When I wrote the entry about the "chicken tractor" that Tom built for the new chicks after they outgrew their brooder, we fully intended to leave them in the tractor until the fall.

However, the chicks were using the nest boxes in the coop part (the enclosed little house on the end) as roosts.  If you know anything about chickens, you know that they "poop" while they roost, so the nest boxes were getting really nasty.  Even though the coop had roost bars, they insisted on using the nests as perches on which to roost.  This was not a good situation.  We did not want them to get used to soiling the nest boxes.  Otherwise, when they begin laying eggs, it would lead to unsanitary conditions for the eggs to be laid in.

As a result, we decided to move them in with the older chickens last week.  Our grandson was here last week, so he got to help with the move.  He and Tom pulled the tractor over to the chicken coop. 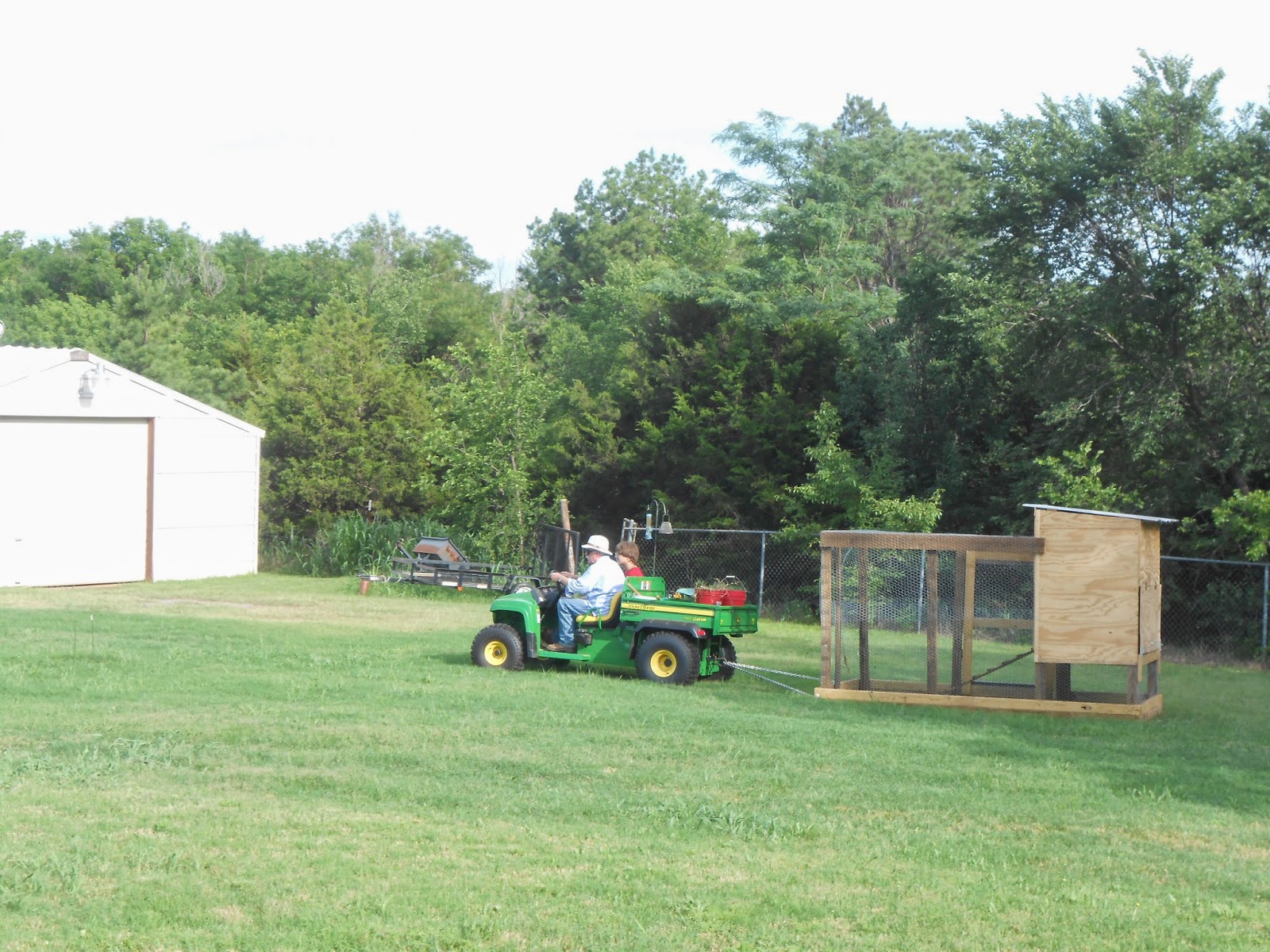 There was really no way to pull the tractor right up to the gate to the chicken pen, so we caught the young chickens and put them in a dog crate to transport them from the tractor to the pen. 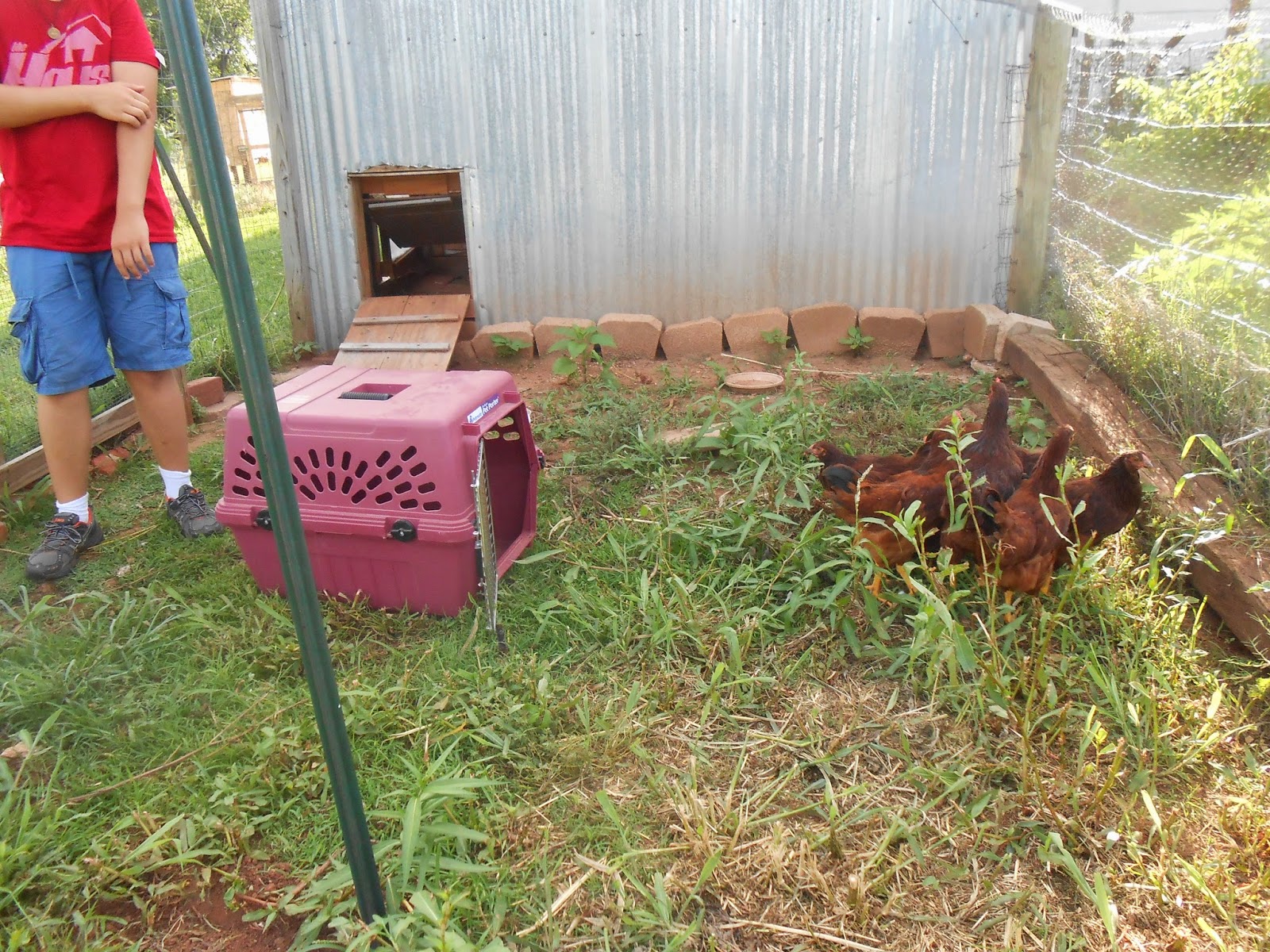 Our outside chicken pen is divided into 2 sections, both covered with bird netting to keep the chickens in and things like hawks out.  Because we were concerned about how the older hens would react to the new-comers, we shut them out of the main pen. 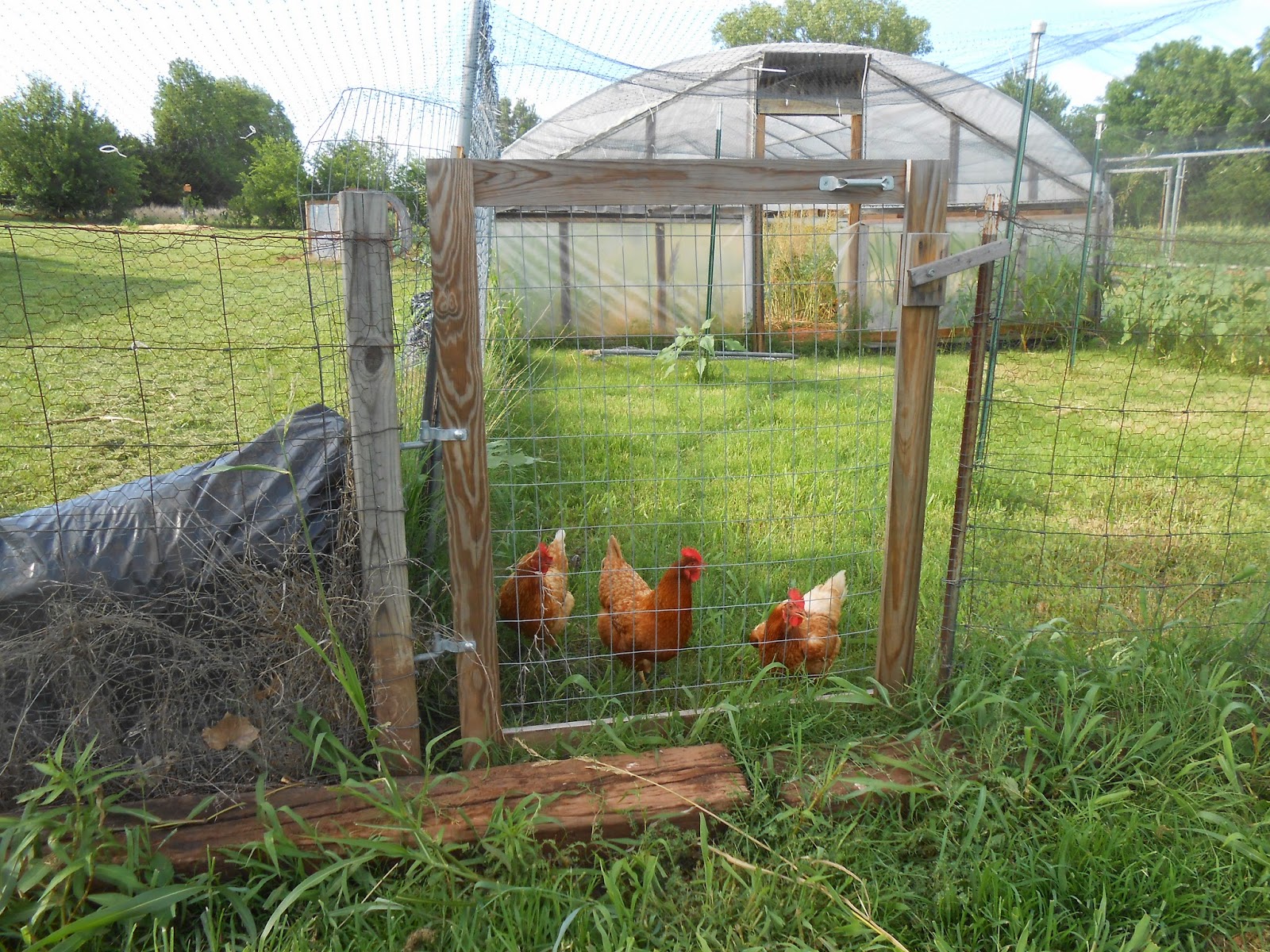 After being let out, the youngsters spent time exploring their new home.  But, they tended to stayed together in a tight group. 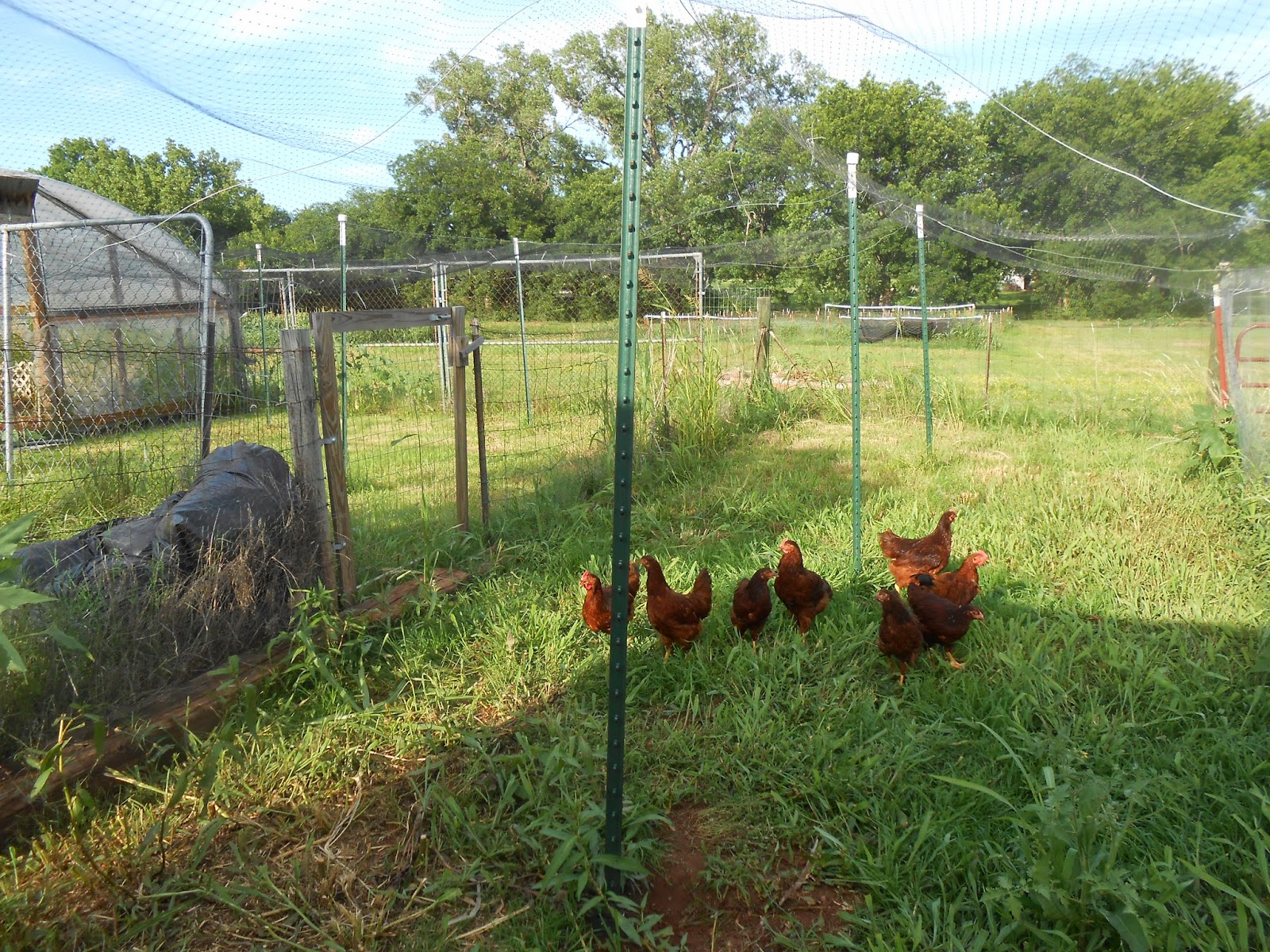 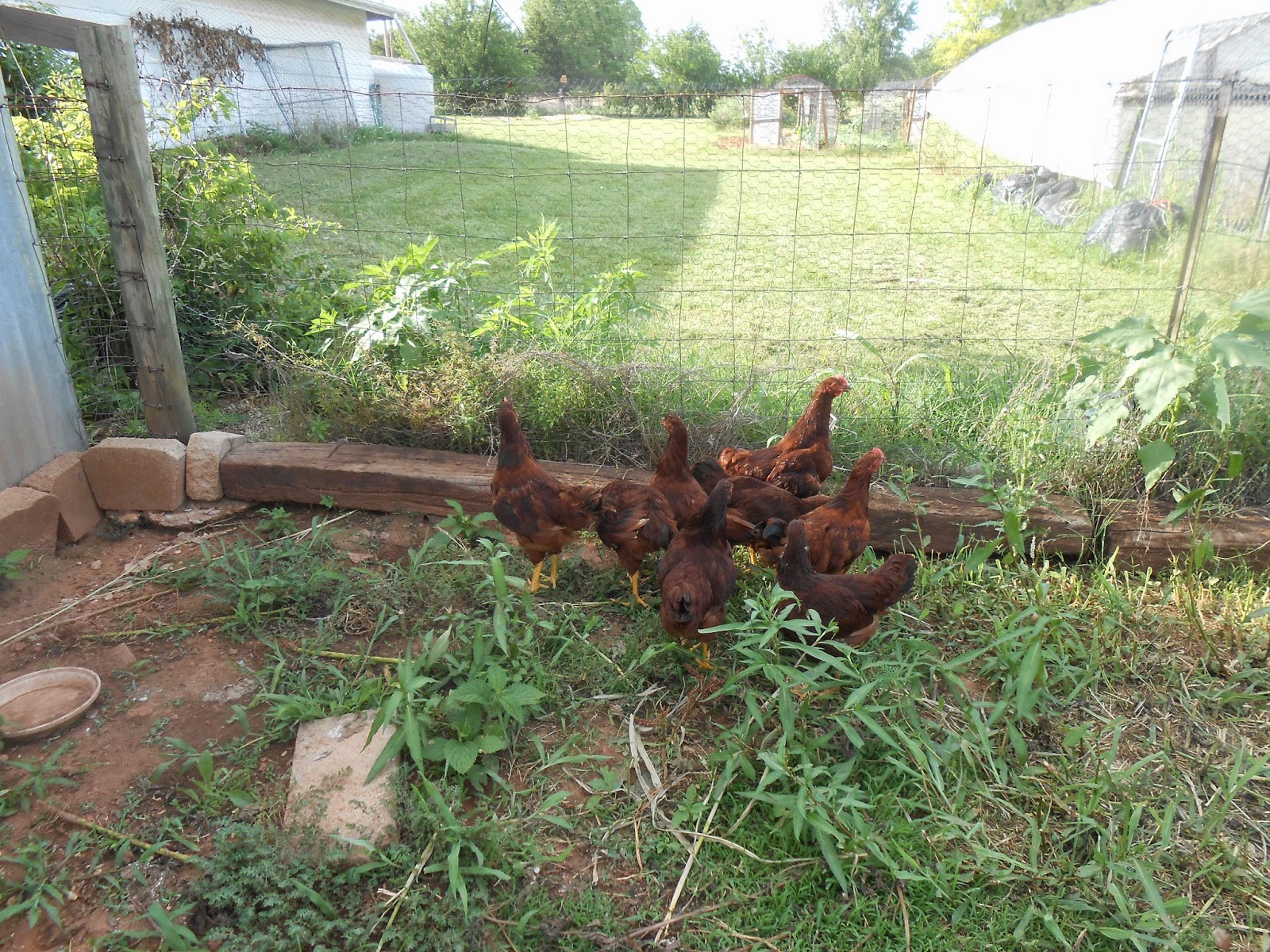 The first night went pretty well.  The old hens seemed to ignore the newcomers and went in to roost as usual.  As it got dark, the youngsters went in as well.  But, they seemed to be unsure where they should roost and would hop up on the raised door to the coop.  The door, being slanted, caused them to slip and slide and lose their balance, which in turn caused a lot of commotion.  I finally picked each one up individually and placed them on the roost bars.  This caused some commotion too, but they all eventually settled down to sleep. 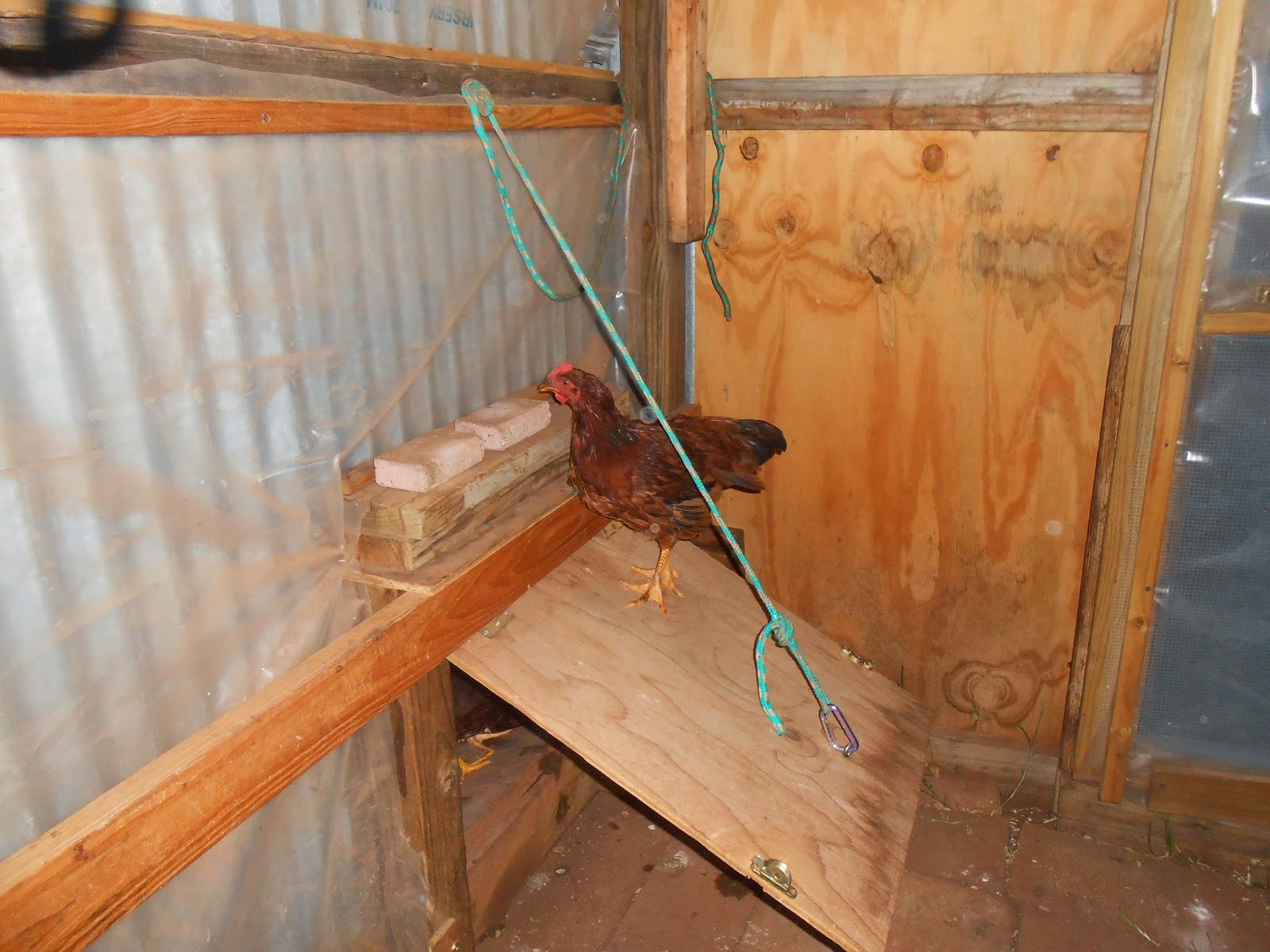 The next day the "pecking order" started.  The older hens began establishing their dominance in the flock, while the youngsters were totally intimidated! 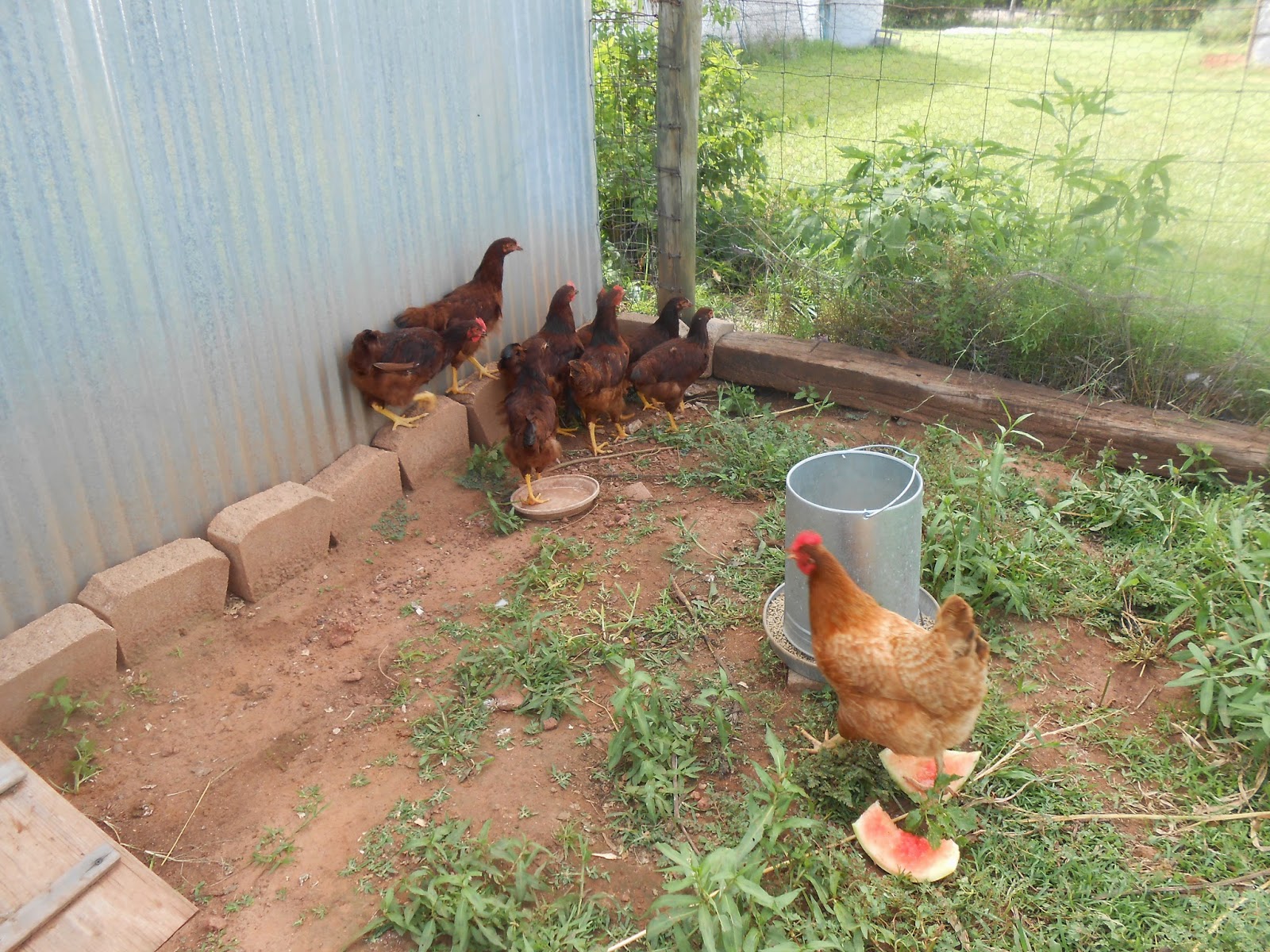 The younger ones ended up staying inside most of the time until I finally closed the door to the coop to keep them out.  If they had a battering ram, I'm sure they would have used it to get back inside and away from "Gertrude". So far, nobody has been hurt and I've not noticed many direct confrontations because the youngsters stick together and try to avoid the older hens.  I suppose order will eventually be restored and everyone will settle down.  Sooner would be nice, rather than later.

Posted by Windy Acres at 7:49 PM No comments:

In Oklahoma, we find it best to plant our garlic in the fall, mulch it heavily and let it overwinter in the ground.  Tom is usually the one who plants the garlic, but being that I was newly retired at the time, guess who was elected for the chore.  I wrote an entry about it.

Here's what the bed in that entry looks like now. 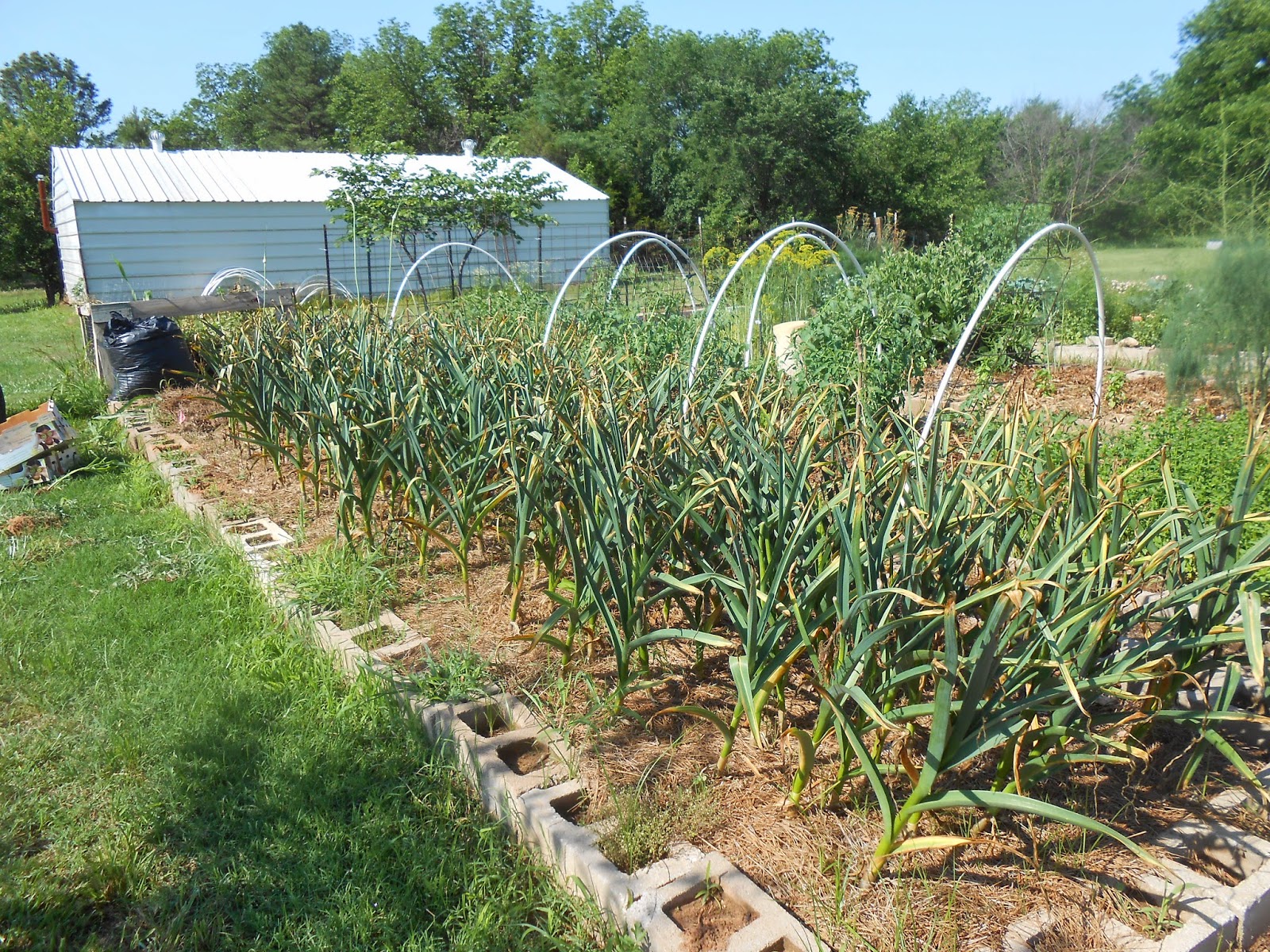 You know the garlic is ready to harvest when the leaves start turning brown and dying, like  you see above.  And, because I was the one to plant it, guess who gets to harvest it this year!

It has rained quite a bit lately, so I found that harvesting it was easy.  I just pulled it up.  No shovel or digging was required.  I harvested only the garlic in the far end of this bed and here is how much I got. 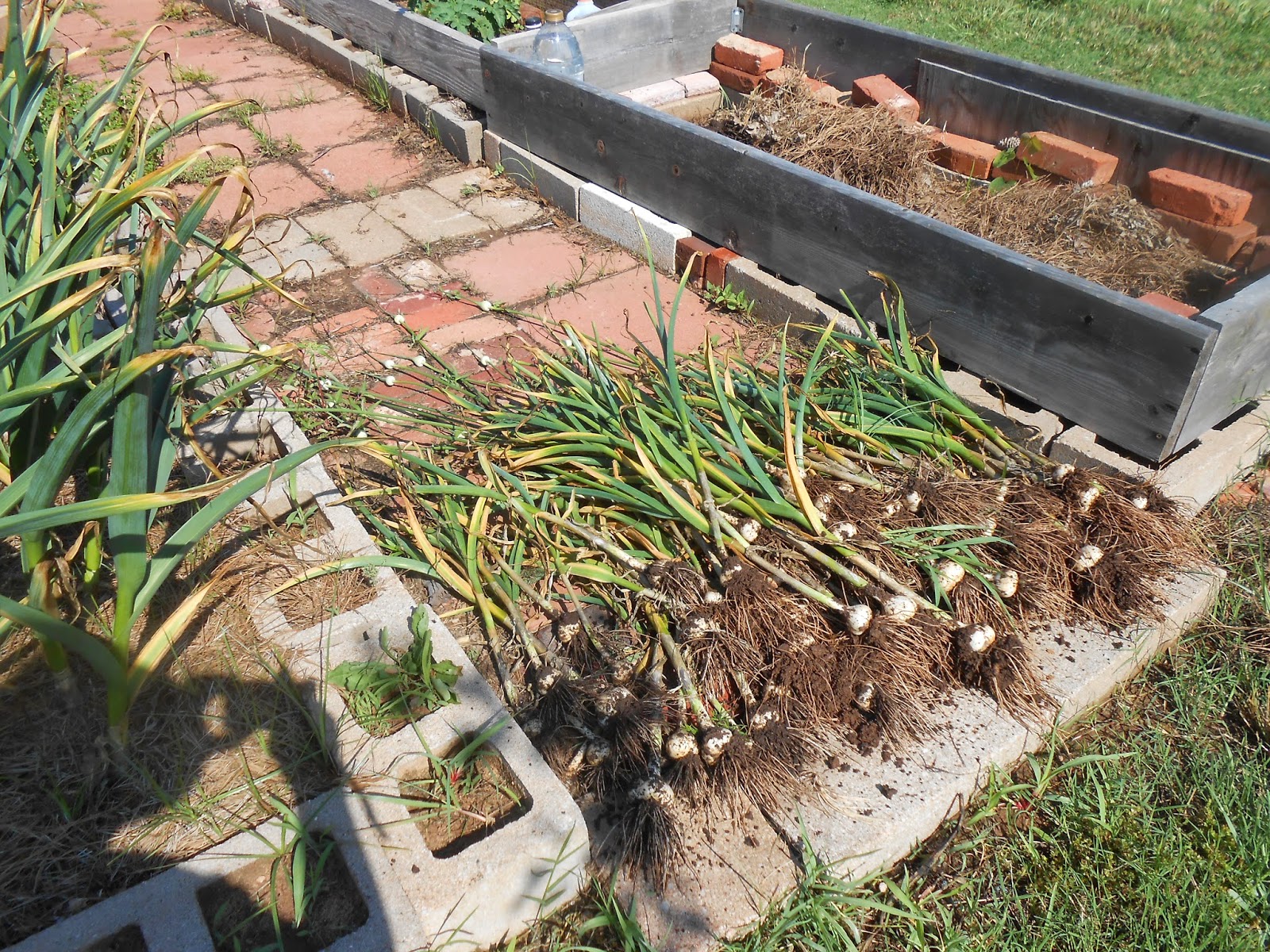 It was pretty muddy and dirty, so I took the hose and cleaned it up. 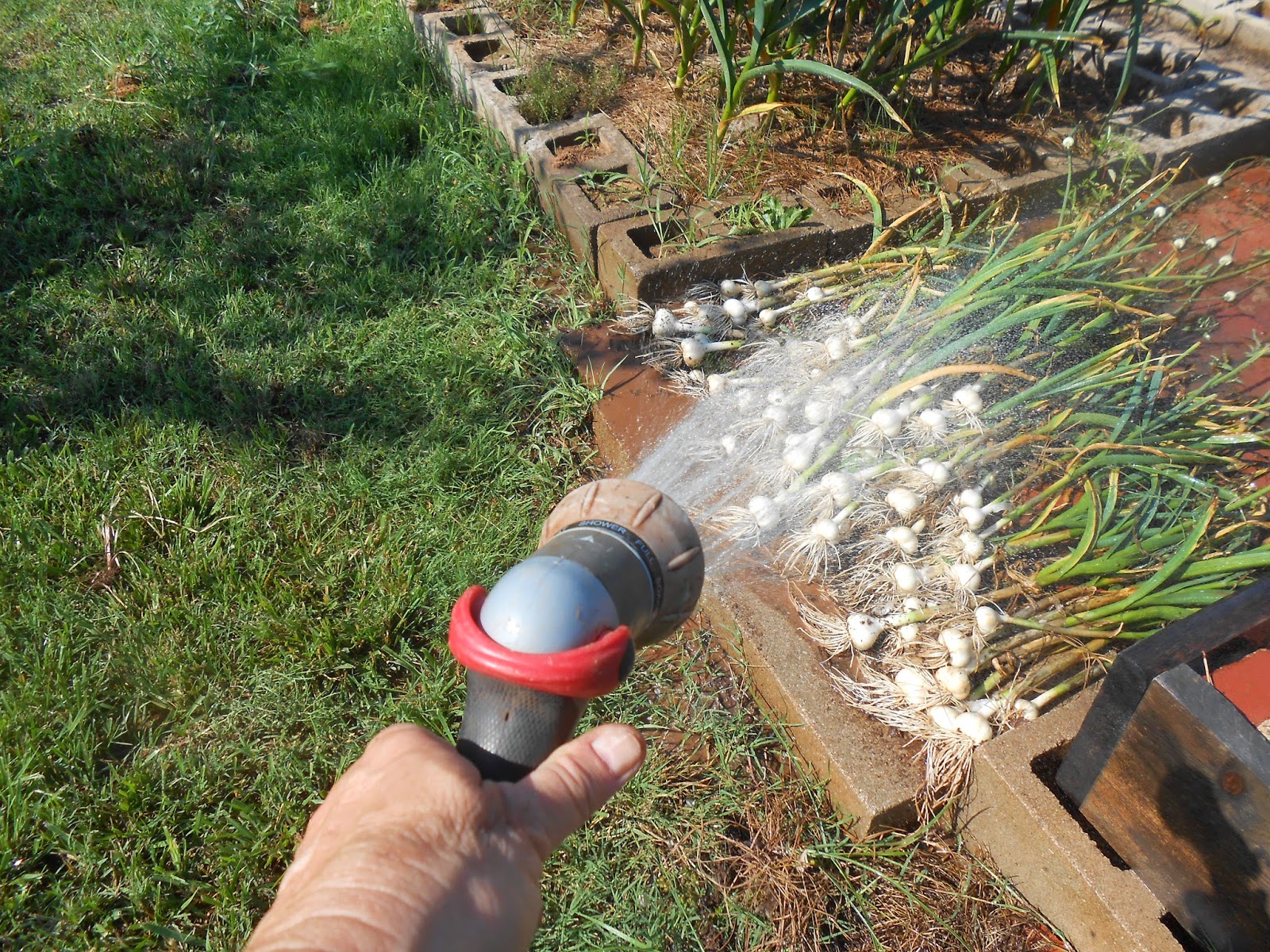 I really like the sprayer nozzle that you see in this picture.  The red thing can be pushed forward to shut the water off and the end of the nozzle turns to create a variety of spray patterns, such as shower, soaker, jet, stream, etc.

Some of the garlic had seed heads, like this. 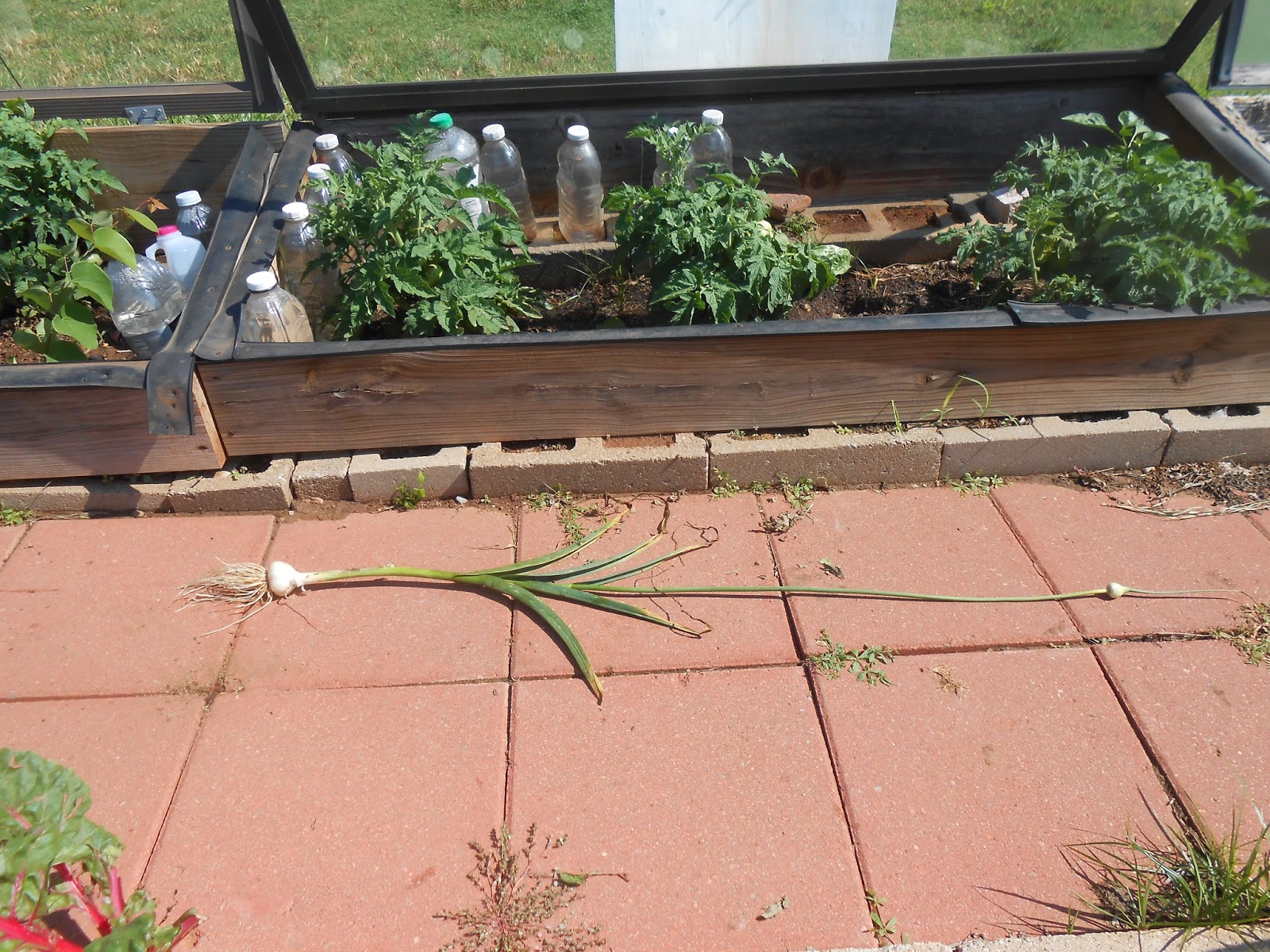 If left alone, the "ball" on the end would break open and create a flower from which seed would form.  These are called "scapes" and we cut them off so that the plant will concentrate its energy into forming the root portion and not on making seed.

Garlic scapes have a mild garlic taste and are considered a delicacy in some areas.  Only the 3 or 4 inches below the flower bud are eaten.  This part of the stalk is fairly tender and can be chopped to be used in stir-fries and other recipes calling for garlic.  One person that I know makes a sort of garlic "pesto" out of these.

Here's a closer look at one of the flower buds. 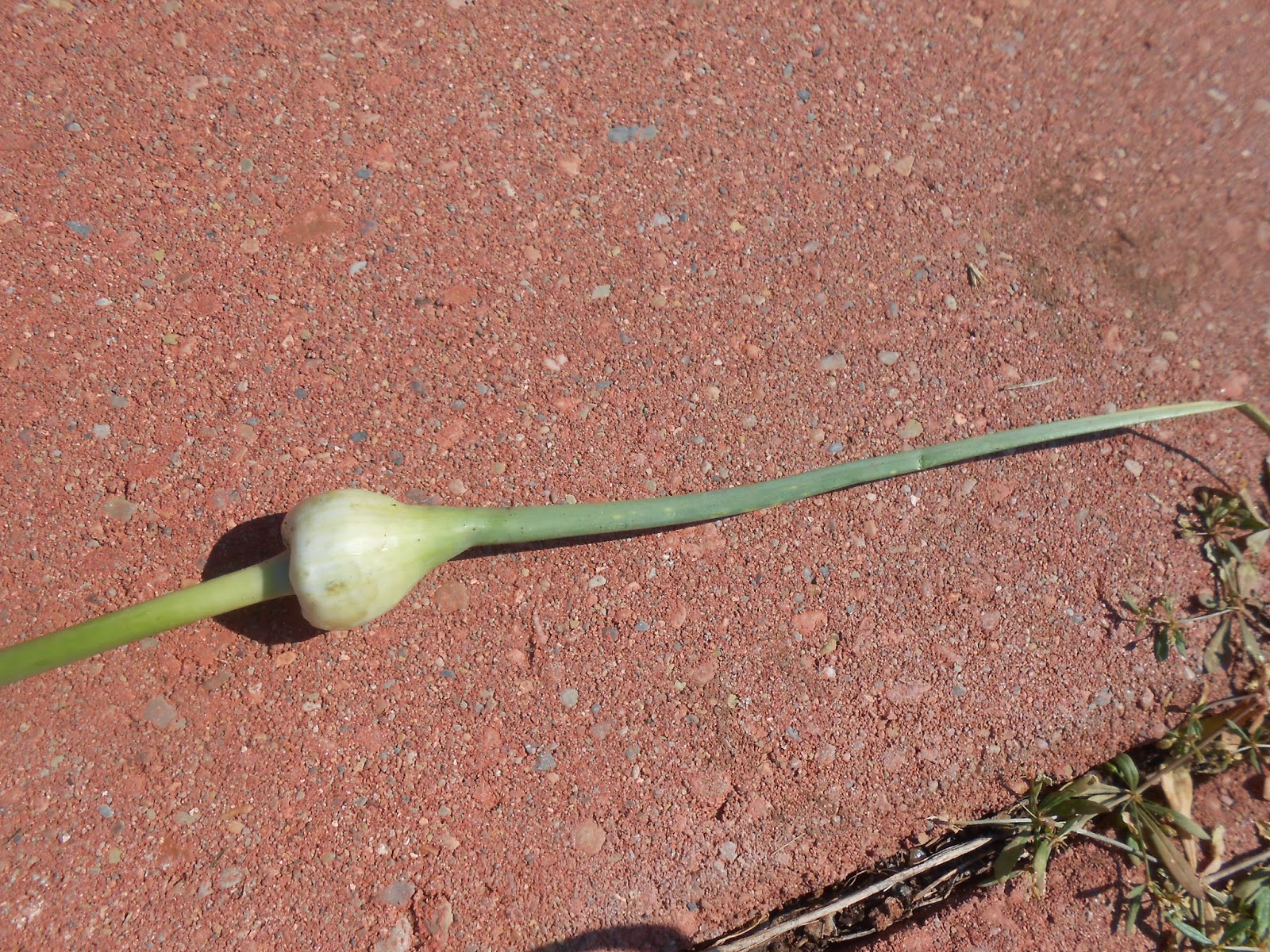 I cut the scapes off and put them in a jar of water on the kitchen counter.  They made a rather attractive arrangement. 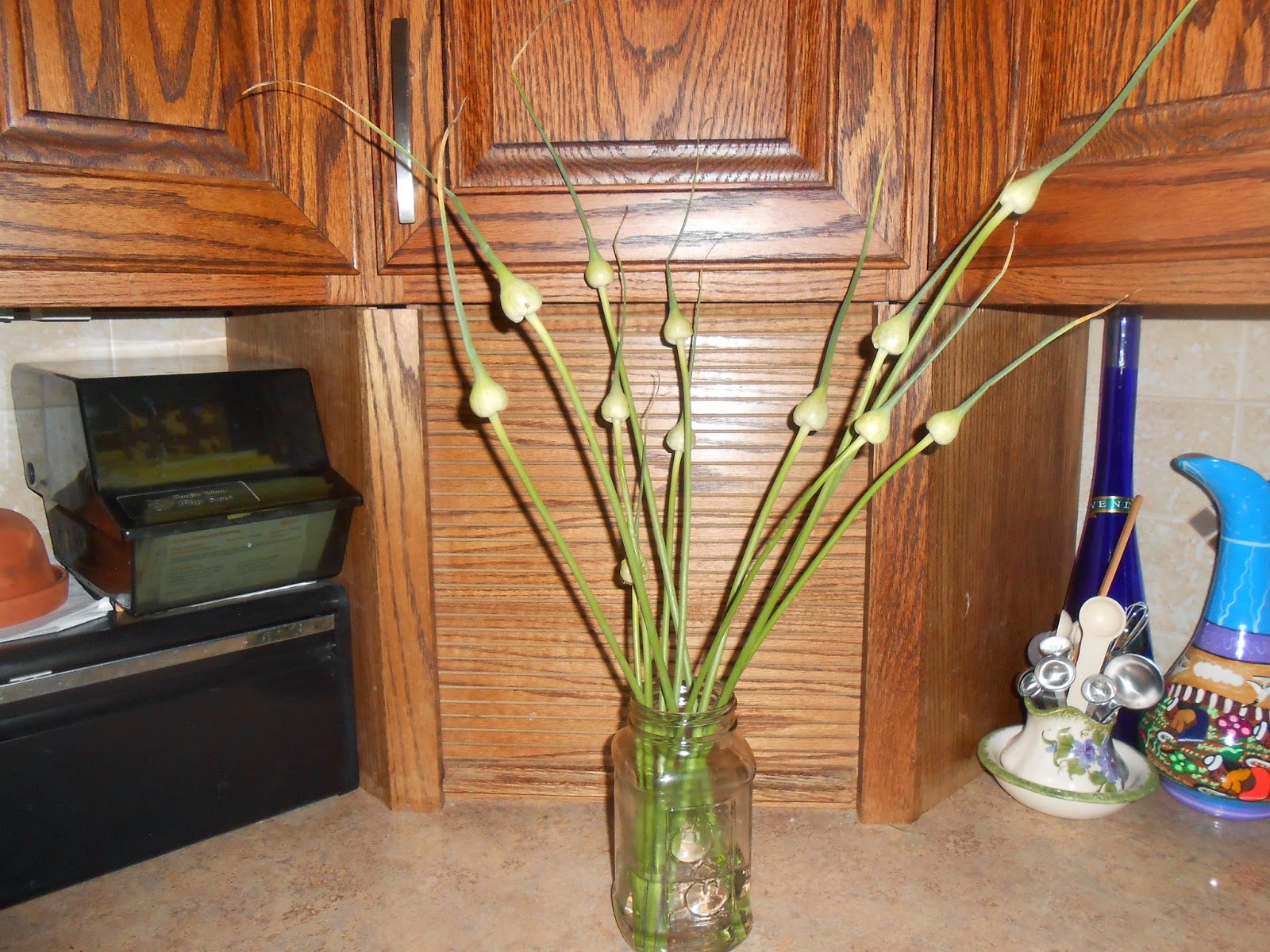 Now, I just need to get energetic and cook something using them.  Oh, yes, and I still have to harvest the rest of that bed.  Sigh.
Posted by Windy Acres at 10:44 PM 2 comments:

In the summer of 2012, I wrote a blog entry about the tomatoes I dried during one of our years of extreme drought.

As you can see in that article, I ended up with a jar full of dried tomato slices.  I put these on a shelf in my pantry intending to find a recipe in which I could use them.  Unfortunately, other canned goods got put on the shelf in front of them and they were "out of sight, out of mind".  I forgot all about them until I ran across them earlier this spring when I was cleaning out my pantry!

I was disgusted with myself.  Sigh.  However, upon closer inspection, they appeared fine.  The jar they were in had a rubber seal and they had not been opened since the day I put them in the jar.   So, now, what to do with them?

I recalled reading somewhere that you could grind dried tomatoes into a powder that could be used in chili, meatloaves, soups, sauces and so forth.  This is what I decided to do with them.

I dug out my coffee grinder (which I have not used to grind coffee beans in years). 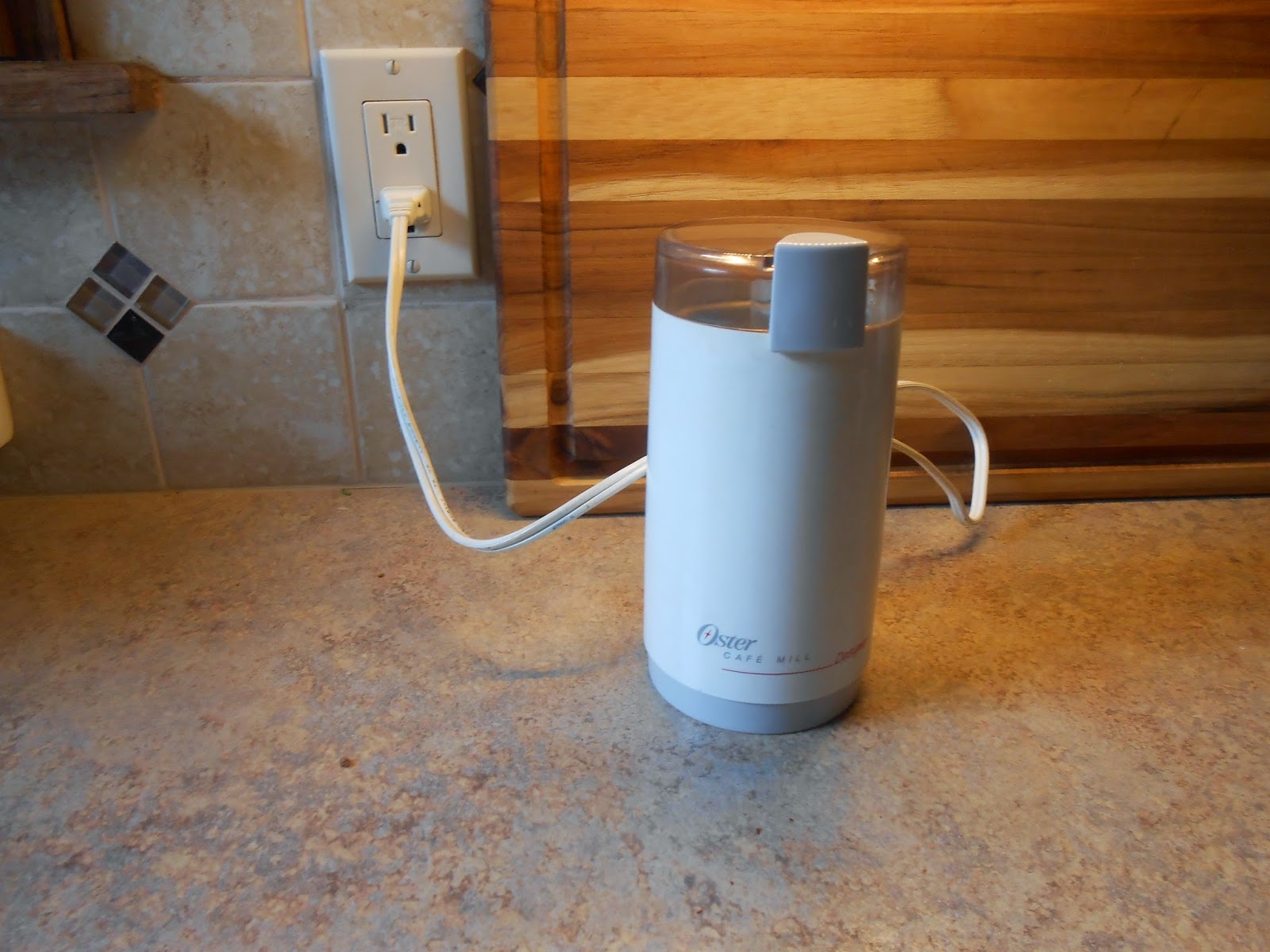 I generally use it to grind dried herbs into powder.  But, this time I loaded it full of the dried tomato slices and whirled away.  This is what they looked like afterwards. 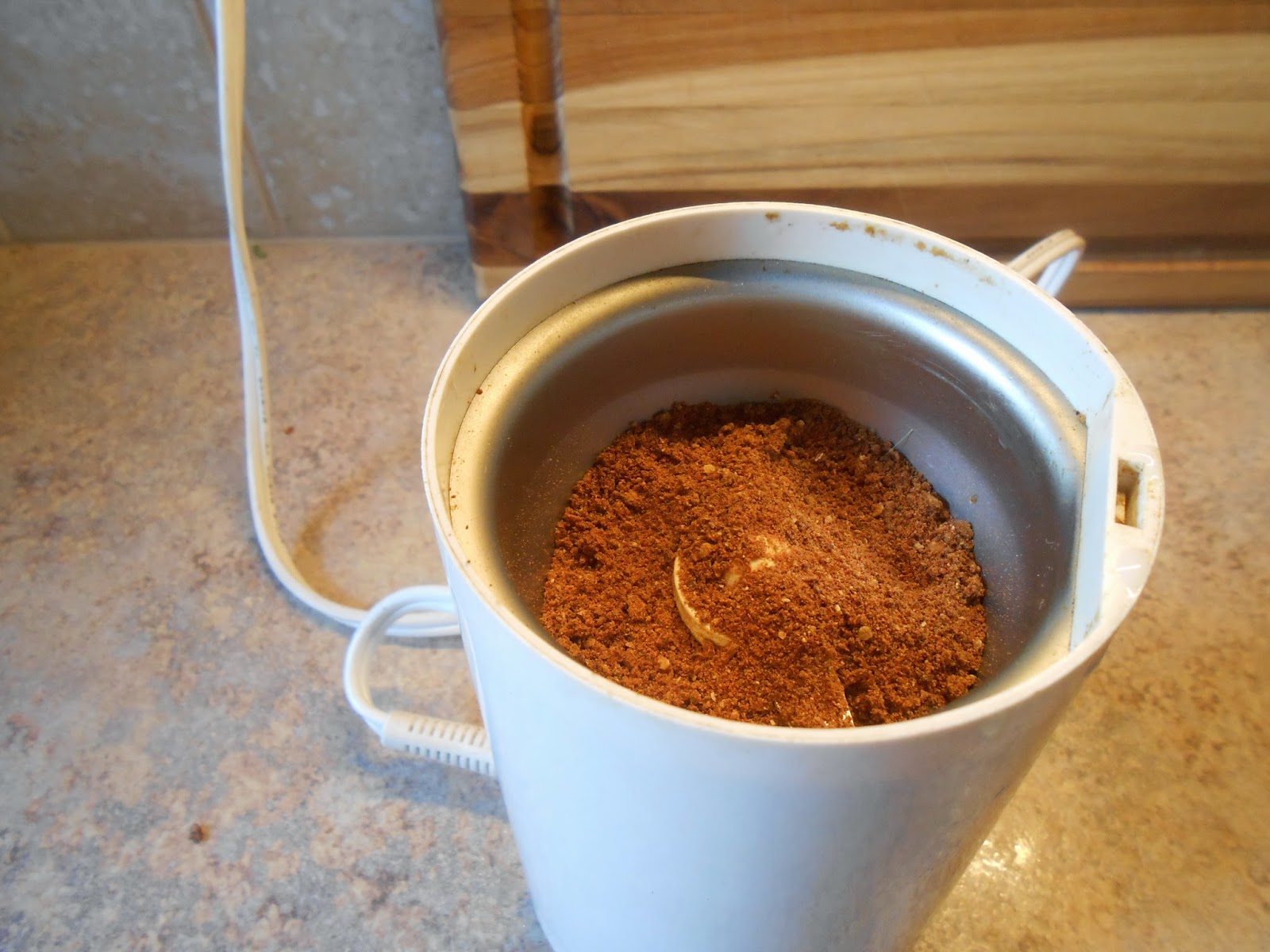 I could only grind a few tomatoes at a time, so it took several batches to get them all processed.  To store the powder, I used an empty spice jar that I saved after the spice was gone and labeled it with the new contents.  Okay, so I probably could have used better penmanship when labeling the jar.  I'm sure I was in a hurry to finish cleaning my pantry.  Ha!  NOT. 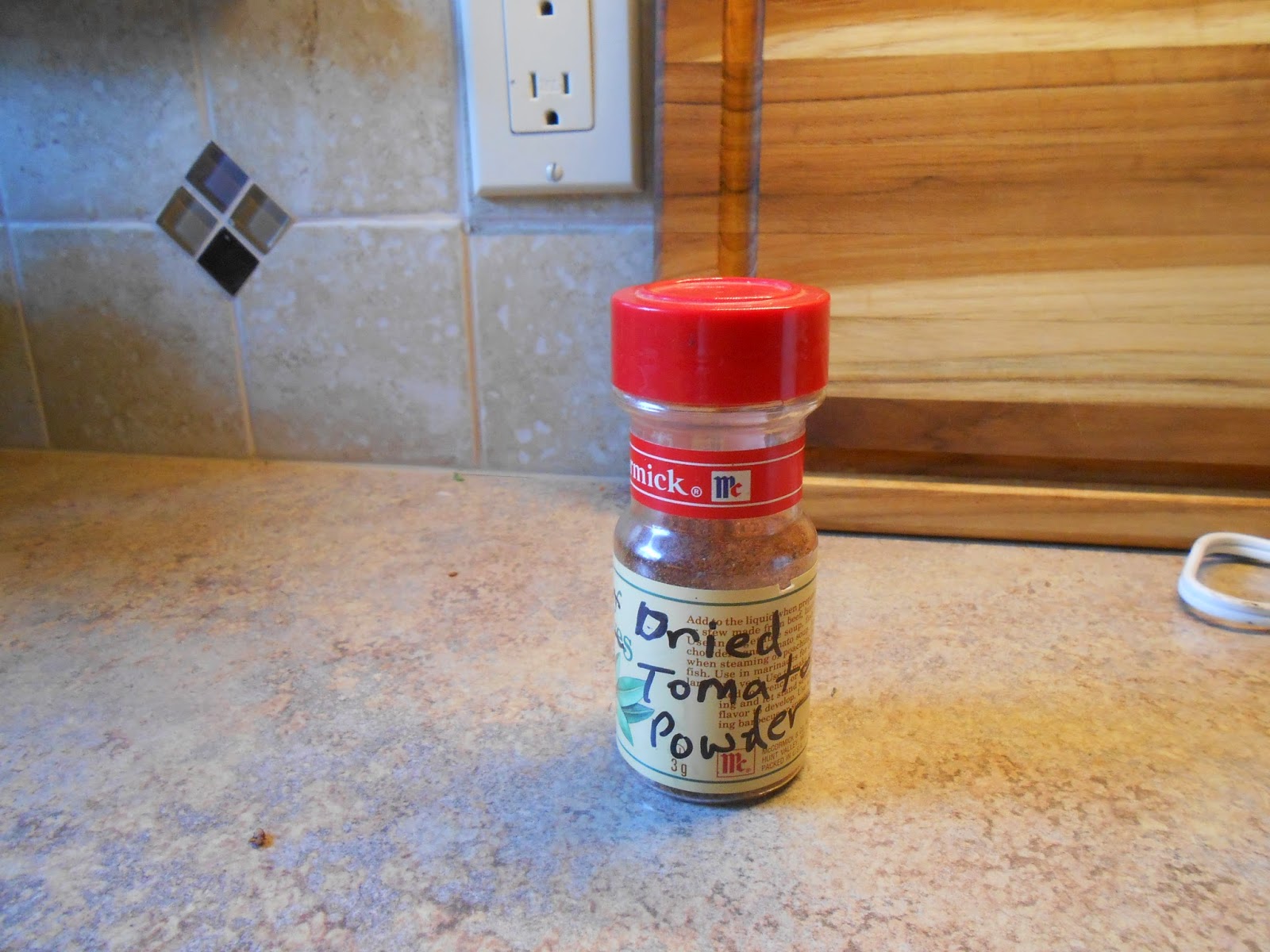 I've put the jar with my spices, so I see it every time I retrieve the ingredients I need for a recipe.  Hopefully, I won't forget about it.
Posted by Windy Acres at 6:04 PM No comments: