One of our younger chickens recently decided she wanted to roost in the nest boxes.  When Tom went over to shut the coop up, he found her in the nest.  The first couple of times, he just left her in the nest, but we quickly learned that was a mistake.  Chickens produce prodigious amounts of poop during the night which resulted in us having a messy nest box the next morning and having messy eggs to deal with if we didn't get out there before an egg was laid in that box.

One time Tom tried to pick the chicken up and put her over on the roost bar with the rest of the chickens.  But, chickens go into a sort of stupor when they go to sleep, and he was unable to get her to catch hold of the bar with her feet.  So, she kept falling off.

We found several ideas on the internet to thwart this roosting in the nest box behavior.....the simplest being this. 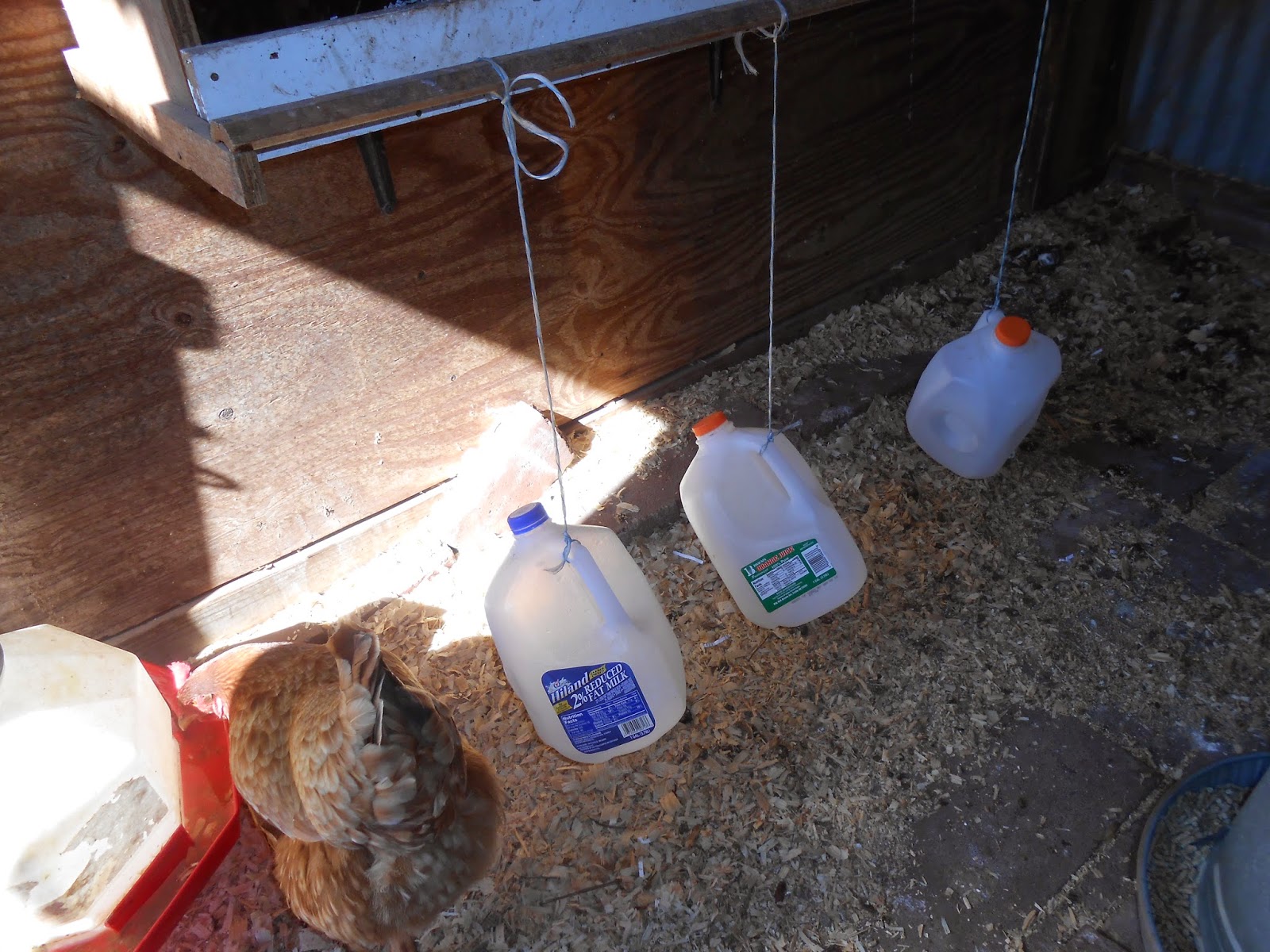 How, you ask, could milk jugs on strings keep chickens out of the nest boxes?  Here's how. 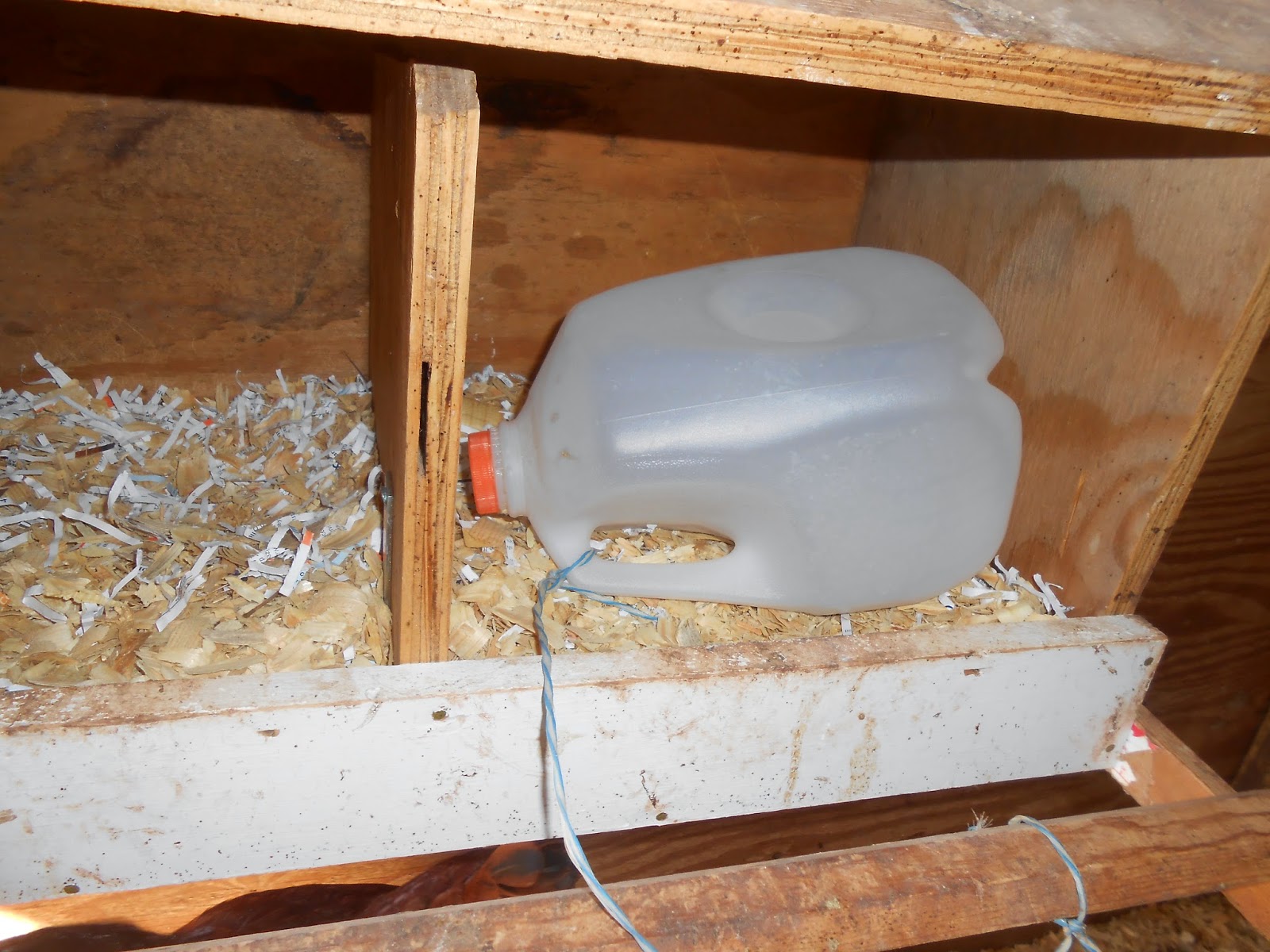 Tying strings to the jugs was just a handy way to keep the jugs in easy reach.  So, late in the afternoon, we simply stuck the jugs in the nests forcing the offending chicken to have to join the other girls on the roost bar at bedtime.

However, this brilliant idea caused another problem.  Chickens wake up a lot earlier than we do and they are ready to get to get down to the day's business before we get over there in the morning.  What's a girl to do if she is faced with a milk jug in her favorite nest box?

Well, where there's a will, there is a way!  Tom arrived to open the coop several mornings to find one of the milk jug hanging on its string and an egg in the nest in its place.  You're probably thinking the same thing we were.....how'd the chicken manage to get the jug out?

Once again, I used our wildlife camera to solve the riddle.  What follows is the sequence of photos that document what happened. 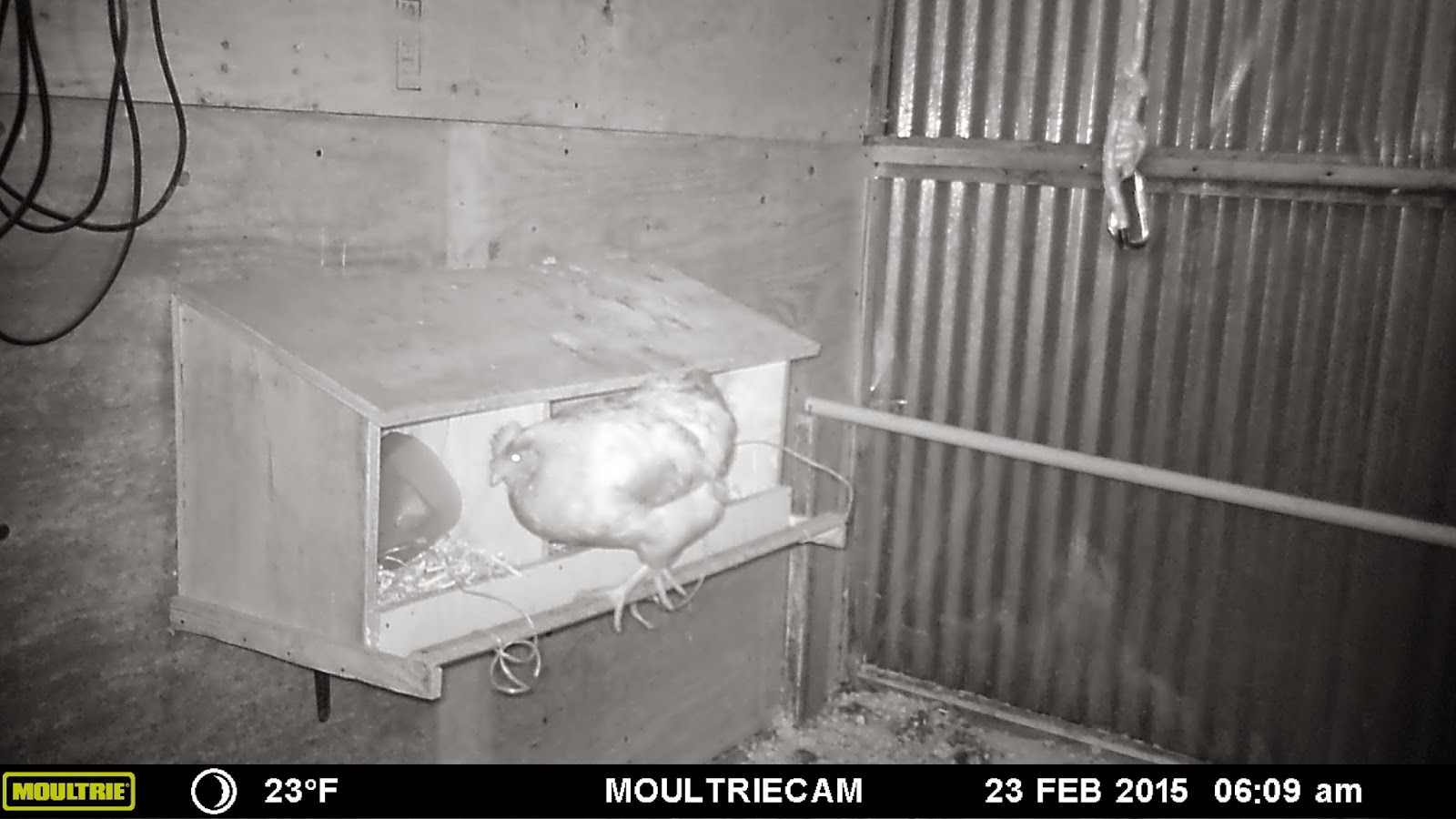 Chicken gets on nest box bar. 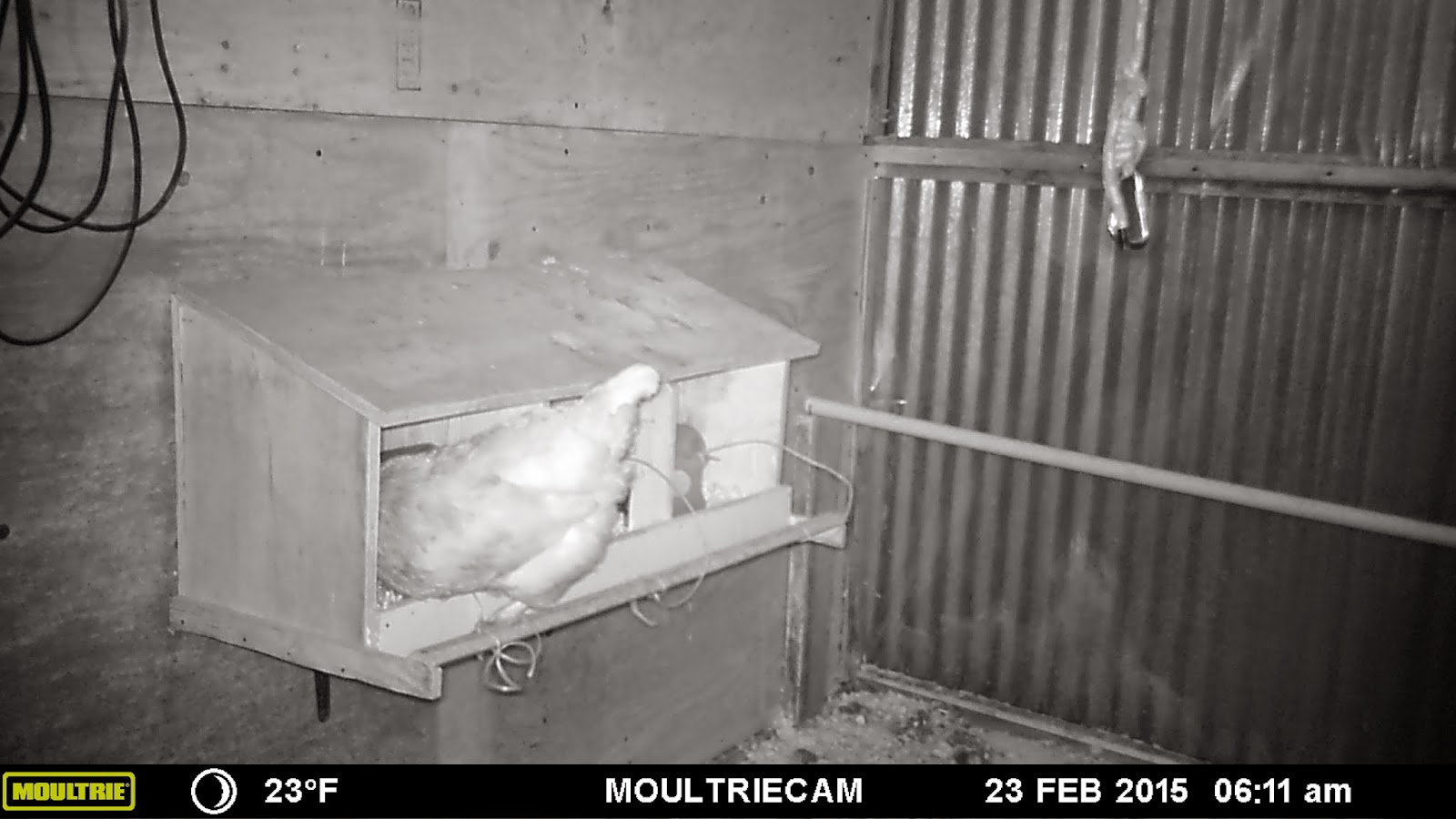 Chicken enters nest box and maneuvers around the milk jug. 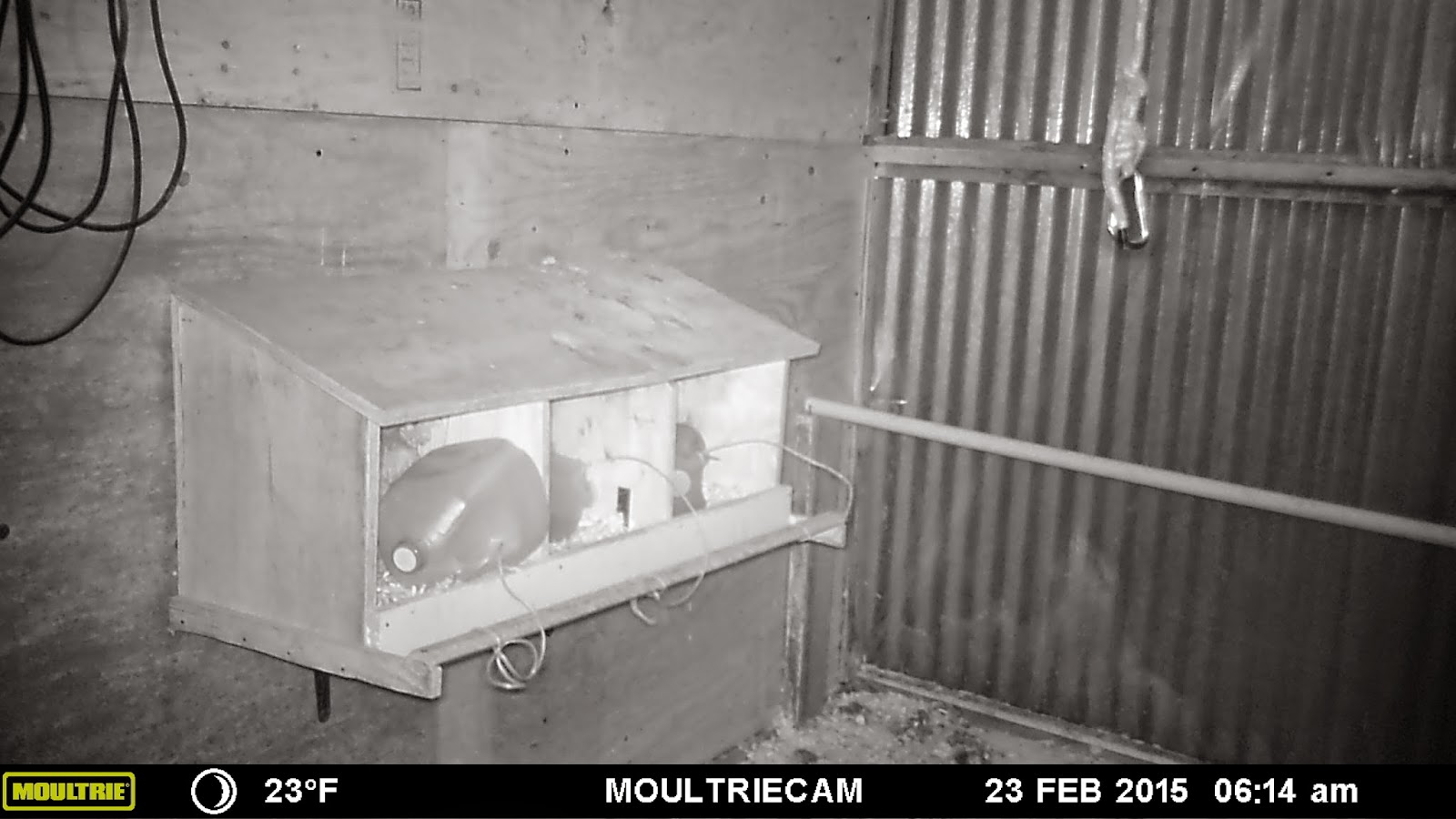 Chicken is in the nest box with the milk jug. 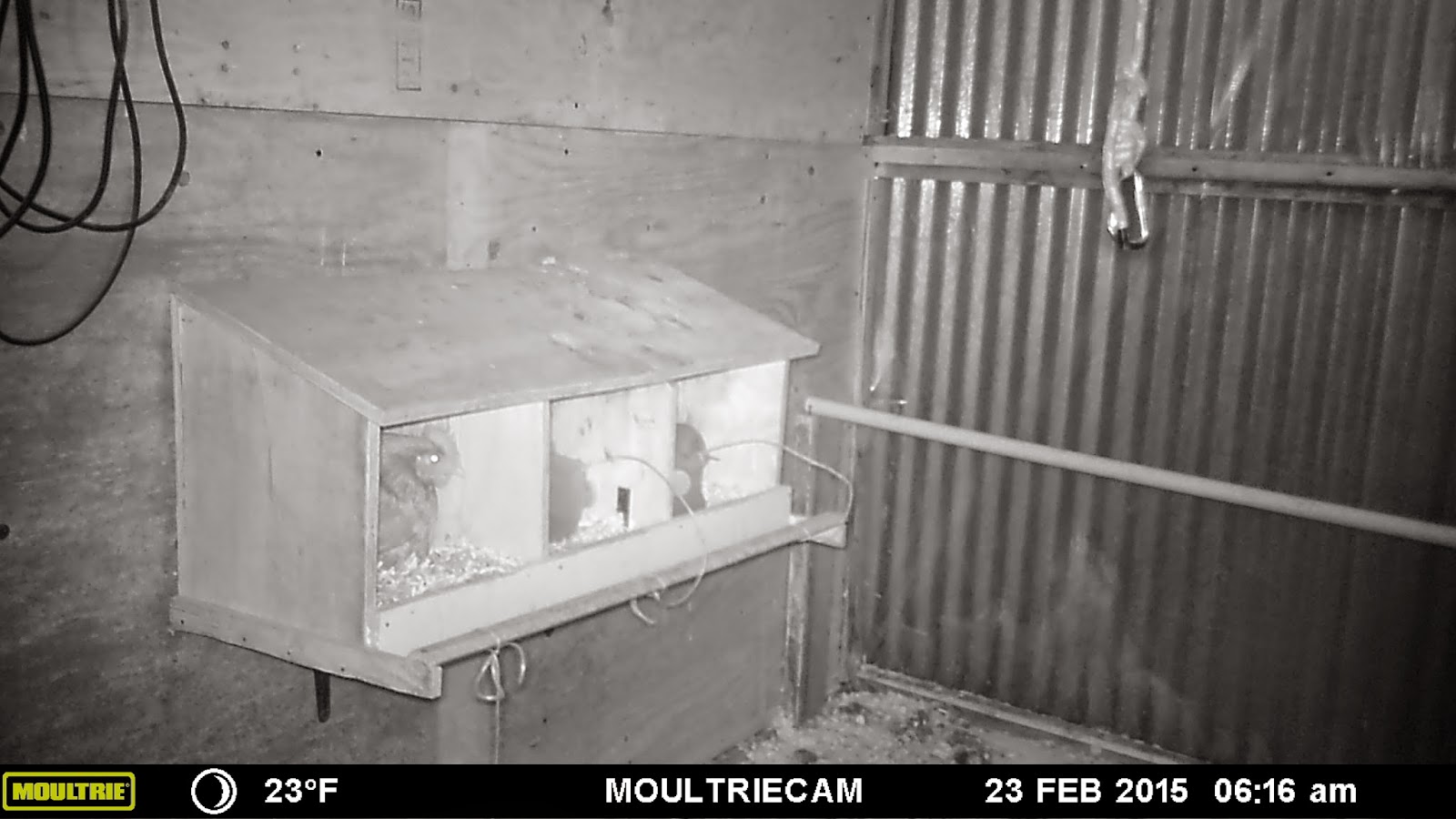 Now, who said chickens were dumb!  I suspect after another couple of weeks, we can get rid of the milk jugs.  I think perhaps the reason the issue started in the first place is due to the cold weather we've had lately.  We've had some snow and very cold temperatures, especially at night.  I imagine sleeping in a warm nest box is more attractive than sleeping on a roost bar in an un-insulated coop.
Posted by Windy Acres at 12:28 PM No comments:

Gardening is hard on jeans as evidenced by the following picture. 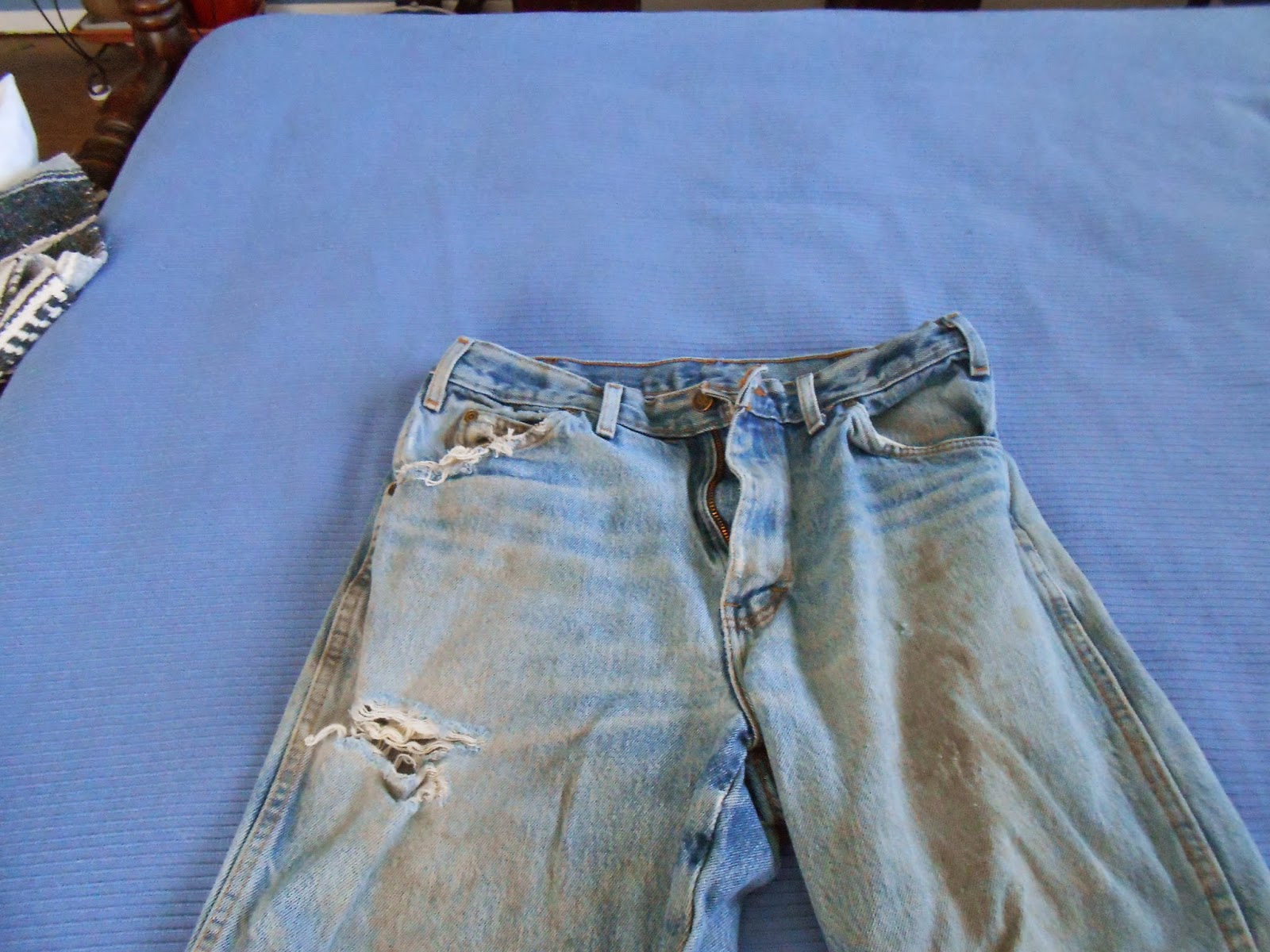 A friend who knows that we garden sent me a really cool way to use old jeans to make a handy gardening apron.  Here's what you do.

First, cut the band off the front of the jeans.  Then, cut down the side seams, like this. 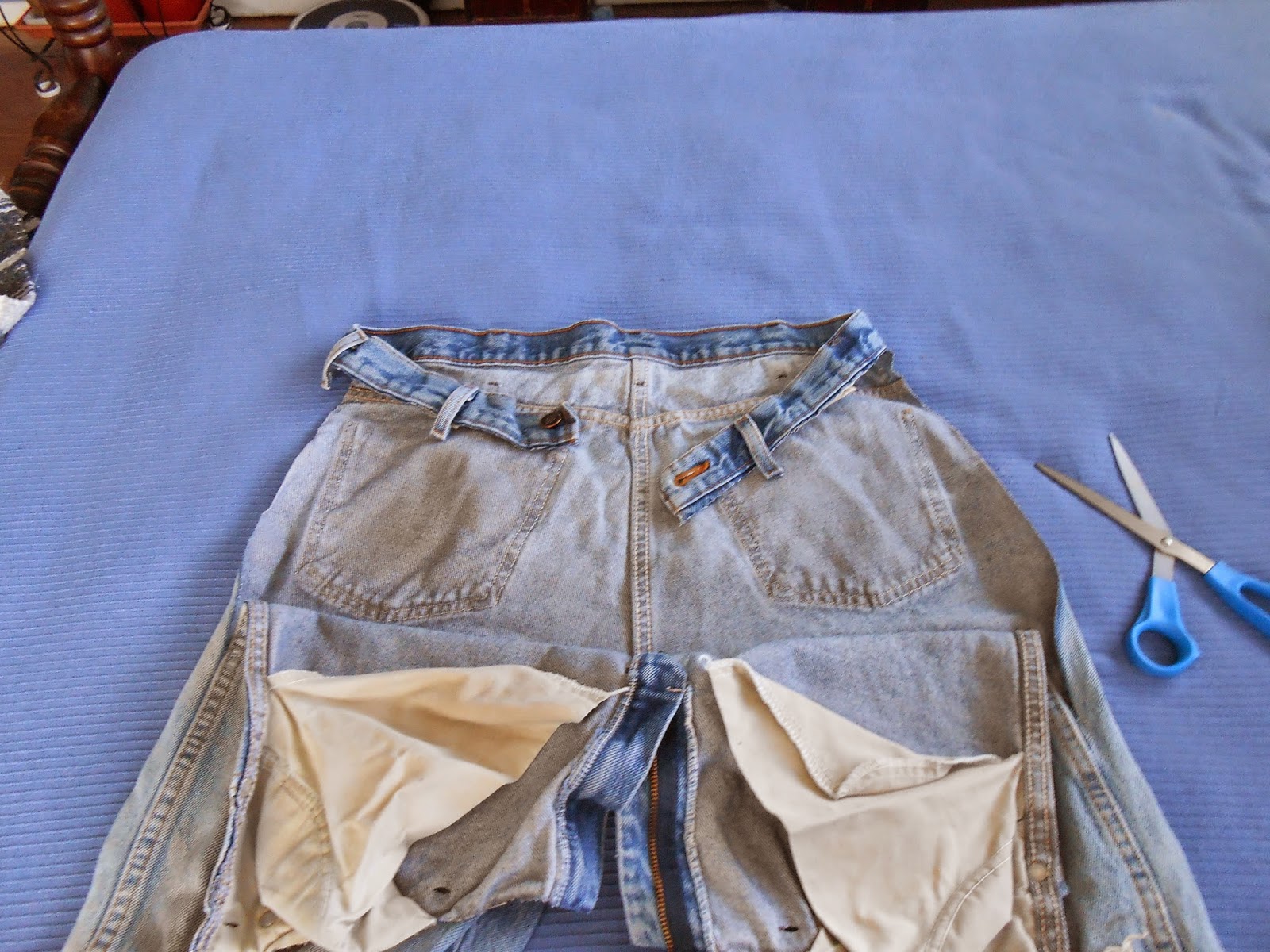 Next, turn the jeans over and cut a straight line across the seat of the jeans, below the pockets. 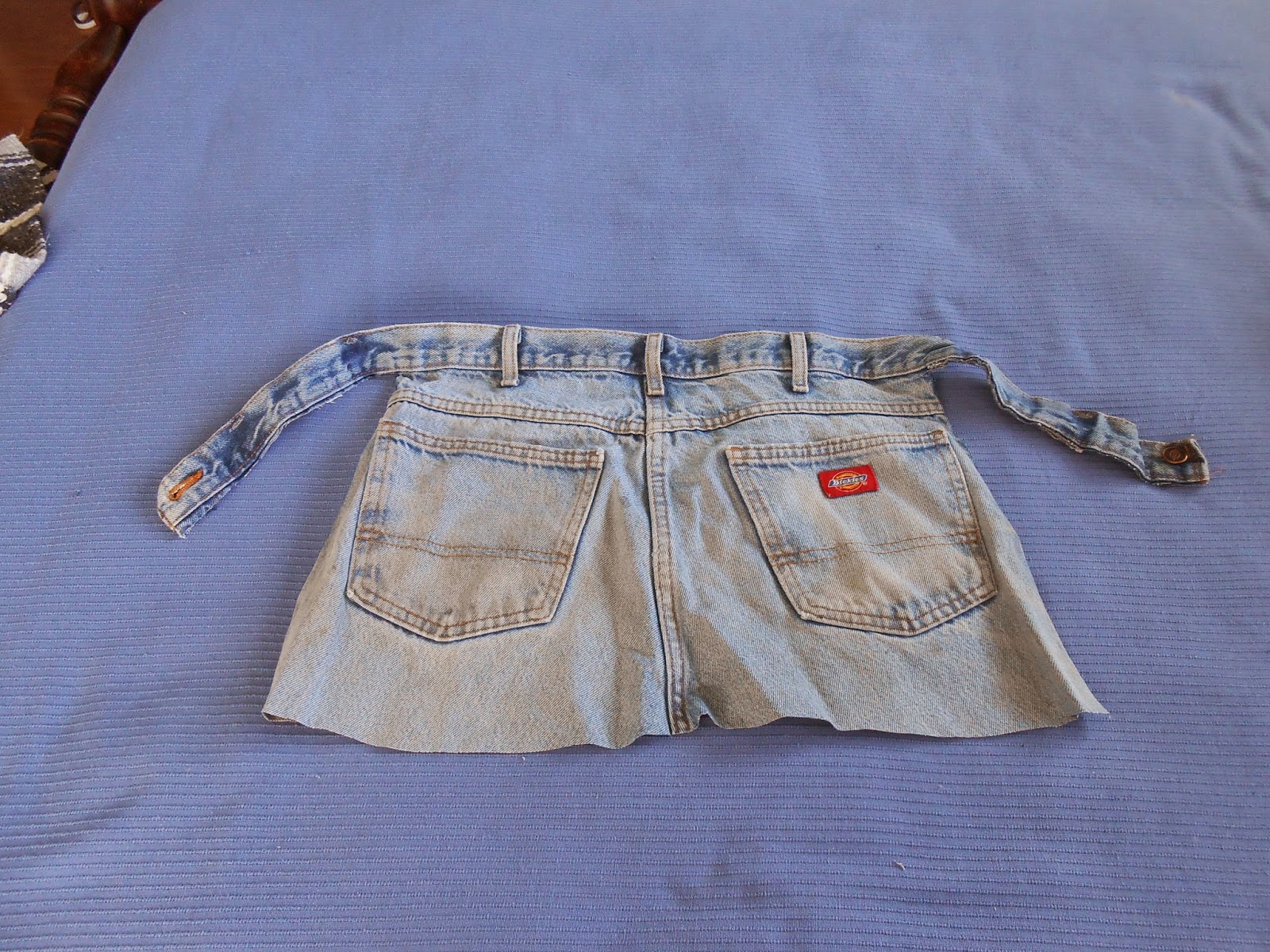 Now you have a neat little garden apron.  The pockets are just the right size for clippers, gloves and other garden tools. 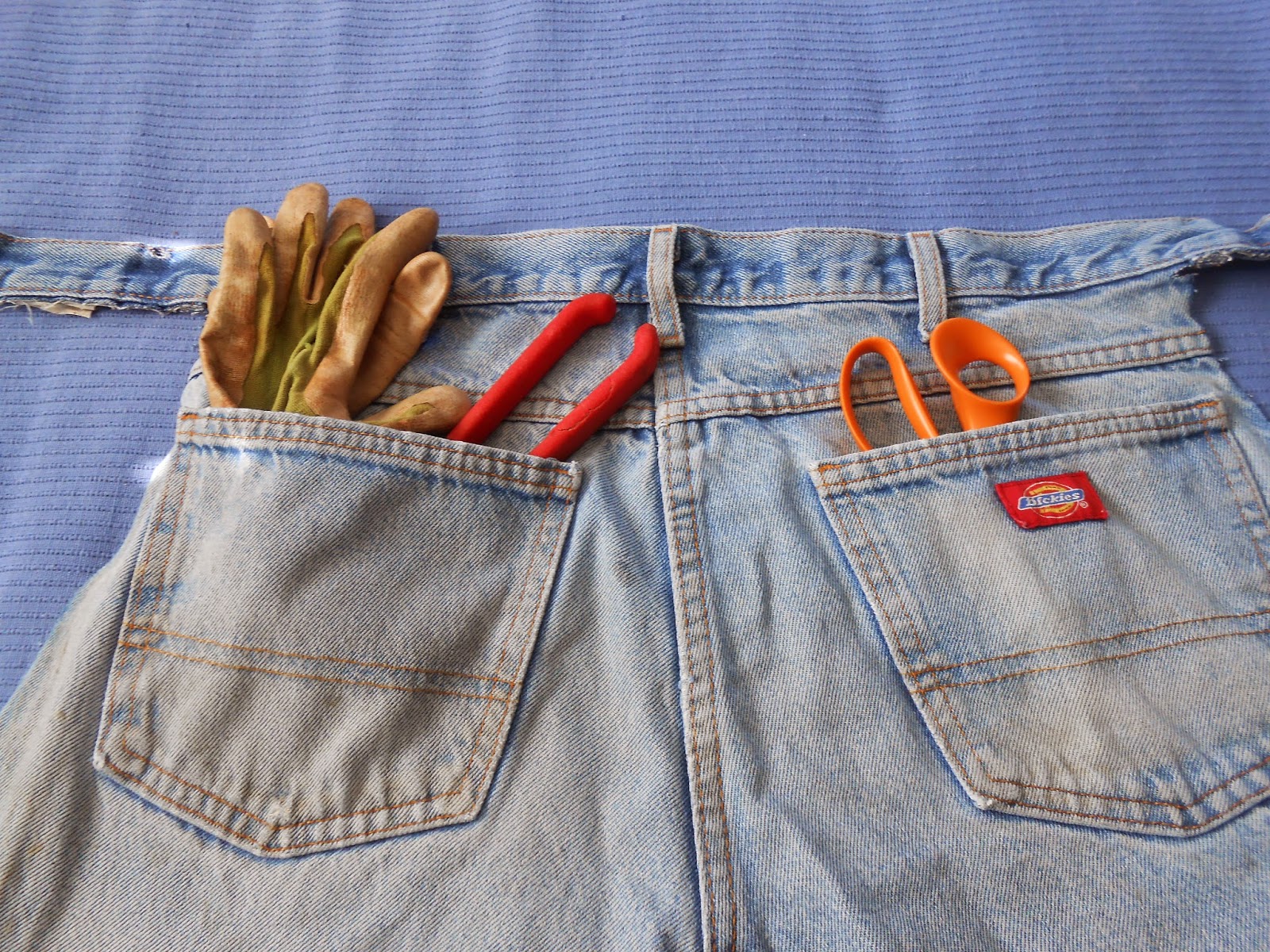 You should button it in back so the pockets are in front where you can easily get to the tools.
Posted by Windy Acres at 5:47 PM No comments:

Garlic for the Garden

The 2015 garden season has not even started yet and here we are looking toward what we are going to plant this fall.  Why?  Because yesterday we received the Filaree Garlic Farm catalog. 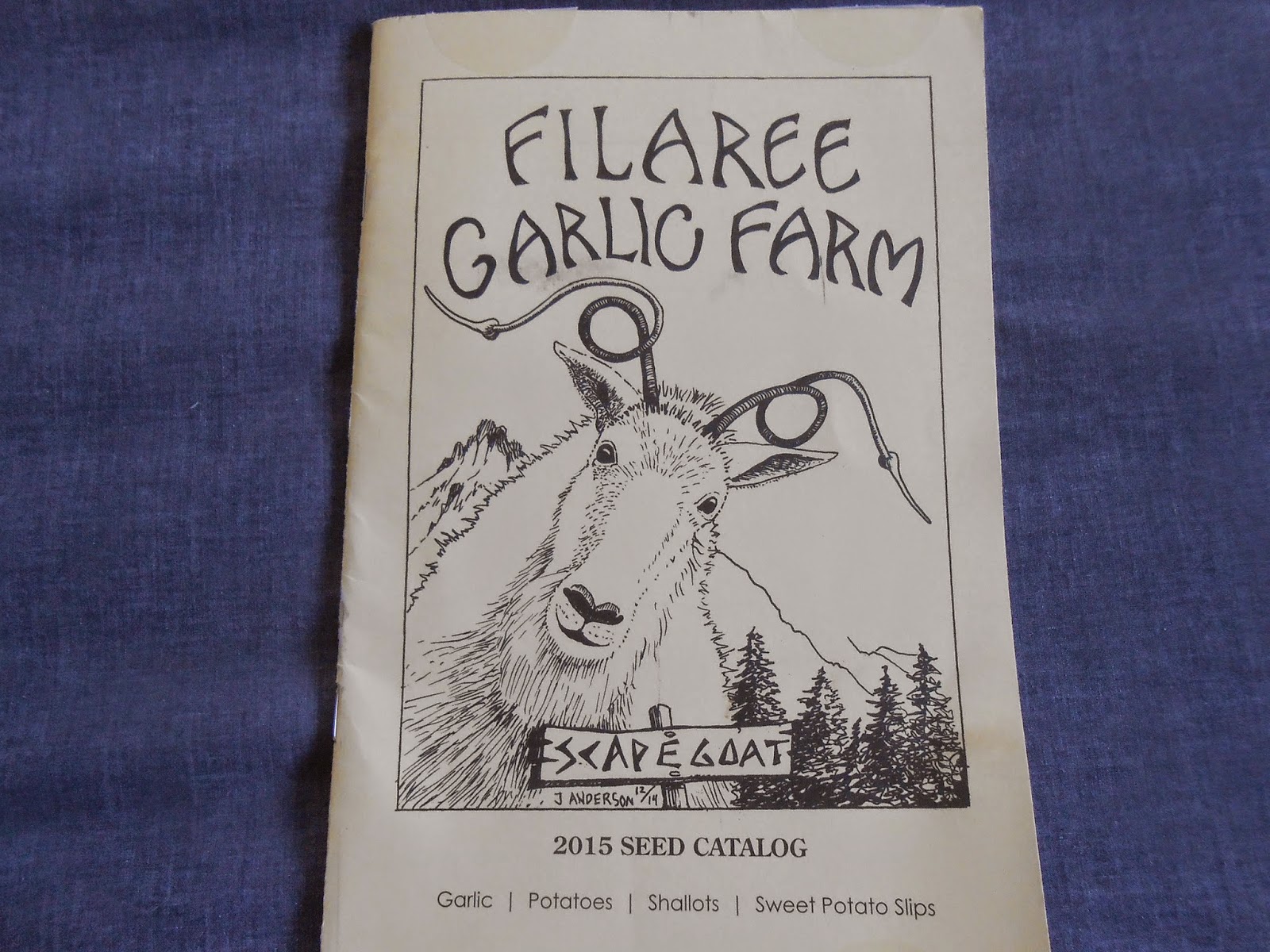 You see, the best time to plant garlic in Oklahoma is in the fall.  We usually plant it in October.  That gives it enough time to take root before winter sets in.  One would think that we could wait until the end of summer to order it.  However, many of the varieties in this catalog sell out early.  So, if we want to get the best selection, we have to order now.

I've written several blog entries about garlic.  Here's one from June last year when I dug the garlic we had planted the previous fall.

Most of us are familiar with the rather mild tasting soft-necked garlic that we buy at the supermarket.  But, did you know there are many different varieties of garlic?  Some of them are fiery hot, as well, with names like Georgia Fire!  Here is a sampling from the Filaree catalog. 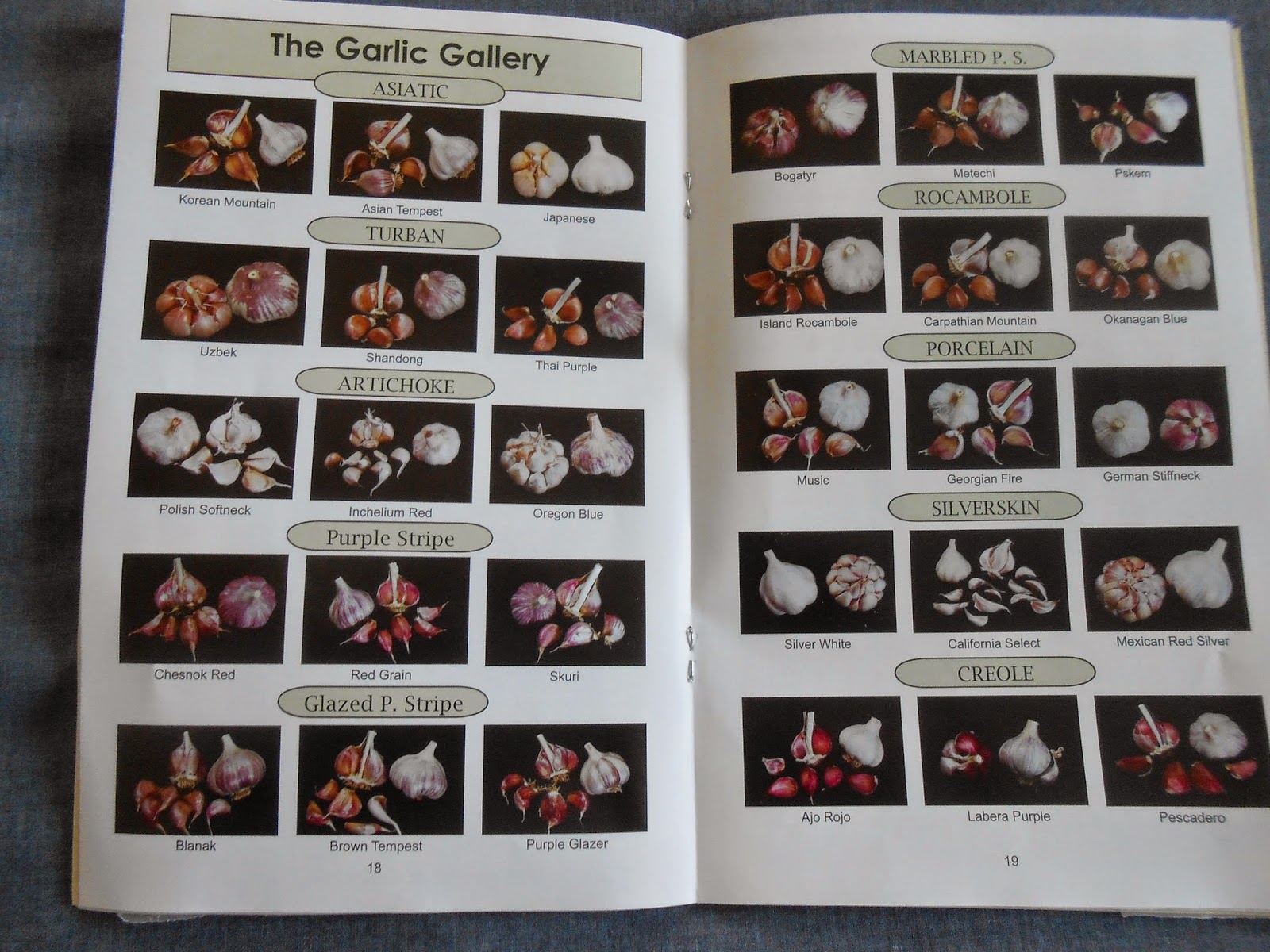 Most of these are "hard-necked" garlic which have a stiff stem around which the cloves grow. Here's a closer look at a couple of those. 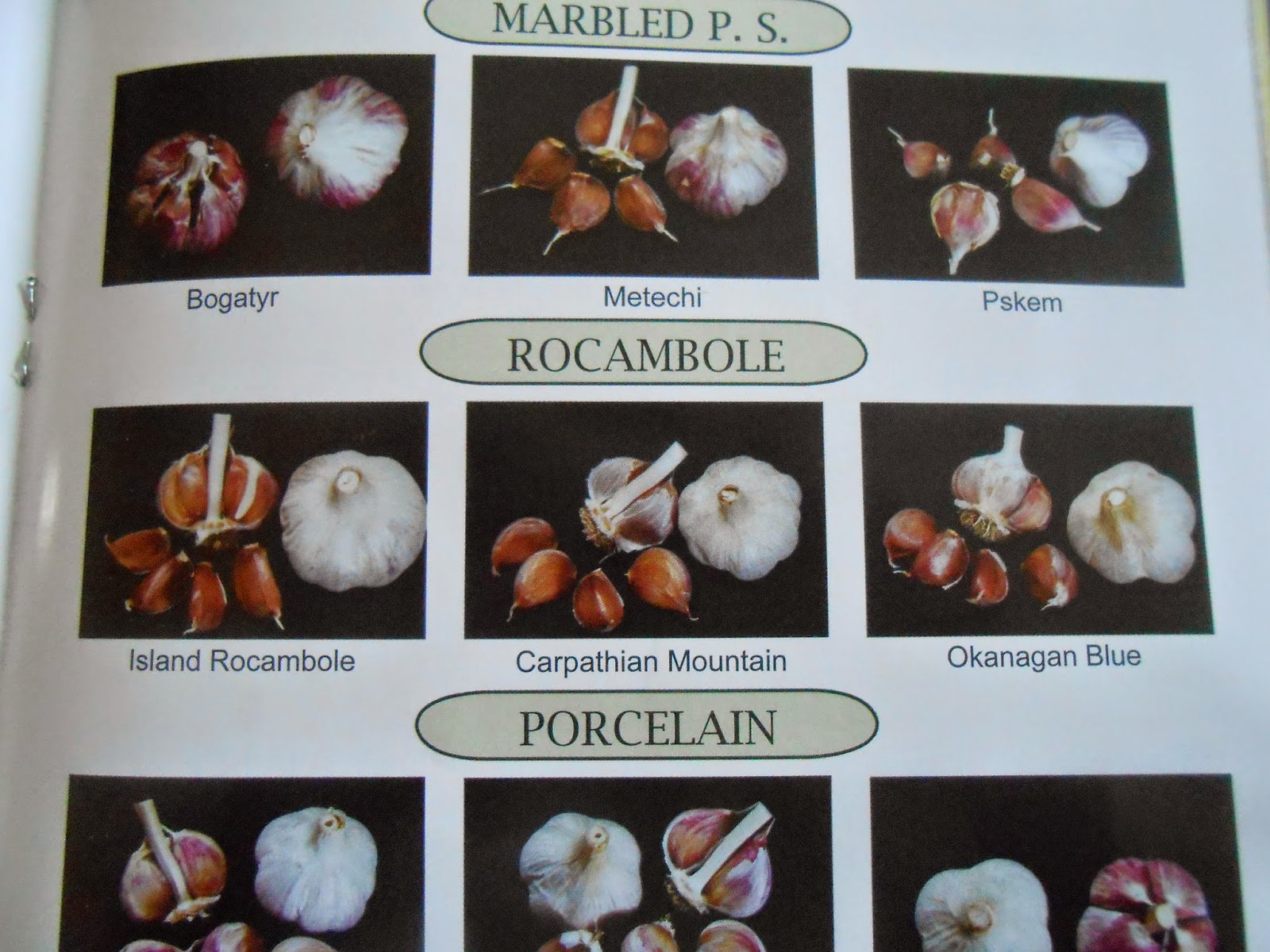 We'll be digging our garlic in June.  We planted and mulched it last October.  Here's what it looks like now. 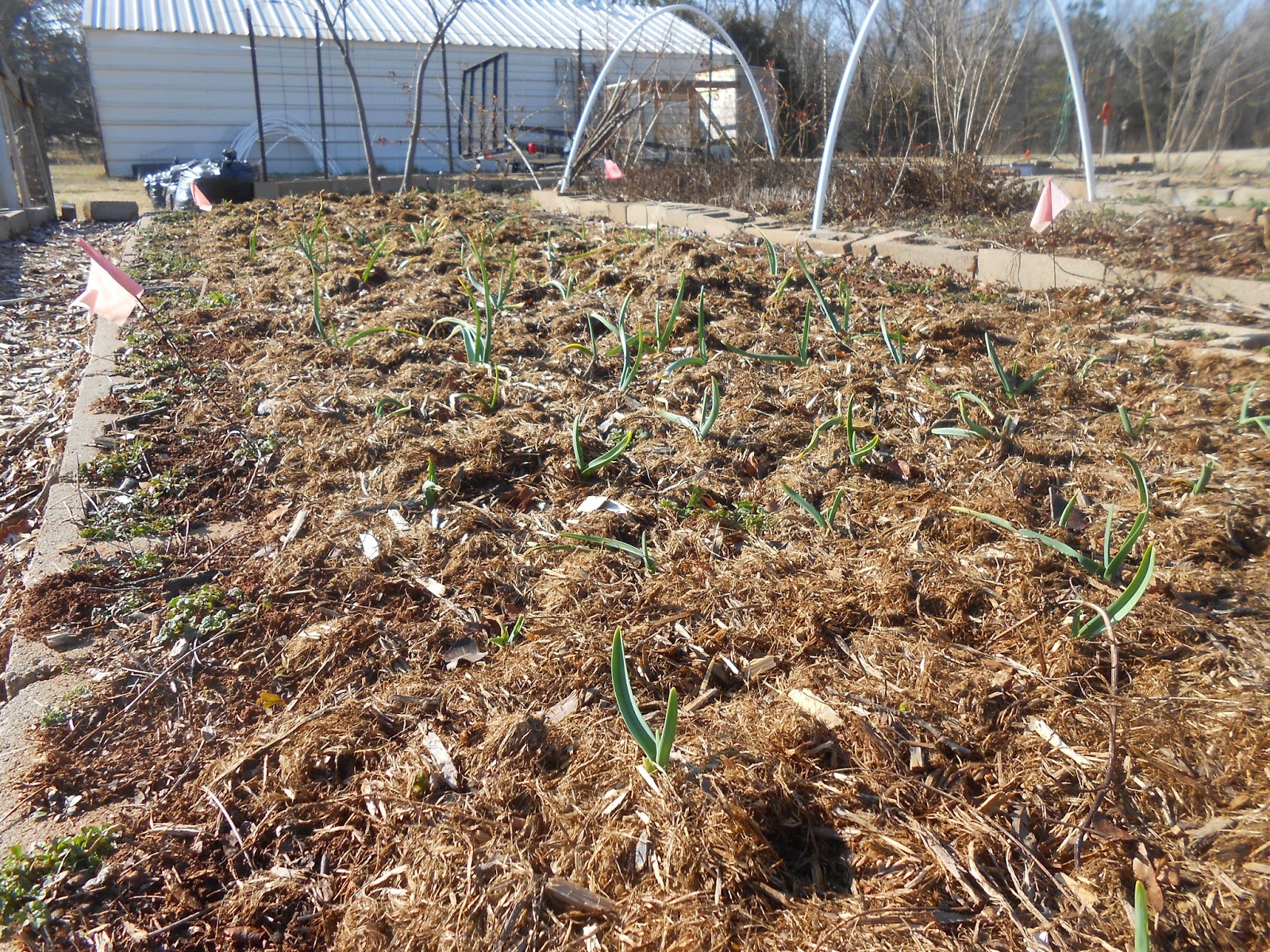 Not much to see, huh?  But, believe me by June it will be a foot tall and have heads as big as a racquetball.

Another fringe benefit that garlic gives us are its "scapes".  Take a look at the drawing on the front of the Filaree catalog above.   Notice the goat's horns.  Those are garlic flower stalks, commonly called scapes.  We cut these off and sell them at the market.  They can be grilled, stir-fried, added to soups, made into pesto, added to hummus .... all kinds of uses for them.

So, visit your local farmers' market this spring.  You should find scapes in May, followed by a wide variety of garlic in June.
Posted by Windy Acres at 1:55 PM No comments: