I love the wildflowers that grow on the areas of the farm we do not mow.  Here is a picture of what one of the areas looks like this spring.  When the sun is shining, there are lots of yellow flowers that are open.  This picture was taken on a cloudy day, so they are not open. 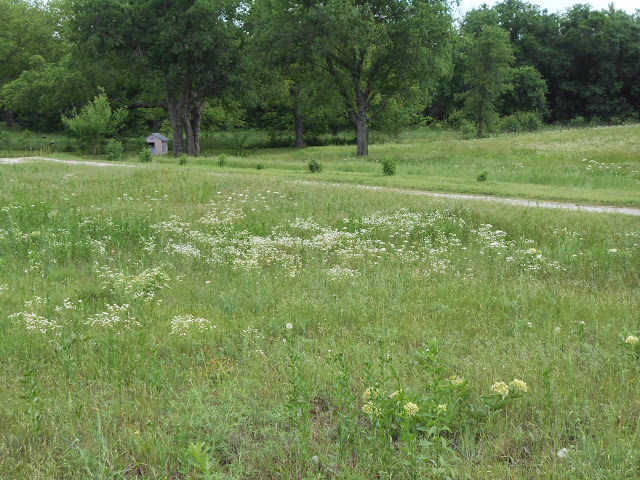 Notice the flowering plant in the lower right corner of the picture.  Here's a closeup of one of the flowers. 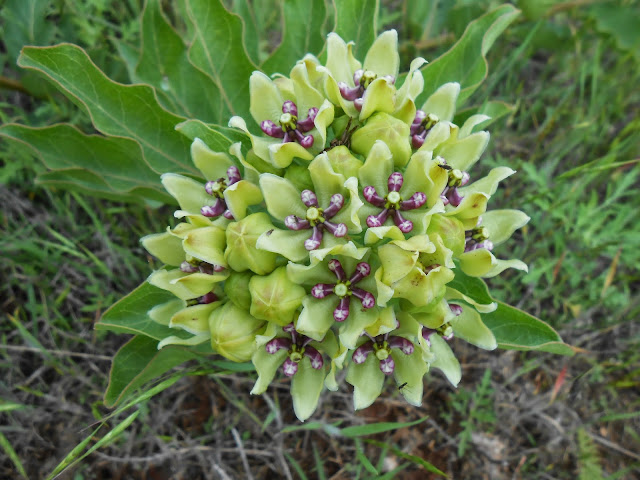 This plant is a variety of milkweed named Antelope Horns.  Milkweed is essential to the life of Monarch butterflies.  The butterfly and the plant evolved together over the centuries. Caterpillars eat only milkweed leaves. Adult monarch butterflies eat nectar from flowers, which consists of about 20% sugar.  The chemicals in milkweed protect the monarch. The chemicals the caterpillar ingests remain in its body, even after metamorphosis, making the adult butterfly toxic and bitter-tasting to many predators.

Monarchs migrate to warmer climes for the winter from their winter homes in South America and Mexico, a round-trip of about 6,000 miles. It takes them up to two months to travel each leg of the journey. Each butterfly only makes the trip once, and then its great-grandchildren make the trip the following year.

However, Monarch populations are declining at an alarming rate. The North American monarch population has declined by 90 percent over the past two decades.  The decline has been linked to a deadly combination of factors that includes illegal logging in Mexico, wildfires, droughts, and loss of their crucial milkweed habitat in the United States.

Milkweed is in drastic decline due to the human battle against weeds led by the increased use of glyphosate-based herbicides.  These are used on genetically modified crops and have been a leading cause of milkweed loss.  In fact, this study points to a 58 percent decline of milkweed in the Midwest and an 81 percent decline in monarchs in the Midwest from 1999 to 2010.  These declines coincide with increased use of these herbicides.


While you and I cannot do anything about illegal logging in Mexico or droughts, we can do something to help increase milkweed populations where ever we live.  One thing is to plant milkweed in our yards and flowerbeds.  There are varieties that are very pretty, such as these shown on the Lady Bird Johnson Wildflower Center website.  We can also encourage Monarch survival by stopping the use of herbicides and pesticides on our lawns and gardens.

Last Saturday at our farmers' market we had a bunch of beautiful lettuce heads for sale in our booth.  As the morning progressed, I began to notice little critters, like this, on the heads of lettuce.  Looks kind of scary at first glance, but you don't want to squash this bug because it is Lady Bug larvae (or Lady Beetle which is the official common name recognized by the Entomological  Association of America).  At this stage of development, the larvae are also called "aphid lions" because they are voracious and can consume their own weight in aphids.  Adult Lady Bugs may consume up to 50 a day. 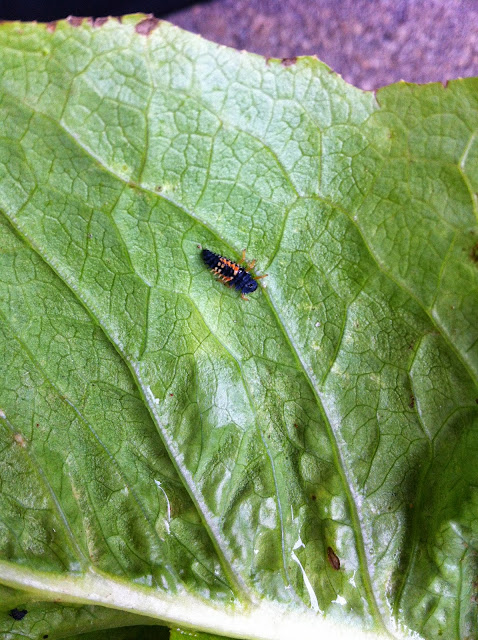 Here is another one of the larvae. After a while, I began to pick them off to take back home to the garden.  I collected some of the lettuce leaves that had fallen off and put them in a plastic pan.  Then, I put the larvae in the pan.  I think we made it home with most of them.  They can't fly at this stage, but they are quite mobile and can crawl pretty quickly. 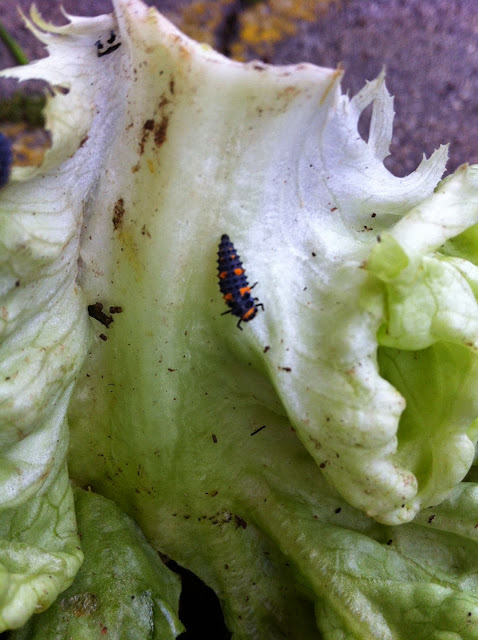 After 20-30 days, the larvae pupate, then emerge as adults in another 3-12 days, depending on temperatures and species. Adults may live only a few months to more than one year. Here's one of the adult Lady Bugs that was on the lettuce. 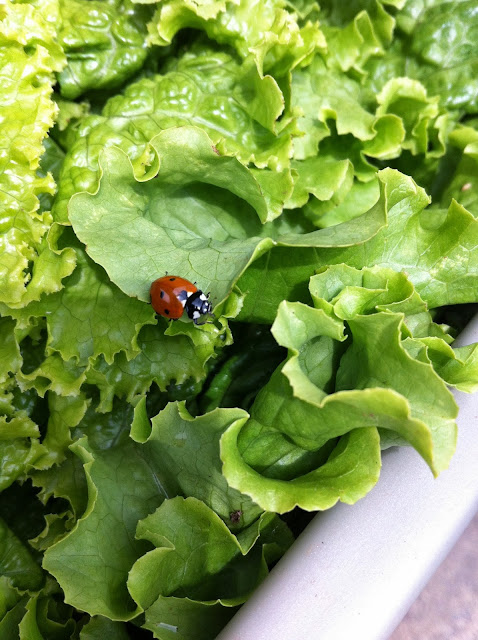 Every fall, Tom plants cover crops on our fields.  I wrote about the cover crops we planted back in 2011.

Normally, the cover crops include some sort of legume.  Legumes are plants that bear their seeds in pods. They are different from non-legume crops, such as tomatoes, squash, etc.  because much of the nitrogen they require is produced through fixation of atmospheric nitrogen by bacteria in nodules on their roots.  Common legumes you are probably familiar with are crops such as beans, lentils and peas.

Last fall, I decided to plant Austrian Winter Peas in one of my raised beds.  I didn't get them planted until late in the fall and I was surprised they even sprouted before cold weather arrived.  They were small most of the winter, but as the weather warmed this spring they grew to be about a foot tall.  A couple of weeks ago, Tom tilled them under so they could decompose and enrich the soil before we planted tomatoes in that bed.

I rescued this one.  It's sort of sad looking because I didn't get to it for several days after he tilled. 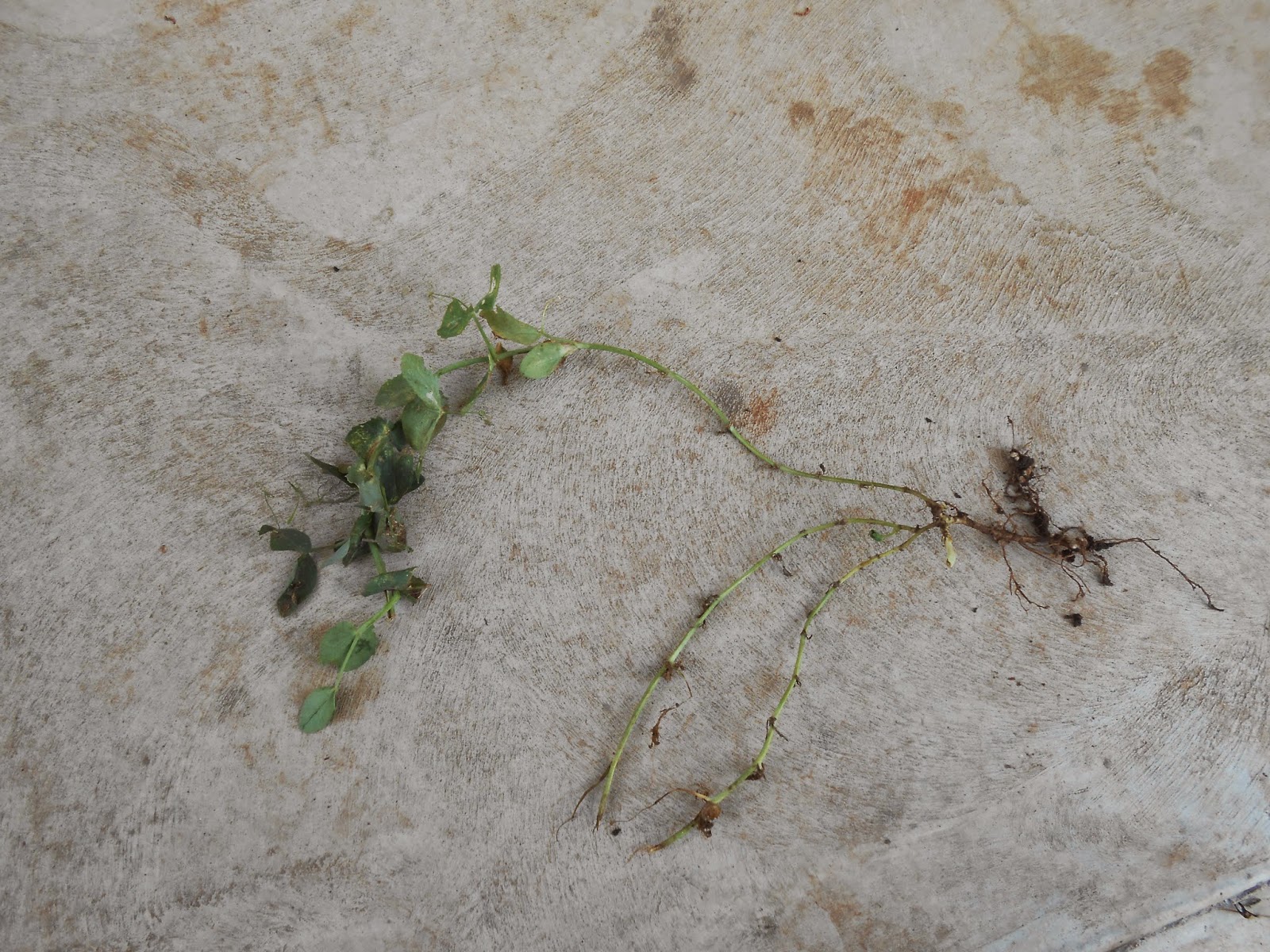 If you look closely, you will see little nodules on the roots that contain the nitrogen-fixing bacteria referred to above.   These, along with the plant itself, are what add nitrogen to the soil when the plant is turned under. 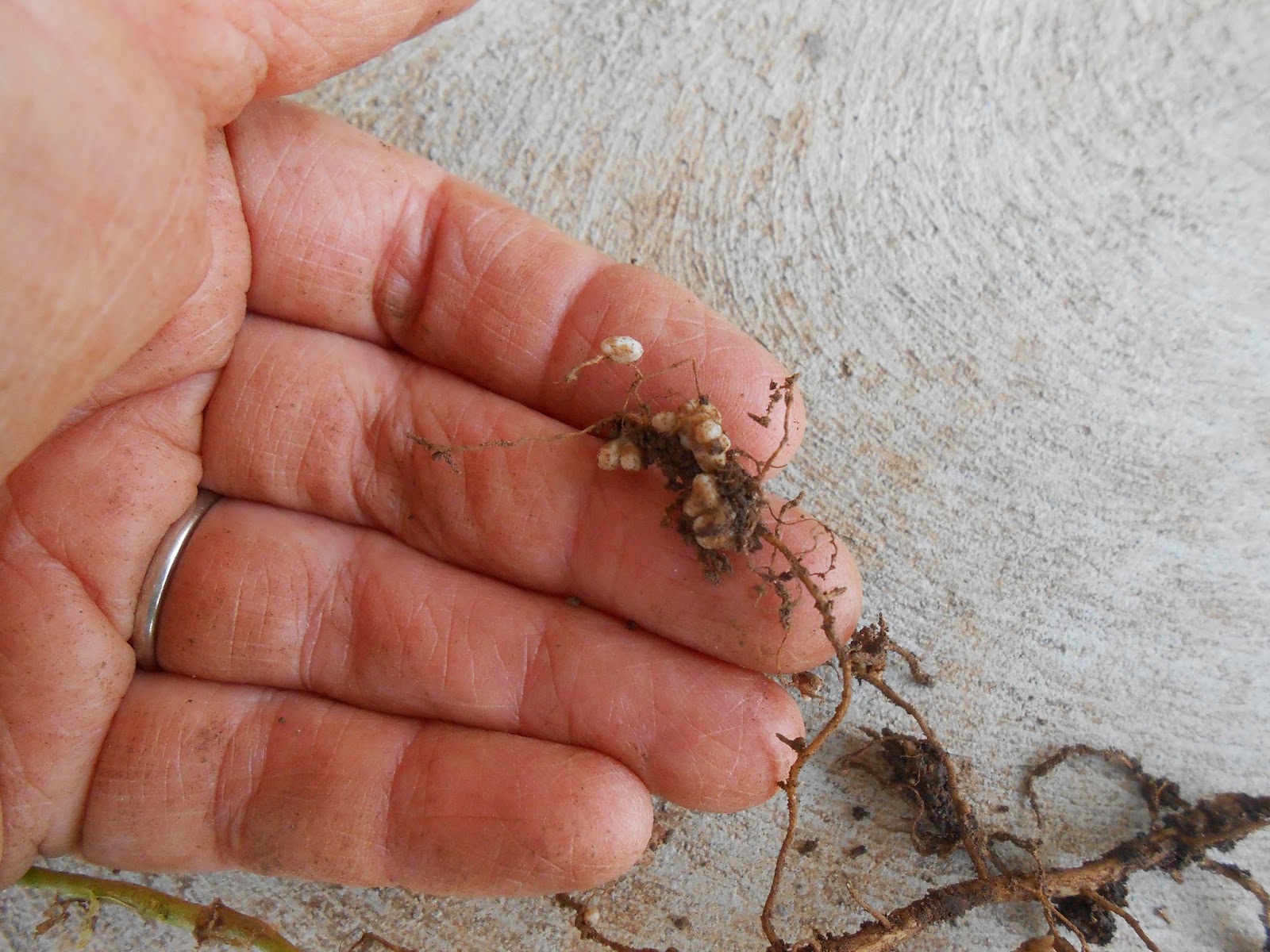 Using nitrogen-fixing cover crops, along with compost, is one of the ways we enrich our soil without using chemical fertilizers.
Posted by Windy Acres at 3:55 PM No comments: