We've had spring-like weather the last few days.  Heck, yesterday it was 80 degrees!  That is verging on summer as far as I am concerned.  I had to break out my sleeveless t-shirt and shorts!  Well, maybe not the shorts just yet.  But, it was a beautiful day and we got a lot done outside.  We planted the elderberry bushes that we bought a couple of weeks ago from 360 Farms near Webbers Falls, OK. 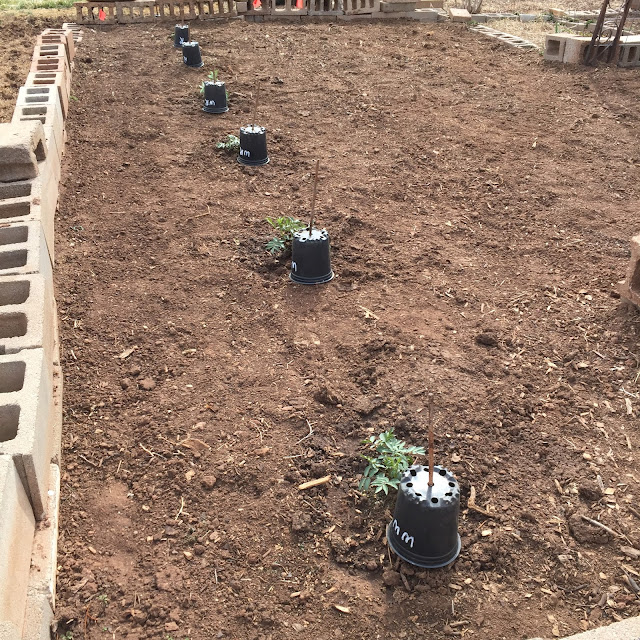 Elderberries are native to Oklahoma and are high in antioxidants.  They make excellent jellies and their flowers can be dried and used for tea.

I also mulched our blackberry bushes using leaves we had collected last fall.  This normally eliminates most of the weeds in the blackberry bed and keeps moisture in the soil. 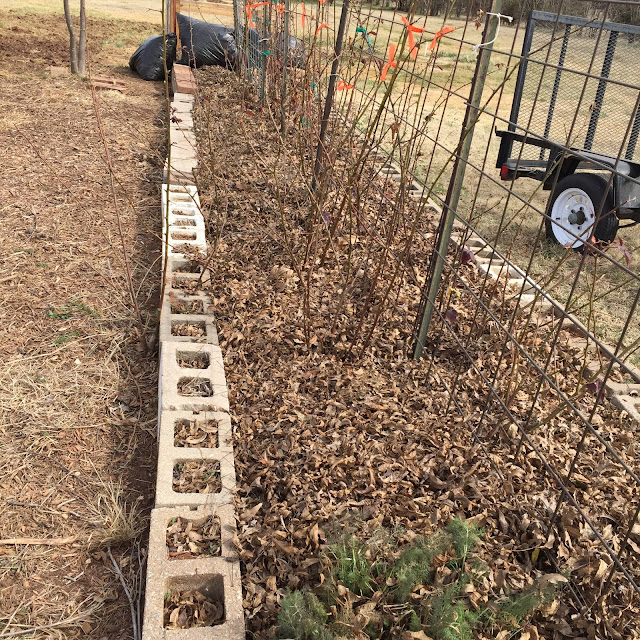 Finally, we rebuilt our household compost pile.  This time we just used t-posts and wire.  Tom used part of a pallet as a "gate".  It is just wired to a couple of the posts and will be easy to remove when we are ready to move the contents of the pile out to our large-scale compost making effort out in the "compost lot".  See this entry for information on that:  Making Compost . 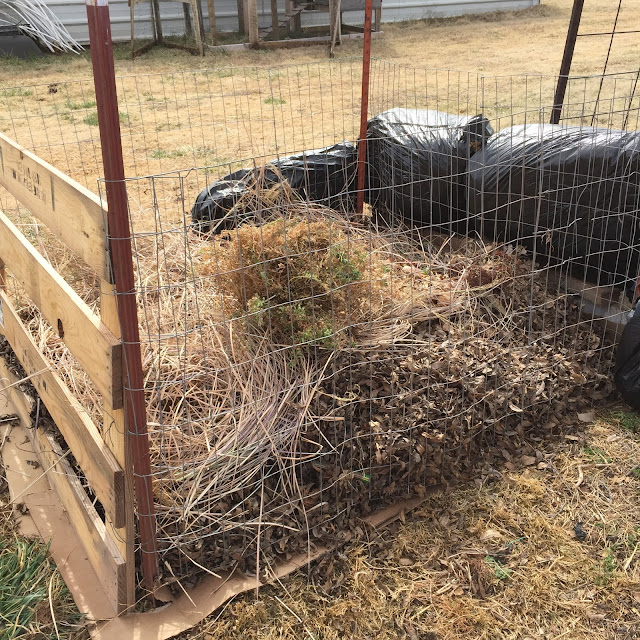 Rebuilding this compost pile was necessitated because Tom hit the old one with the tractor.   It was a more elaborate affair that consisted of wooden frames covered with wire.  It was getting in need of repair anyway.  The new one will work just as well and only took a fraction of the time to build. 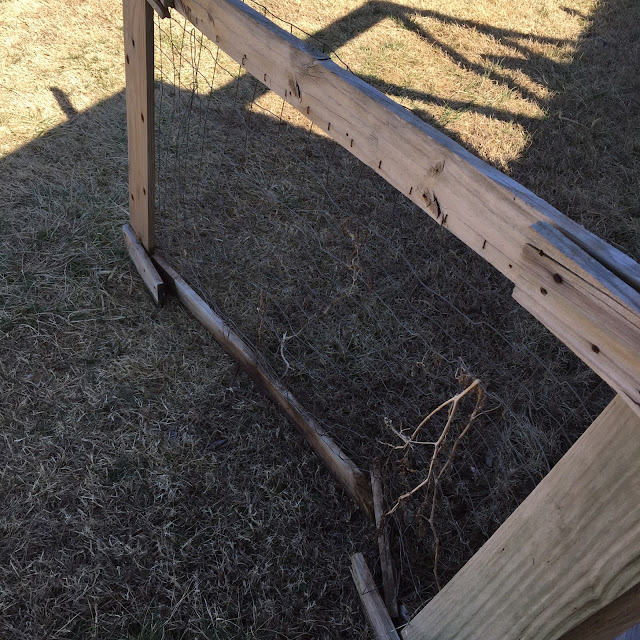 While I was out in the garden, I took the opportunity to take pictures of signs of life that are sprouting up.  Here's a picture of one of the garlic beds. 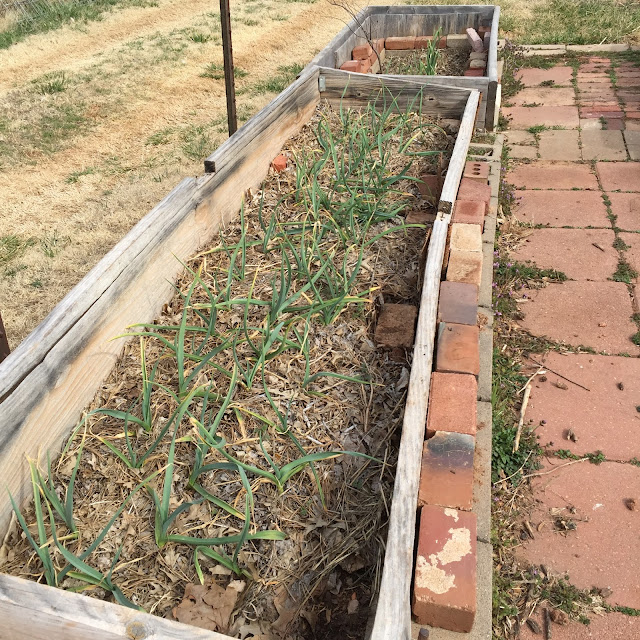 I also noticed that my chives are coming out of dormancy. 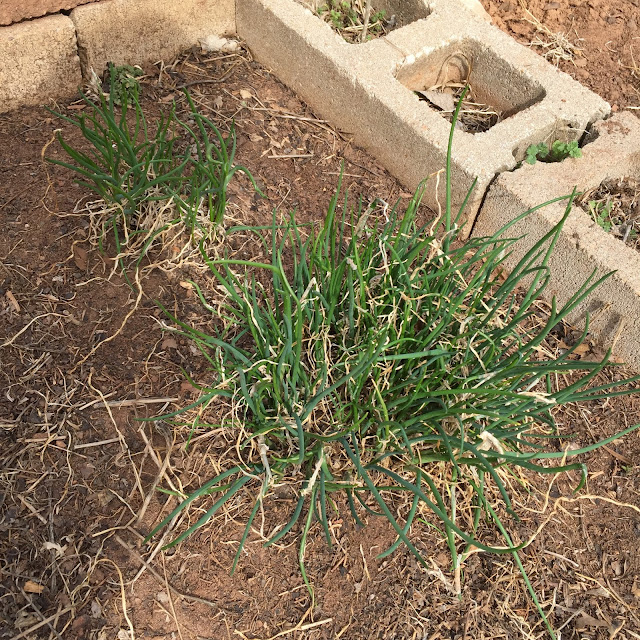 We've been growing lettuce in our hoophouse all winter.  But, Tom has begun planting it outside in the garden now.  Here are some tiny lettuce plants he set out yesterday.  We will cover these with a light row-cover if it gets really cold, but otherwise, they will be fine and ready to pick in a few weeks. 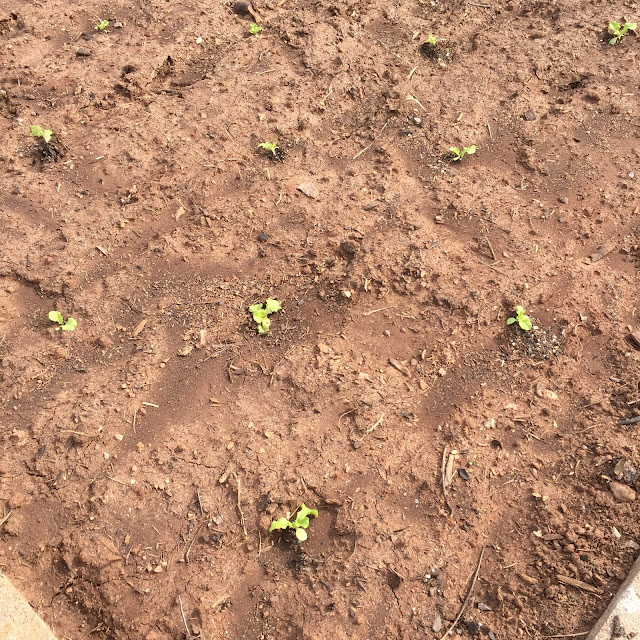 There were other signs of life in the garden, as well.  Like this dandelion. 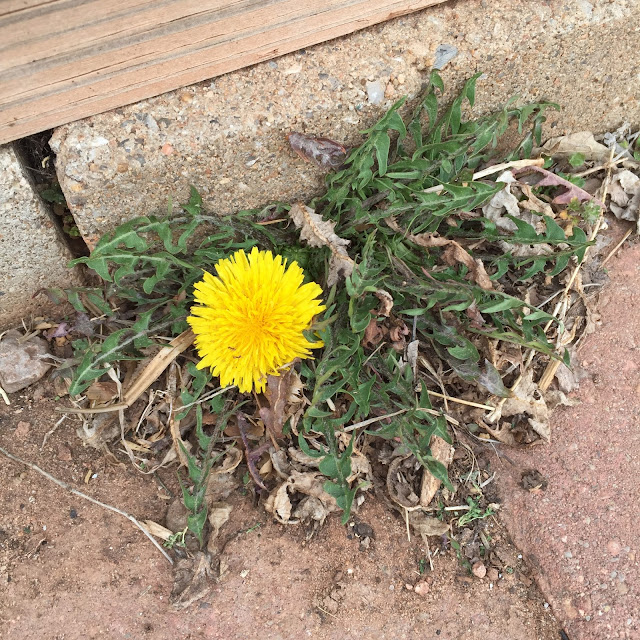 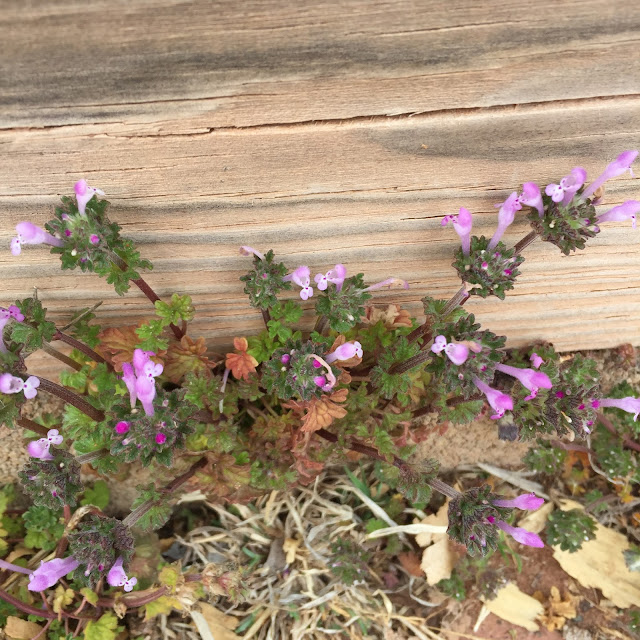 Even if dandelion and henbit are considered weeds, to me they are still beautiful flowers and are a welcome sight after the cold, overcast days of winter.
Posted by Windy Acres at 3:15 PM No comments:

I have found a new interest ..... Winter Sowing!  I know this sounds crazy, but I ran across this on Facebook and it has opened up a whole new world for me.  The rationale behind this concept is that in the natural world plants grow from seed, bloom, make seed and die.  The seed lie on the ground through the winter, through rain, sleet, snow and freezing weather.  Then, when the time is right, they sprout, send down roots and the whole cycle begins again.

It is thought that seeds which follow this cycle and are outside to endure the cool evenings and warm days during the early spring form stronger plants than those that are coddled inside under lights and warm temperatures.   This makes a lot of sense to me.  In fact, there is a website devoted to the concept which gives suggestions and ideas about how to do this.

It appears one of the most prevalent ways to accomplish winter sowing is to use gallon milk jugs.  I started saving milk jugs weeks ago, but when I was ready to start my seeds, I didn't have enough, so I went to a couple of the local coffee shops and asked for their empties.  Aspen Coffee gave me a whole trash bag full of empty gallon milk jugs!

The first step was to rinse them out and cut them around the middle with an X-acto knife, leaving a small "hinge" at the bottom of the handle. 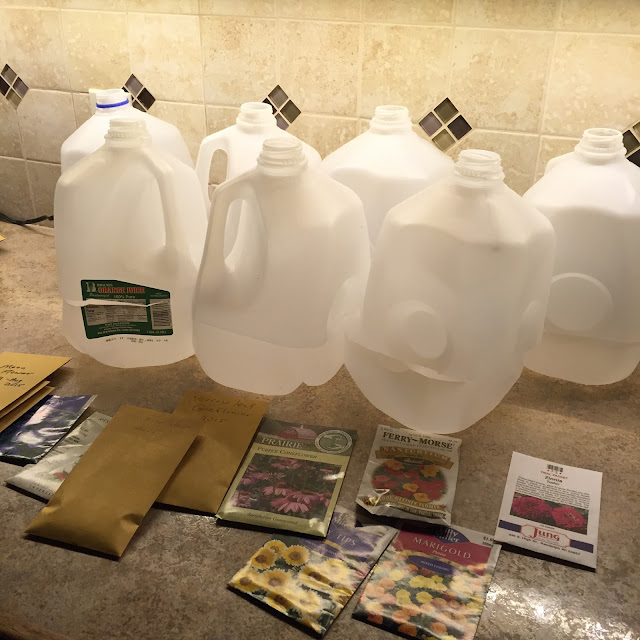 Here is a closer look at the hinge. 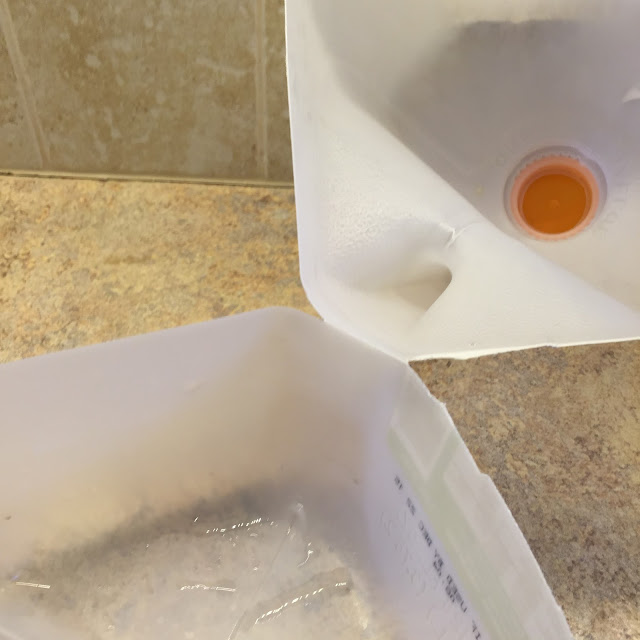 Then make drainage holes in the bottom.  There are several ways to make the holes.  One is to heat a nail over the stove and melt a hole in the plastic.  However, I used a Dremel tool fitted with a small drill bit. 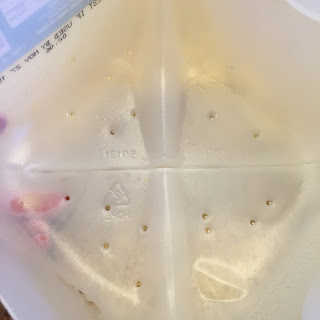 Once the holes are made, then it is time to fill them with potting soil.  Be sure to water the soil well before you plant the seeds. 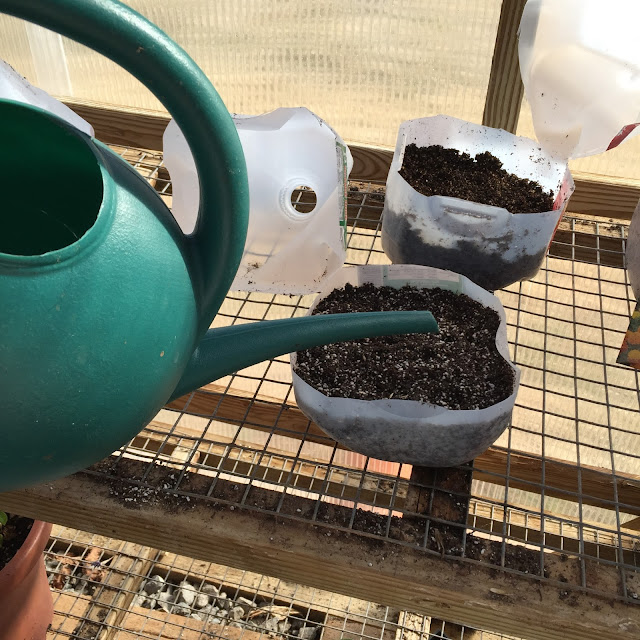 Now sprinkle seeds on top of the soil and cover them with a small amount of soil. 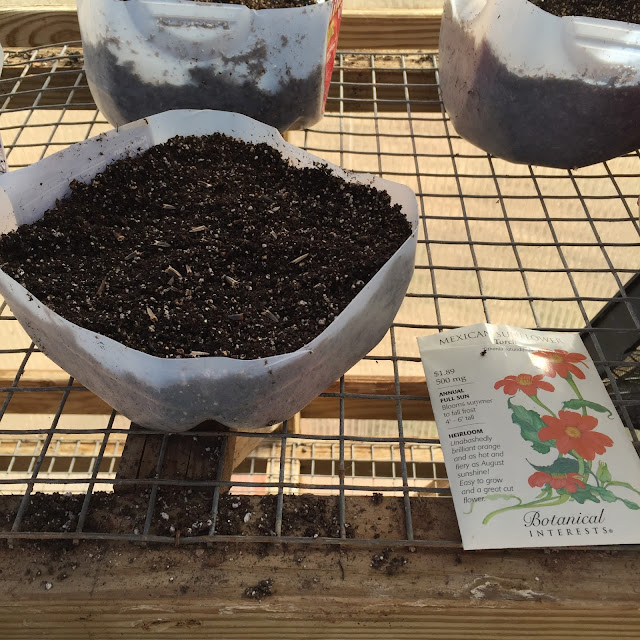 After the seeds are planted, close the jug and seal it with duct tape, like this. 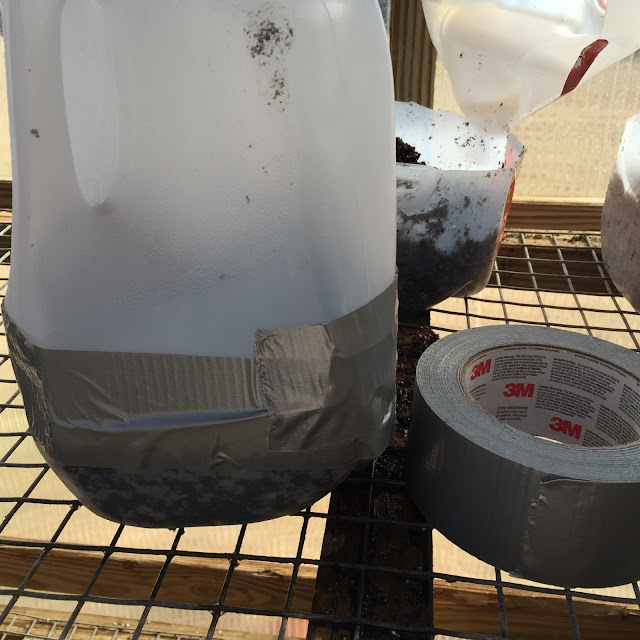 Label the jugs with a felt-tip marker and set them in a sheltered place where they will get some of the winter sun. 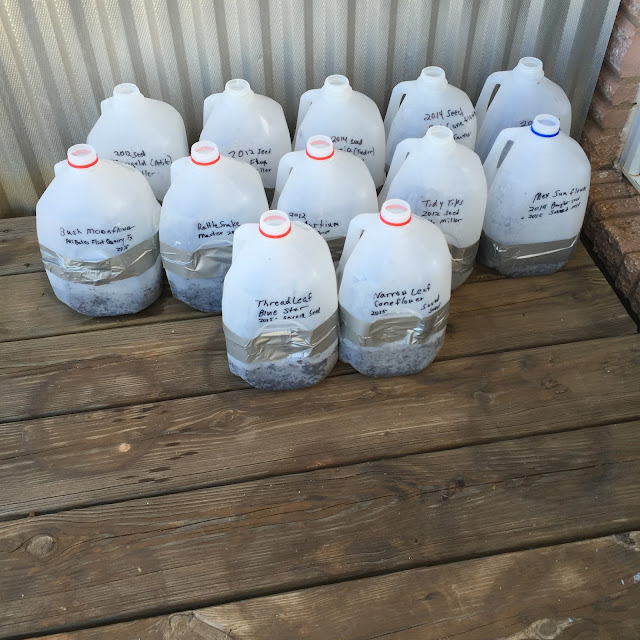 The general rule of thumb seems to be that you can use the winter sowing method to start perennials in January, but should wait until mid-February or early March to start tender plants.  I didn't know this at the time and planted all mine in mid-January.  Even so, I have one annual that has come up already and seems to be doing fine, even though most nights have been below freezing.

Once the plants are up, you will have to keep a close eye on the jugs to make sure they don't dry out.   Also, when the days are consistently warm and sunny, you will need to open the jugs up to keep the little plants from cooking.   There will be a period of several weeks where you may need to open them during the day and close them again on frosty nights.  You should not have to re-tape them, but just use a short piece of tape to close the jugs for the night.

After thoughts.....  In retrospect, I believe I cut some of my jugs too shallow.  They need to be deep enough to put 2-3 inches of soil in.  Also, I ran into problems taping the jugs shut because of the indention that many jugs have in the side. 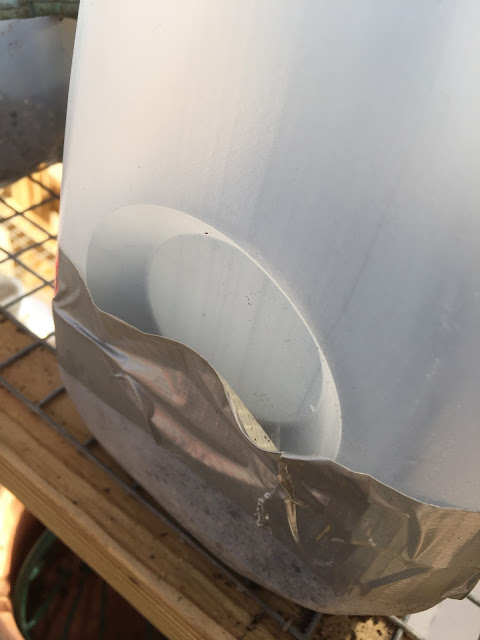 A solution to both of these issues is to cut the jugs at the top, like this. 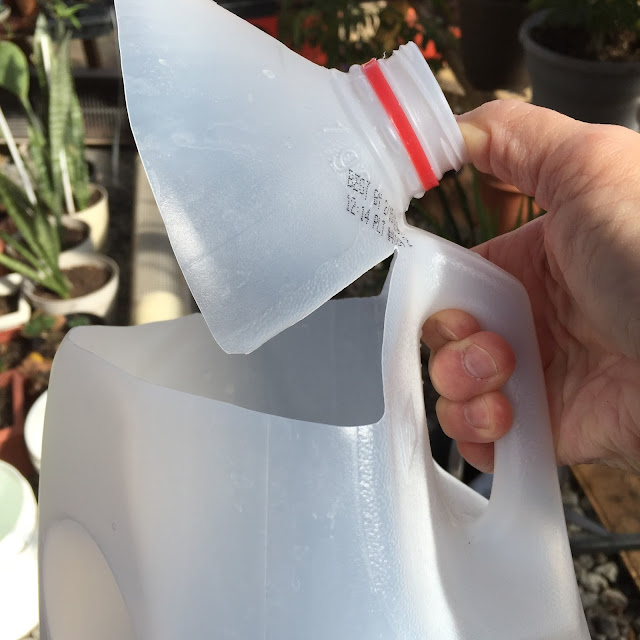 When cut this way, the jug is deep enough so you can put in as much soil as you like and it also avoids the problem with taping over the indentation in the side.  It also uses less duct tape.

It will be interesting to see how this works.  Judging from the one jug of annuals that are already up, I know I put too many seeds in the jugs.  I'm sure I will have to thin the plants and only keep the number I need.

It is still not too late to give this a try.  All the seeds I have planted so far are flowers of various sorts, perennial and annual.  But, I want to try starting a few tomatoes and peppers with this method and compare them with the ones we normally start in the basement under lights.

My biggest problem is going to be where to plant all these flowers, if they all come up!
Posted by Windy Acres at 2:13 PM 2 comments: