Day two of our organic farm tour began with a visit to Provision Organic Farm in Oklahoma City.  The farm provides organic vegetables and meat for Provision Kitchen.  Both are locally and family-owned.  Here we are at the beginning of the tour with one of the farm managers. 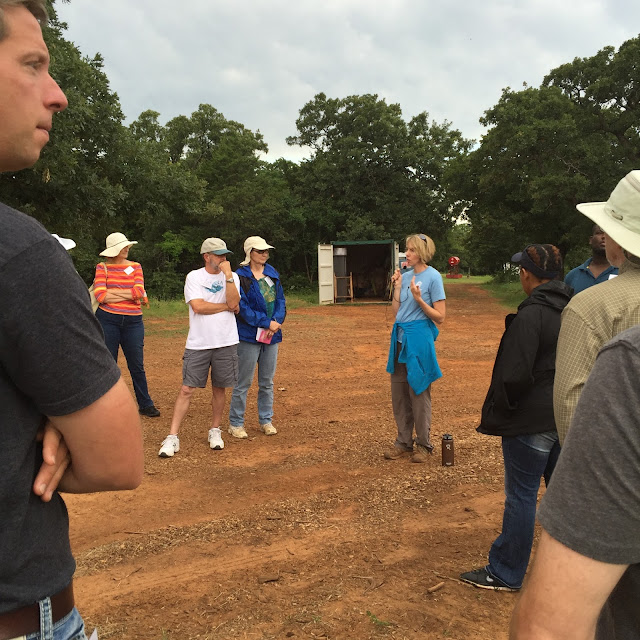 Just like Three Springs Farm (from the blog on Day 1), they have a large hoophouse full of tomatoes. 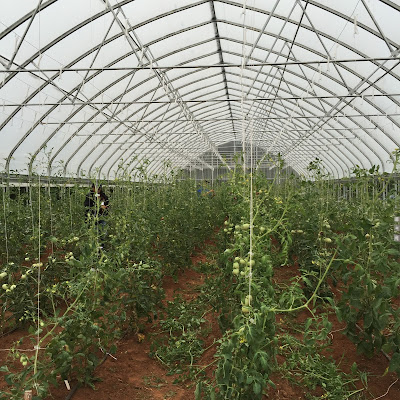 The tomatoes are trained up twine that is attached to overhead supports. 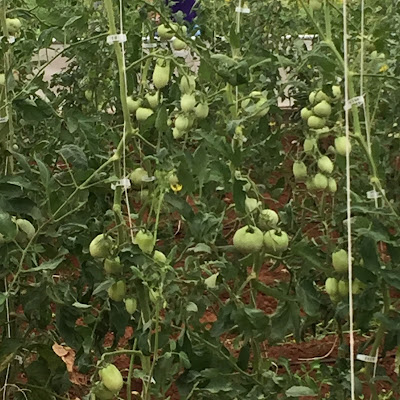 They are in the process of building a large barn that will serve several purposes. 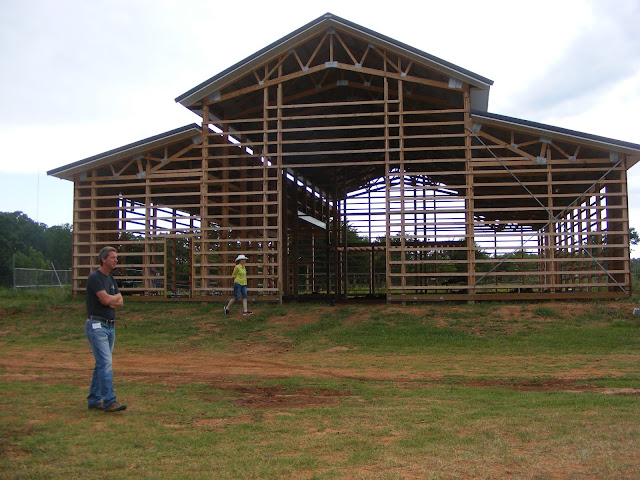 In addition to vegetables, they also raise "pastured" chickens and hogs.  This means their animals will never see the inside of a Confined Animal Feeding Operation (CAFO) a.k.a. Pollution Palace.  Believe me, you do not want to eat an egg or any meat that comes from one of those places.

Here is their chicken "tractor".  It can be moved around to give the chickens access to fresh grass. 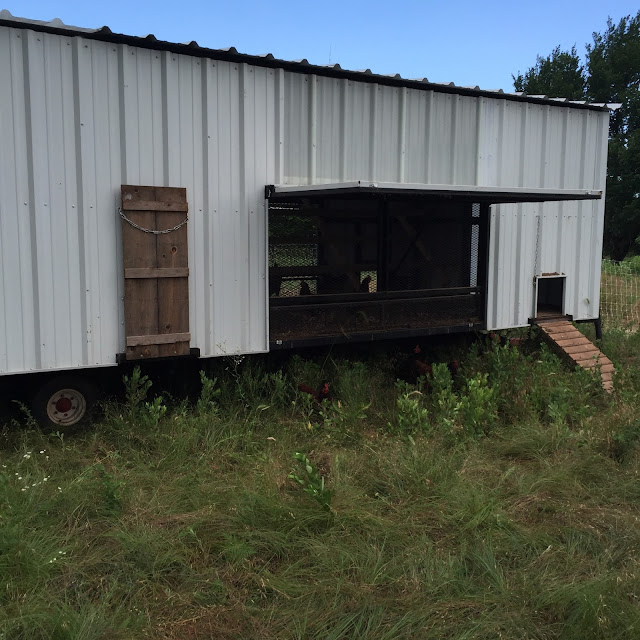 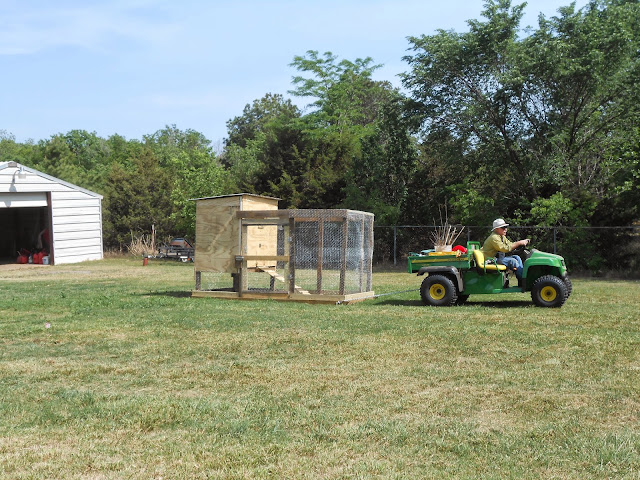 They have Rhode Island Red chickens. 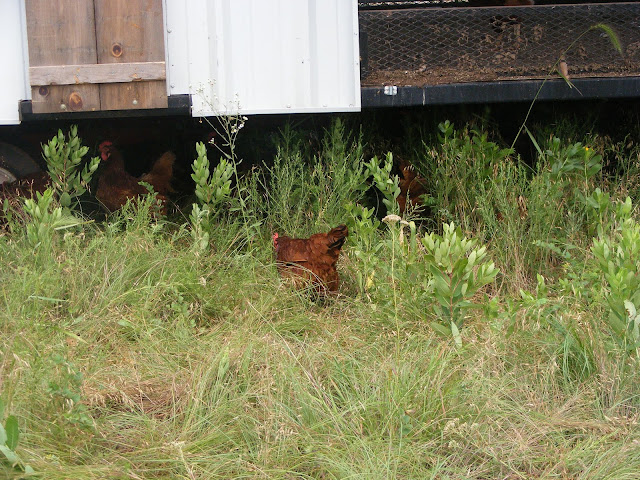 And, they raise Berkshire Tamworth hogs.  Although you cannot see it, the hogs are fenced in with electric fencing that can easily be moved to allow them access to new pasture and "rooting" ground. 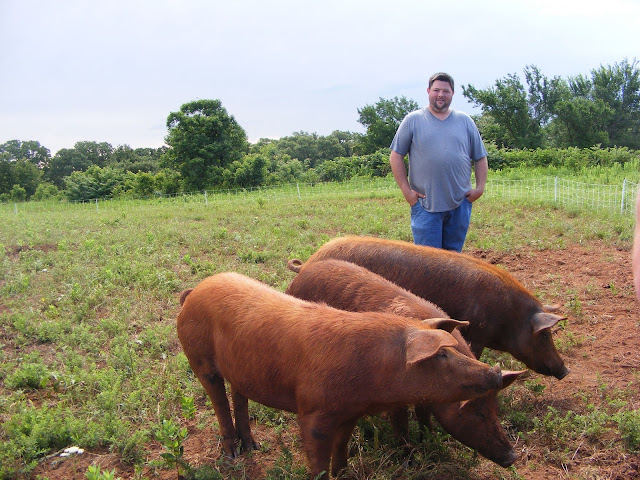 Here's a closeup of one of the hogs.  I was standing just on the other side of the electric fence. 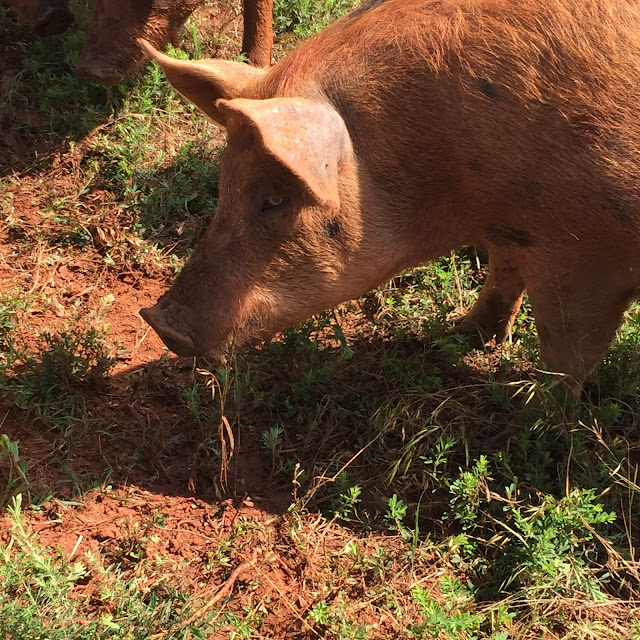 Next up on our agenda was a visit to Guilford Gardens  which is located in northwest Oklahoma City.  It is comprised of four city lots, smack dab in the middle of a suburban neighborhood.  However, you would never know it was there.  The garden is behind the the family home and well hidden by privacy fences and shrubbery.   Here's our tour bus parked in the driveway. 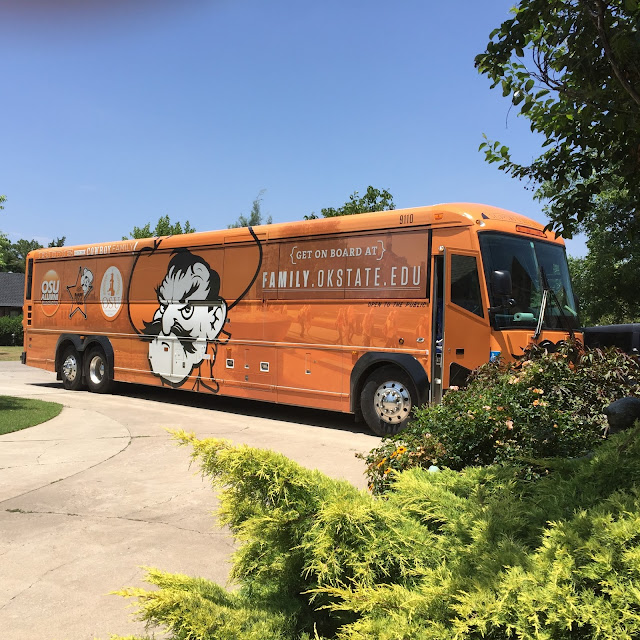 A flower garden occupies one of the four lots.  It is a commercial venture between Guilford Gardens and Elia Woods of CommonWealth Urban Farms.   Here are some of the flowers that are grown there. 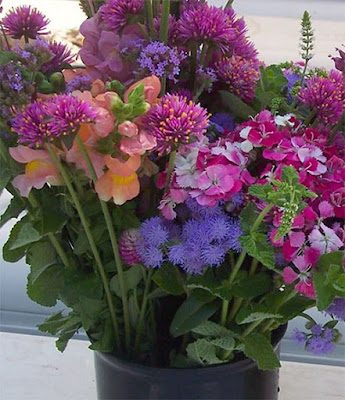 The Guilford Gardens is owned by Kamala Gamble and supplies produce to her other business Kam's Kookery, as well as to their CSA members.   Kam does catering and treated us to a terrific lunch before we toured her gardens.

Next, we loaded back on the bus for the trip to Ft. Cobb, OK, and a visit to Arcadian Family Farm.  This farm is owned by Rod Ardoin and Nanette Ardoin.  They are originally from Louisiana.  Ron is the second person from the left, in the rubber boots.  I really enjoyed him.  He has a slight southern Louisiana accent and made a point of singling out a couple of OSU professors, who were on the tour with us by asking questions of them.  He'd say things like "Maybe one of the doctors could tell us .....".  I got the feeling that he might actually know more about the subject than the "doctors" did.  Ha! 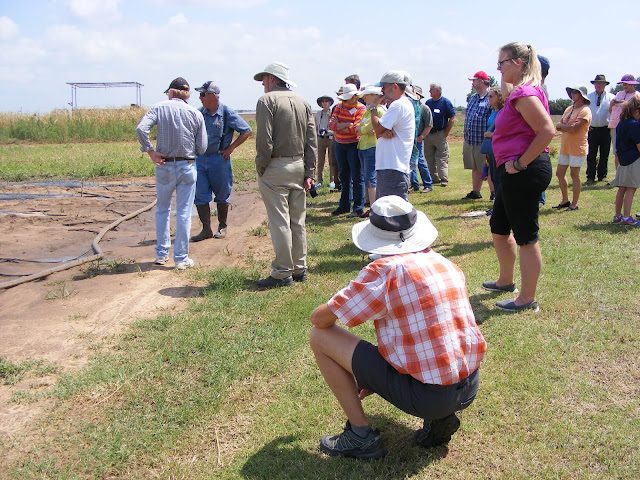 They've had a lot of rain in this area recently and there were puddles around.  I think Ron had the right idea with his rubber boots. 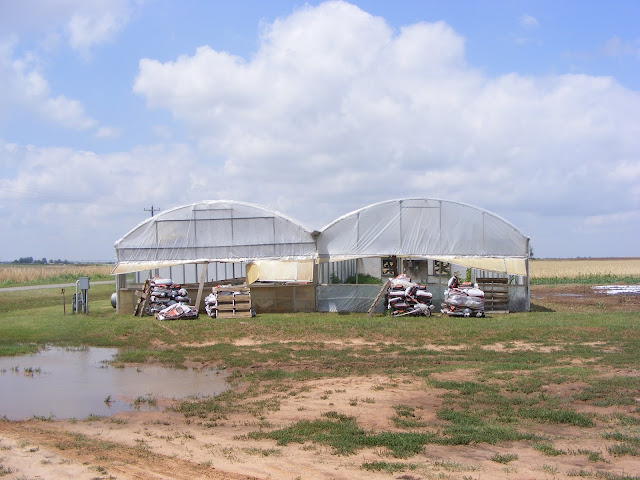 Ft. Cobb is located in southwest Oklahoma.  As you can see there are wide-open spaces all around.  One of the crops this organic farm is known for is their sweet potatoes shown below.  Who better to grow sweet potatoes than someone from southern Louisiana! 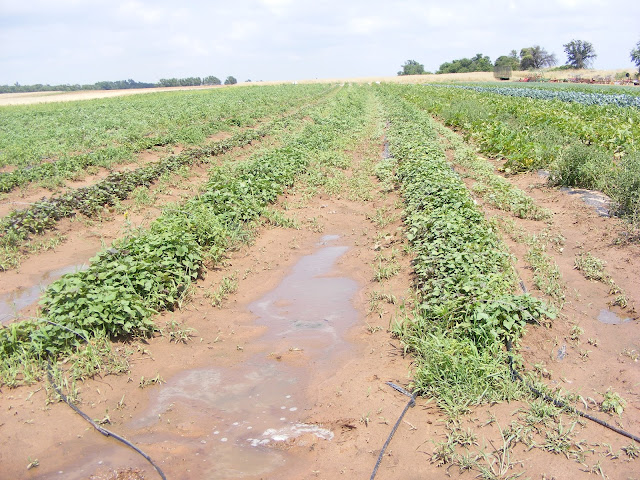 The black tubing running to the rows is part of their drip-irrigation system. The tubing contains small holes that allow the water to drip slowly right at the base of the plants.  This is so much better at conserving water than the large sprinkler systems that so many farmers use.  The picture below shows how the smaller tubes are connected to the main water line. The picture also shows how black plastic is used to control weeds in the field.  These are onions.  Small holes are punched in the plastic and the onions plants are planted in the holes. 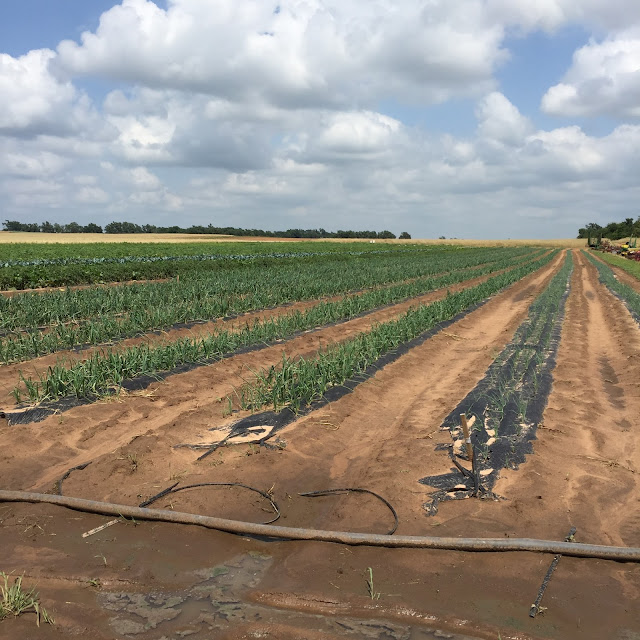 Arcadian Family Farm was the last stop on our 2-day organic farm tour.  By the time we got home that evening, we were tuckered out, but extremely excited by the organic movement in our state.

Posted by Windy Acres at 5:17 PM No comments:

We've just spent the last two days touring various organic farms around the state.  As I write this, I am overwhelmed with the movement toward sustainability and organic garden management in our state.  I am also in awe of the people who are leading this movement and what they are doing, in many cases with very little resources.

I can't possibly cram both days into one blog post, so I will break it up into Day 1 and Day 2. Several organizations went together to organize and support the tour.   I first heard about it through the Kerr Center for Sustainable Agriculture.  Here's the flier they put up on their web site.  Kerr Center Announcement
The first day we drove to eastern Oklahoma to Three Springs Farm.  Three Springs Farm
Mike and Emily own and run the farm.  Here is Emily talking to us about the farm.  The little girl is their daughter.  It was wonderful to see a child who spends her days outside running free, instead of indoors in front of the TV or playing a video game.  But, I digress .... 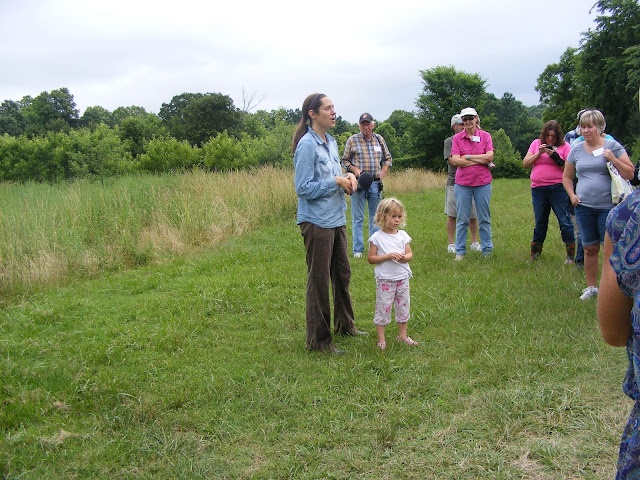 Mike and Emily do all the work themselves and run a CSA (Community Supported Agriculture) where members "buy" a share in the farm by paying an annual fee.  In return, the members are entitled to a bag of produce each week of whatever is in season.  Members pick their bags up each week at the Cherry Street Farmers Market in Tulsa where Mike and Emily also sell their produce to non-CSA members. They are a hard-working young couple who are devoted to what they do.

Here are some pictures of their farm.

Posted by Windy Acres at 3:49 PM No comments:

This blog entry is very short.  It's purpose is to give you a link to a video of our composting efforts that was shot by Ever Change Productions .  The video is part of a documentary on sustainability and opportunities to reduce, reuse and recycle waste here in Stillwater.

Ever Change Productions rode with us on our weekly trip to pick up compost ingredients  from a fabulous little restaurant named Good Little Eater. These consist of vegetable peelings, egg shells, and so forth.  They are added to our compost pile which is then turned with a tractor.

Sigh!  So much to do.  So little time.  That's the story of our lives at this time of year.  The summer gardening season is in full swing.  Tom is busy from daylight to dark and, while I don't do a lot of the hard, labor-intensive work, there is always something to do.  As a result, I don't have a lot of time to spend on this blog.

I tend to take pictures with my phone as I go about my daily chores.  Then, at some point, I load them on my computer and ask myself, "Is there a blog in these somewhere?".

Today, as I was looking at the pictures I've taken, I realized there are lots of pictures of bees working over the flowers around the farm.  So, that's what you are going to see today!  Bees, bees and more bees.

I became enamored with the bees earlier this spring when the beekeeper came out and captured a swarm of bees from one of the hives.  I wrote about that in this blog entry:
Bee Swarm .  Since then, I have taken a new interest in the bees and how they work together for the betterment of the entire hive.

Here is a bee on a kale plant that has begun to flower.  Normally, I would have pulled the kale up at this stage, but after seeing how much the bees liked it, I have left it for them. 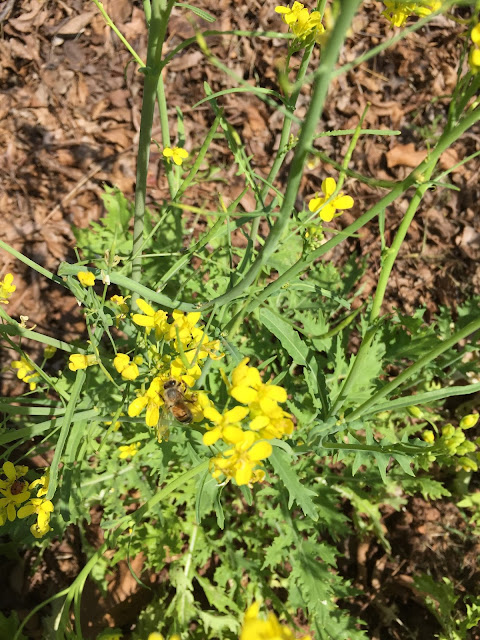 And here's one on a blackberry flower.  I believe we are going to have a bumper crop of blackberries this year, partly due to the pollination the bees are providing. 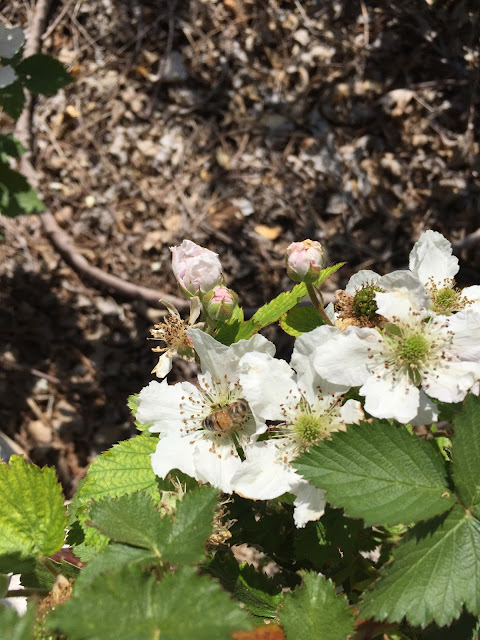 We also have this beautiful Golden Rain Tree in our front yard. 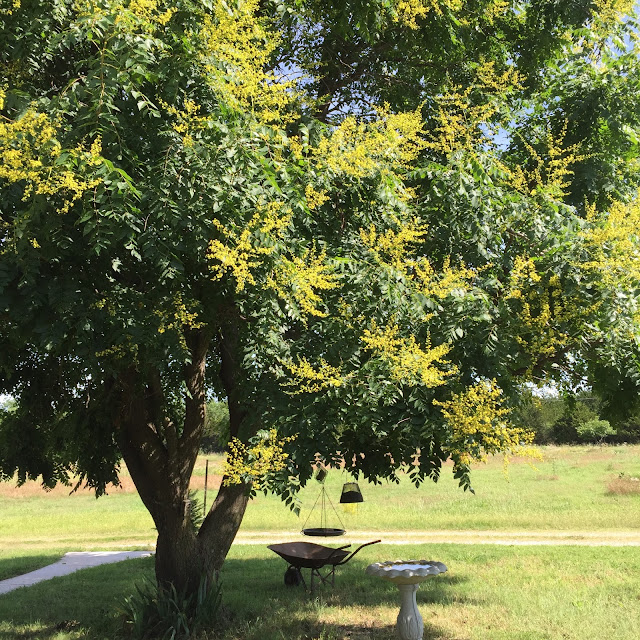 The bees love the flowers. 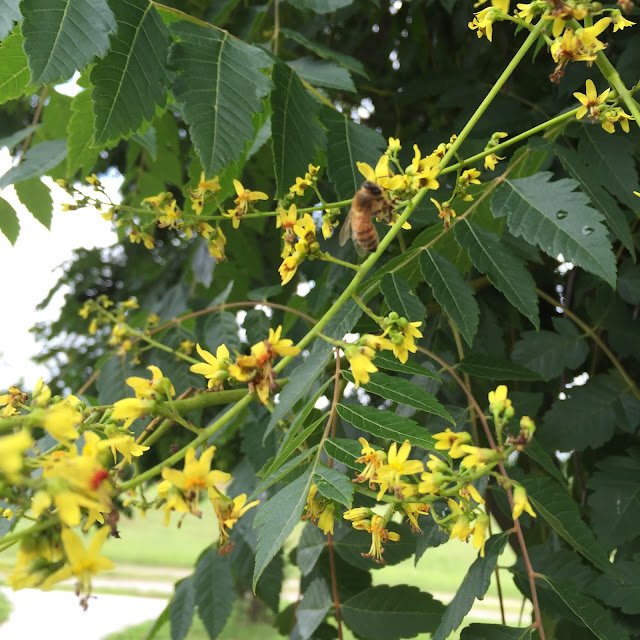 They like the catmint planted in our front flower bed, too.  The catmint is in the lower right of the picture below.  There is some planted up the steps and in front of our porch, as well. 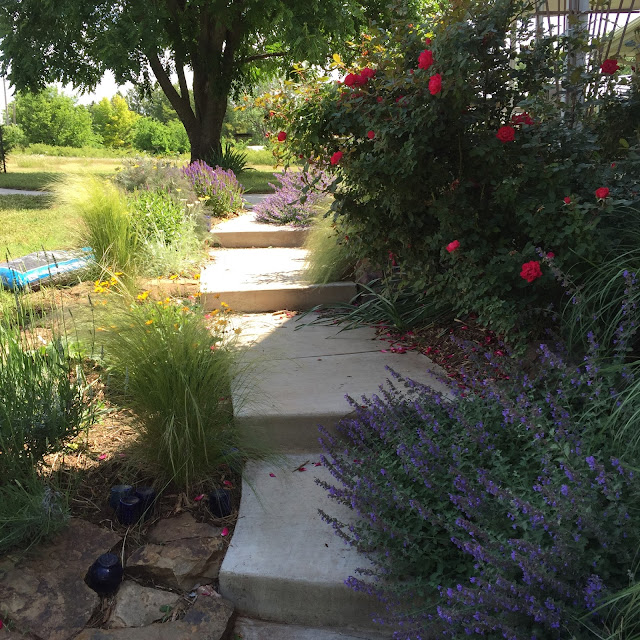 Here's a closeup of a bee working over the catmint. 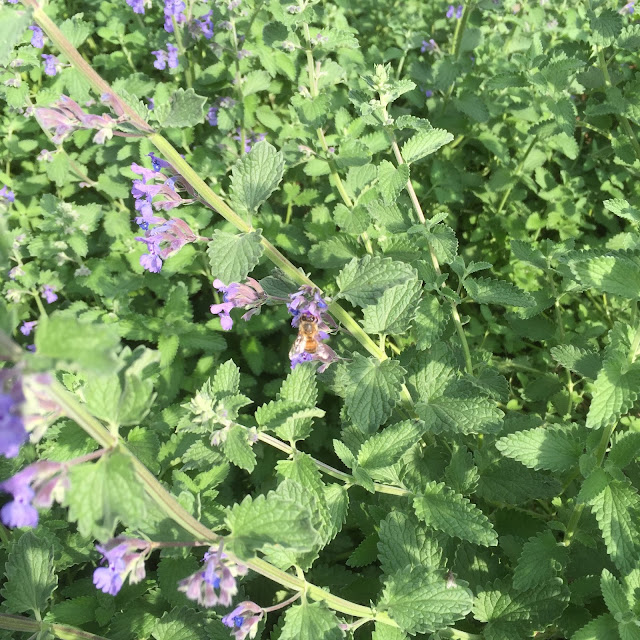 I enjoy drinking coffee on the front porch in the mornings.  Needless to say, the audible hum coming from all the bees serves as nice background music as I savor the quiet coolness of the morning.

One of the early spring flowers that blooms in my flower bed is Thread-leaf Blue Star.  Here it is when it was blooming. 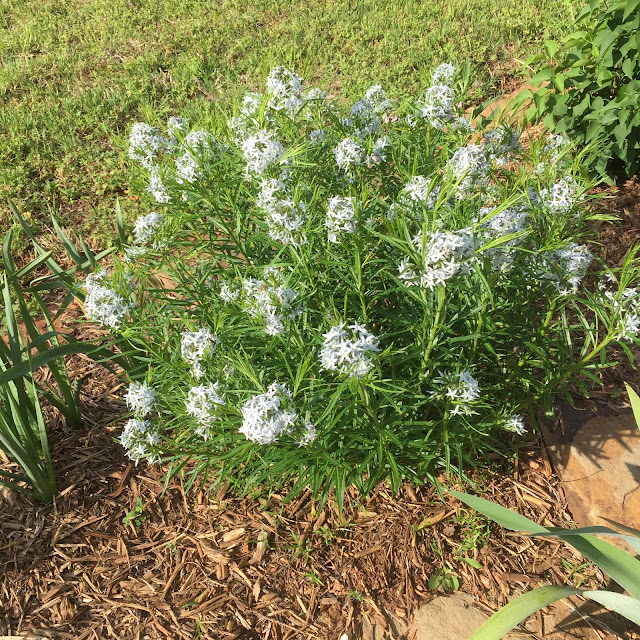 This plant provided a valuable source of food for the bees early in the spring when little else was available to them. 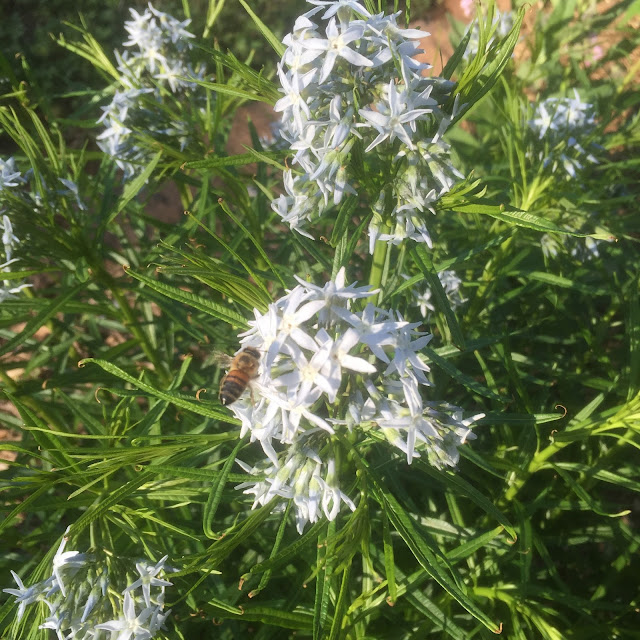 Another early-blooming plant that bees are attracted to is clover.  I even mowed around clumps of clover to give them another source of food when not much else was available to them. 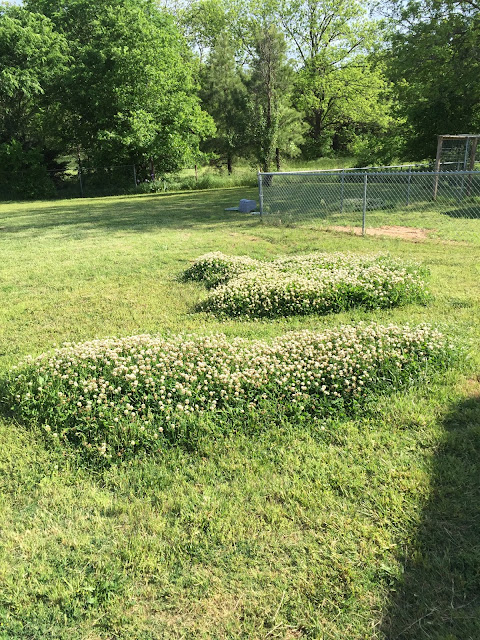 I supposed I'm becoming a little eccentric in my old age.....well, maybe a LOT eccentric.  But, hey, I'm retired (from my day job) and I'm loving it!
Posted by Windy Acres at 10:50 AM No comments: