A couple of years ago, we attended an organic growers conference.  It was well attended and we learned a lot.  One of the things I really liked was the fact that they had several hands-on demonstrations.  One of them was titled "How to Grow Pea Shoots".  That caught my interest at once.  Pea Shoots?  Really?  I had never heard of such a thing.   I have grown mung bean sprouts.  Those are the bean sprouts that are a common ingredient in most Chinese stir-fries.  Anyway, I attended the demonstration and came away eager to try this myself.

However, other things demanded my attention and it was not until early this year that I got around to it.  Basically, you just throw some pea seed onto a container of dirt and let them grow!  So, easy, right?  Well, there is a little more to it.  So, here's how I did it.

I suppose any type of pea seed would work, just be sure that the seed is not treated.  I used Dwarf Grey Sugar peas.  First, I soaked the peas in water overnight. 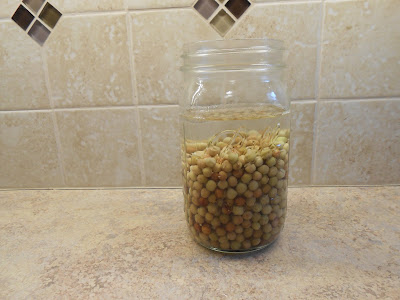 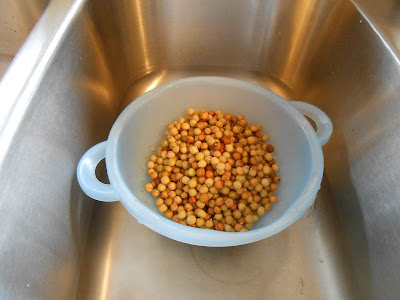 The next morning I drained them in a colander.

The next step was to fill a flat with 1.5 to 2 inches of potting soil, sprinkle the seed evenly over the surface and water well. 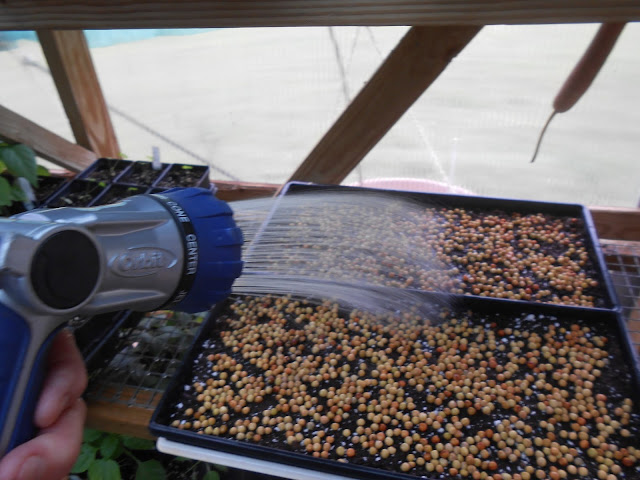 The flat should then be covered to keep the light out and maintain a moist environment.  I used another flat turned upside down, like this. 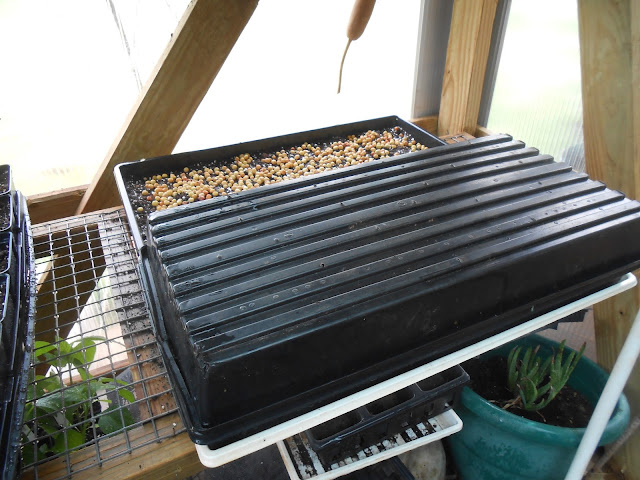 In two to three days the peas begin to sprout. 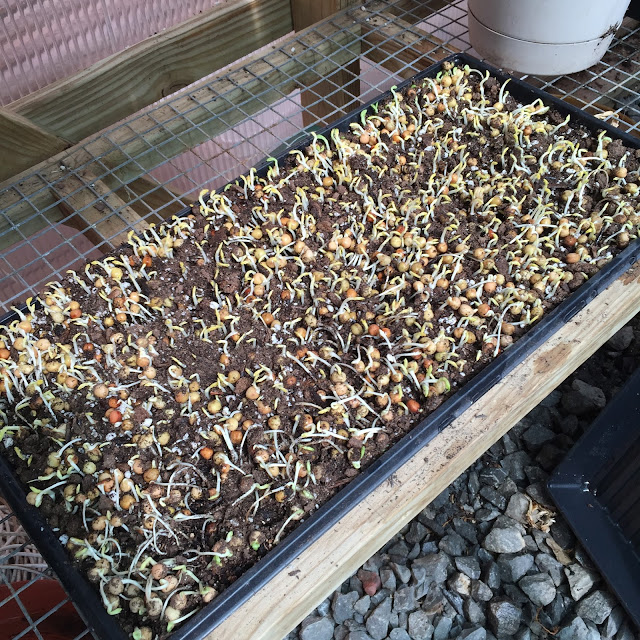 I usually leave the lid on a couple more days to force them to grow taller. Then, I uncover them and let them grow until they are about 6 inches tall.  Don't forget to keep them watered! 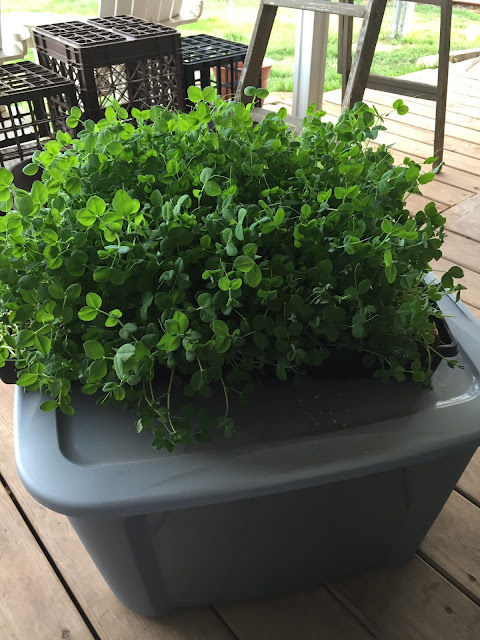 Finally, I simply use a pair of scissors and trim the tops off. 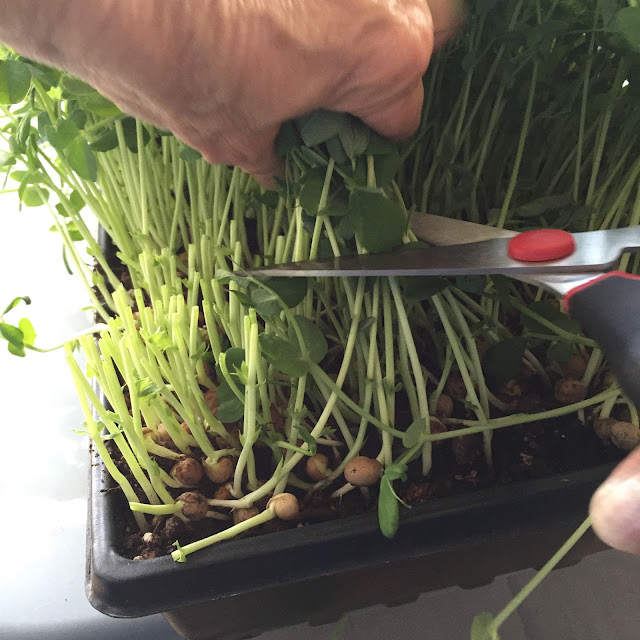 These are great in salads or cooked in stir fries.  So, try your hand at growing some for yourself.  You don't have to use anything as big as a growing flat, like I did.  You can simply recycle a shallow cardboard box or take-home container from a restaurant.  Also, we are fortunate to have a small greenhouse where I grow them, but you can just set them in a sunny window.  Just be sure to turn the container around everyday.  Otherwise, they will all grow toward the side where the light.

Pea shoots store well in the refrigerator and stay fresh for up to 2 weeks!  The secret is to NOT wash them and put them in resealable plastic bags until you are ready to eat them. Extra water in the bag causes them to deteriorate faster.  They are delicious fresh in salads or used in stir-fries.


A while back I wrote about our sweet potato harvest.  We grew them in cattle supplement tubs.

One of the sweet potatoes we harvested was huge.  It weighed six pounds! 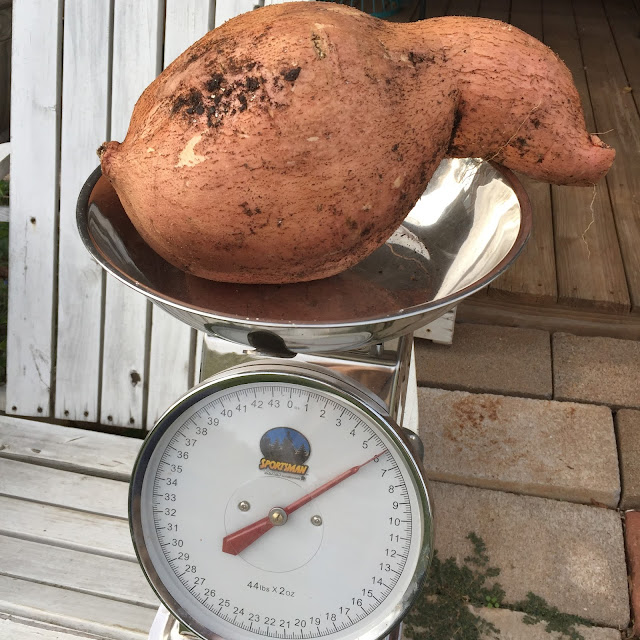 I had little hope that it would be edible, thinking  it would be too fibrous and tough to eat.  But we put it in the greenhouse to cure and this week I decided to cut into it and see if it was fit to eat.

It took a big, sharp knife to cut the monster in two.  But, it was not tough and looked like any normal sweet potato. 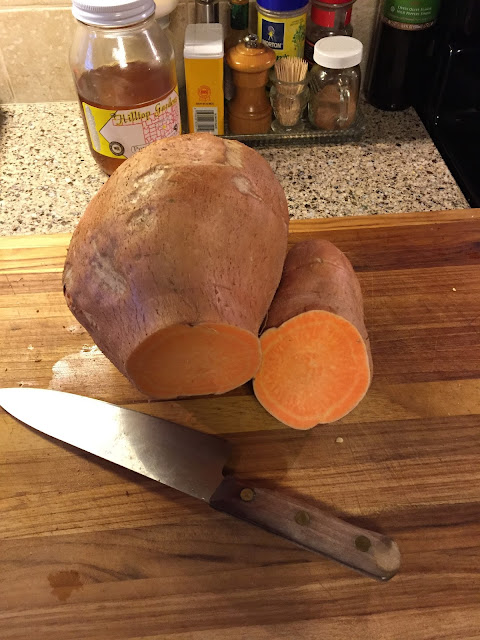 So, I cut the smaller section into cubes. 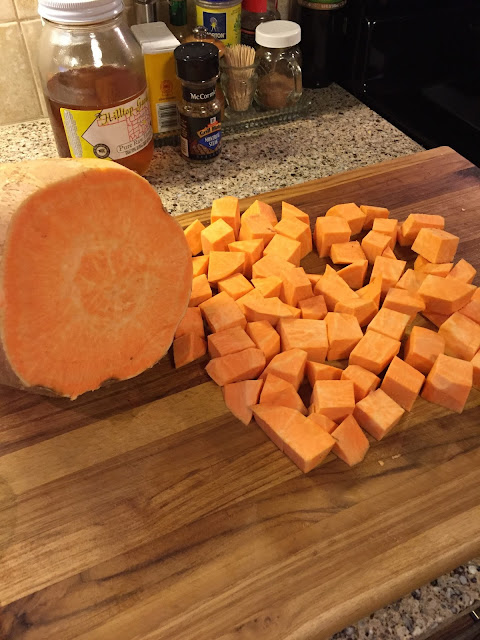 It still looked good and I cut the rest of it up.  There was way too much of it to use at one time.  So, I decided to cook and freeze it.  I could have roasted it, I suppose, but instead I cooked it on top of the stove in a little bit of water.  There was so much of it that I had to cook it in several batches.

Before freezing it, I made some sweet potato muffins.  These are delicious and have very little sugar in them. 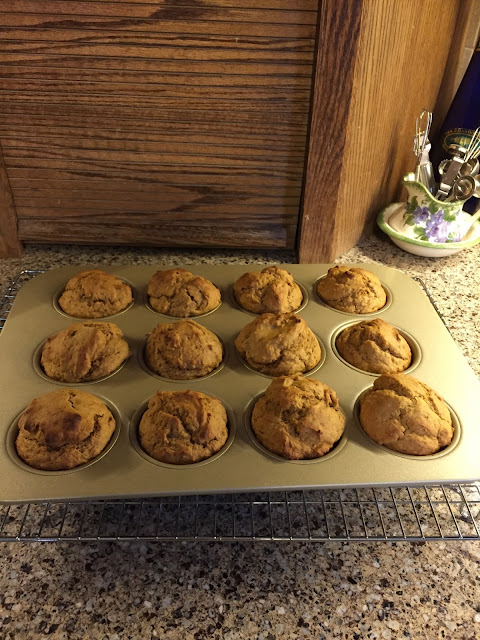 Most of the recipes using sweet potatoes I have found call for one cup of mashed sweet potatoes.  So, I divided the cooked potatoes into one cup portions.  These I sort of smushed into a roll and wrapped in plastic wrap.  I was able to fit two of these rolls into a sandwich bag.  In the end, I had two sandwich bags containing a total of four cups of sweet potatoes. 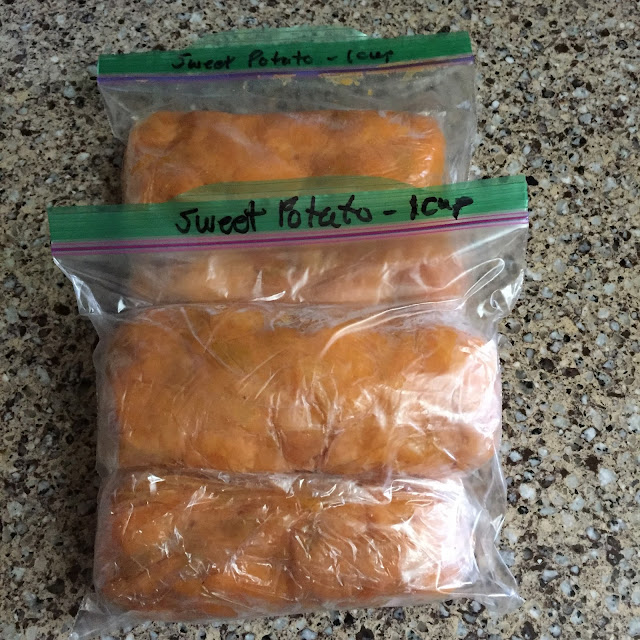 This is not all of the sweet potatoes, though.  I held out enough to make a sweet potato pie for Thanksgiving.  I've never made a sweet potato pie before, so I'll be looking for a good pie recipe in the next few days.  If anyone has one, let me know!  😃
Posted by Windy Acres at 11:47 AM No comments:

Community gardens give apartment dwellers and others, who do not have access to land where they can have a garden, a chance to have their own little garden plot.  Not only are there numerous health benefits to gardening activities, but excess produce from a community garden can help feed the hungry in our communities.   It is amazing how much one can grow in just a small 5X10 foot plot.

We recently visited our friend, Cheryl, in Portland, Oregon.  Cheryl participates in a community garden near where she lives.  The city of Portland sponsors a community gardening project in which residents can rent plots in one of the numerous community gardens scattered across the city for as little as $12.  To read more, here's a link to their website:  Portland Community Garden Project.

Cheryl took us on a tour of her garden.  She participates in the Kenton Community Garden. 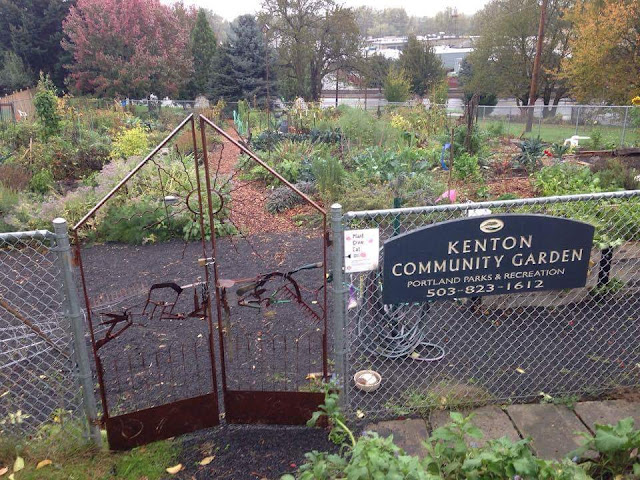 This garden was created from an underutilized city lot in 2011 and covers a little over a third of an acre.  While the land area is quite small there are quite a few plots of varying sizes included.

Here are some pictures from inside the garden. 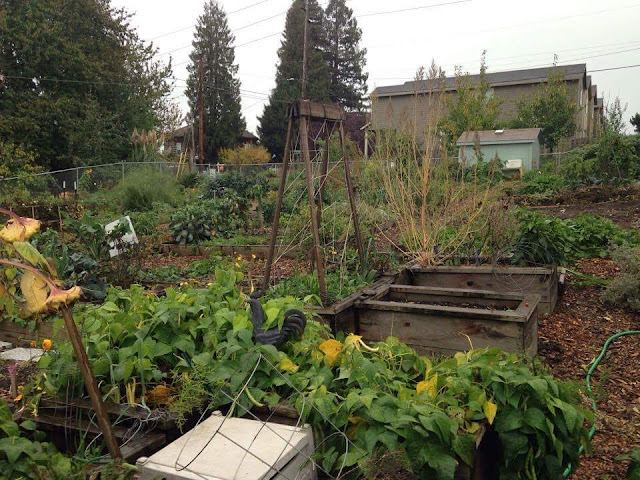 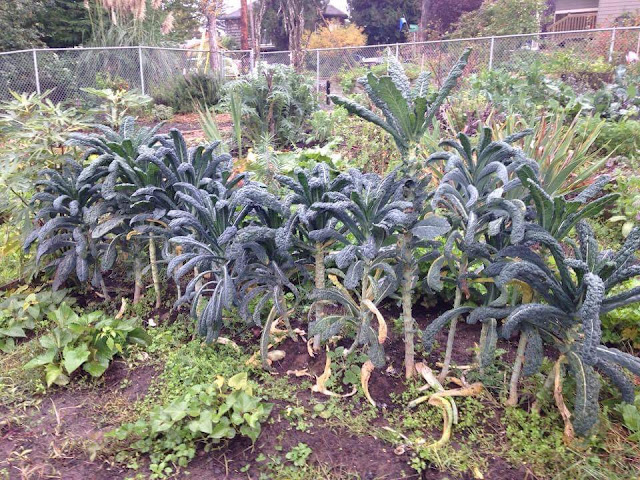 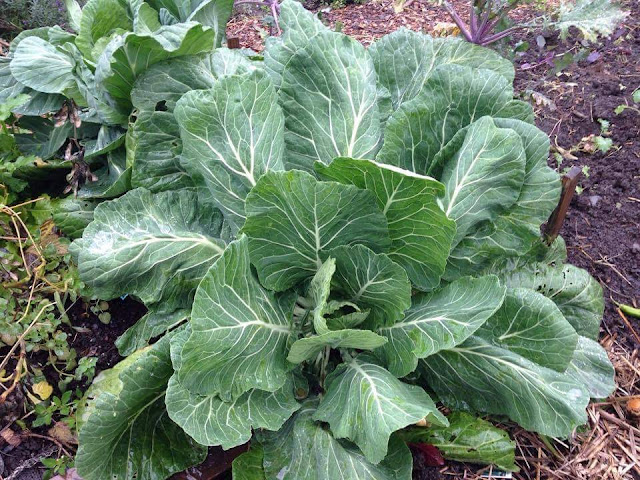 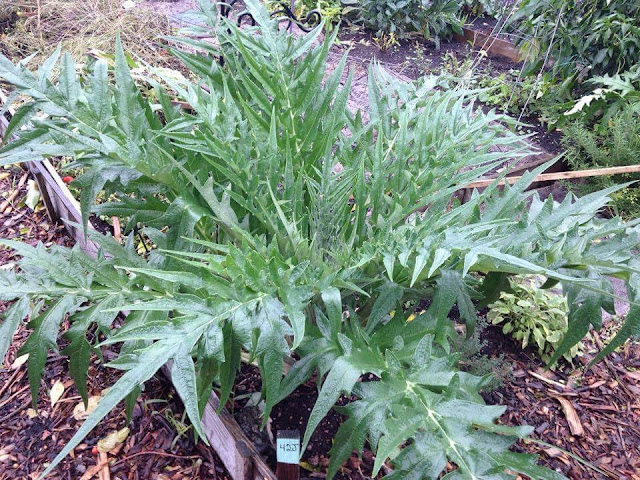 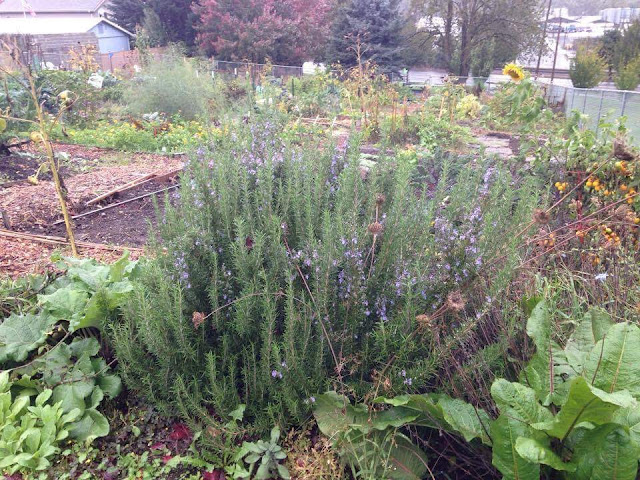 While looking for information about community gardens, I ran across this website:  American Community Gardening Association.  If you click on the "Find a Garden", you can search on community gardens in your area.