This summer I've come across a couple of very interesting insects......a Hoverfly and a Bumblebee Moth.  In each case, I thought these were different insects when I first saw them.  Keep reading and you'll see why.

When I saw the hoverfly, I thought it was a honey bee.  Here's a picture of it. 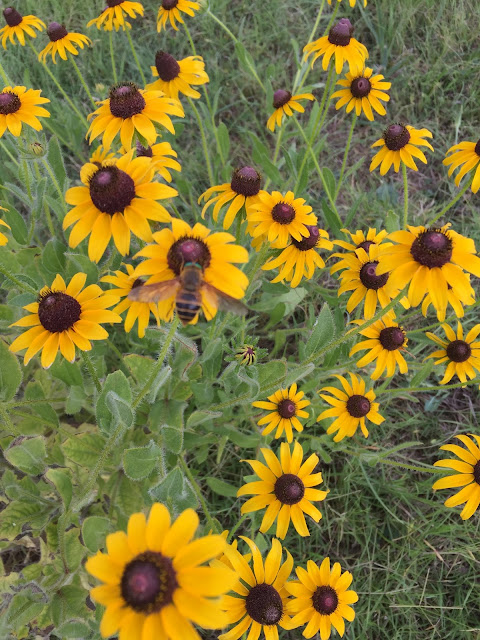 At first glance, its abdomen certainly looked like that of a honey bee.  But, it was a little bigger than the normal honey bee and then I noticed the green eyes.  A couple of years ago, we attended a a workshop for attracting native pollinators at the Kerr Center for Sustainable Agriculture.  (See blog post Native Pollinator Workshop)  I recall them mentioning a fly that looked like a bee.  This disguise helps the fly avoid being eaten by birds.  Isn't nature amazing!

As it turns out, hoverflies are important pollinators and can be found feeding at flower blossoms or around aphid colonies, where they lay their eggs. The larvae of hover flies are important predators of pests, such as aphids, scales, thrips and caterpillars, rivaled only by ladybird beetles and lacewings.

A few weeks later, I caught a glimpse of what I thought was a bumblebee.  We have a lot of bumblebees.  It was feeding on Vitex (Chaste Tree) flowers near my garden. 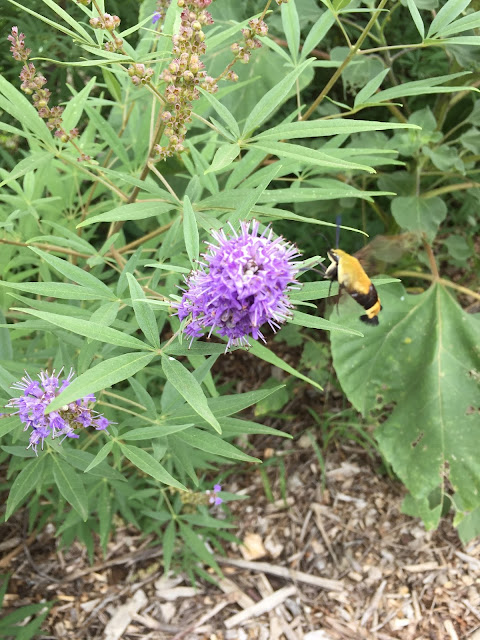 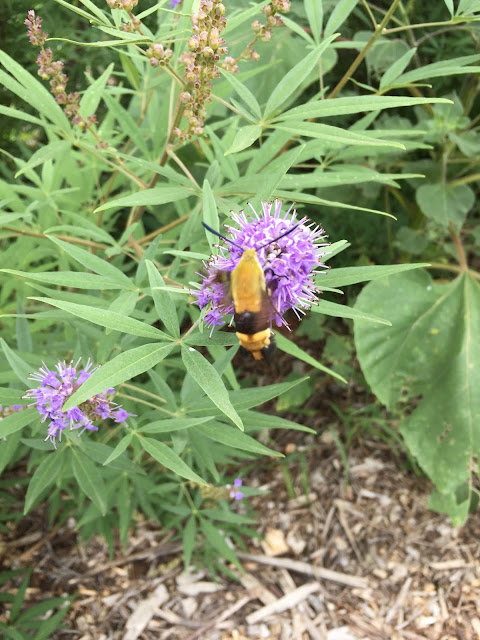 I quickly realized it was not a bumblebee because of its elongated shape and the long antennae, but had no idea what it was.  A search of the internet revealed this to be a Bumblebee Moth.  A fitting name, don't you think?  Again, the coloration mimics that of a stinging insect and helps protect the moth from predators.

Bumble Moths are members of the Hawk moth family and are also known as the Snowberry Clearwings. This name refers to the wings, which unlike those of other moths, are translucent.  Like other moths, they have long, slender tongues that are rolled up when not in use which allow them to forage deeper into flowers than other insects.  The adults feed mainly on nectar from flowers, including snowberry (which contributes to their name) and, obviously, Vitex flowers.

Next time you are outside, slow down and take a closer look at the world around you.  There are all manner of fabulous things hiding just under your nose!